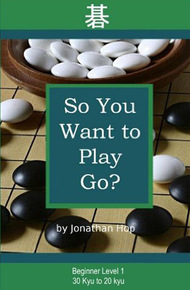 Jonathan Hop has been a Go enthusiast for over 10 years. He started playing Go in university and was immediately hooked. In order to learn more about the game, he traveled to South Korea and China, and has written the So You Want to Play Go series so that players around the world can enjoy the game. Aside from teaching Go online through his Youtube series "10 Minute Go," Jonathan is a Math and History teacher working in Qingdao, China.

So You Want to Play Go? by Jonathan Hop

The "So You Want to Play Go?" series is all about the ancient Chinese strategy board game known around the world by its Japanese name, "Go." A 4,000 year old game, Go became popular worldwide in 2016 during the "Man vs. Machine" match in South Korea, where Google's AI "Deep Mind" was able to beat one of the best human players in the world, South Korea's Sedol Lee. In ancient times, the game of choice for emperors and generals across the Orient. The game is amazingly simple, with only a handful of rules to follow. From this simplicity, the game dives into complexity that mankind has yet to fully grasp.

"So You Want to Play Go?" is a lighthearted, gentle introduction to the game. You'll learn the basic rules, some beginner strategies, and you'll be able to challenge your friends in no time. The book is not just a strategy guide, but also an introduction to the history and philosophy surrounding the game. Playing Go has a great many benefits, from developing Mathematical ability in children, to increasing one's ability to focus and concentrate. Join millions of players from around the world, a community of players connected by a passion for a game.

"A perfect introduction to the ancient Chinese strategy game from a veteran player and teacher. If you were fascinated by Google Deepmind's AlphaGo win, you'll want to check this out." – Simon Carless

Alright, so you've got a Weiqi board (remember, it's pronounced Way-Chee) from a mail order service or you've just downloaded KGS or another Weiqi server. You've seen people playing the game at a coffee shop or one of your more eccentric friends spends his Friday evenings yelling in agony "Why can't I make two eyes?!" and you finally want to understand what is going on. Well good for you! Weiqi is the one of the world's oldest strategy board games and people have been pulling their hair out trying to play it for the last four thousand years. It is rather simple as far as rules but the strategy is so complex that no matter how strong you are you are just as confused. Well enough gab, lets learn the rules of Weiqi. There are only a few.

Weiqi is played with a board and two colored stones, Black and White. Black plays first except when receiving handicap, and both players alternate placing a single stone on the board wherever they think is best. Every stone you play remains in that position unless the stone is captured. Board sizes can vary from 9 x 9 , 13 x 13, and 19 x 19. I suggest starting off on a small 9 x 9 board. You place stones on the intersections of the board, not on the squares themselves. The object of the game is to greedily grab as much territory on the board as possible. Whoever has more at the end wins.

Thank you I'm glad you asked. By territory, I mean the intersections on the board. One intersection equals one point. All you have to do is build walls to encircle the intersections (hence the name of the game, Weiqi, which means encircling game). Here are two examples: