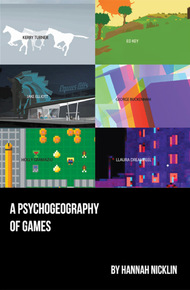 Hannah Nicklin is a writer, game designer, academic and artist working at the confluence of performance writing, community-based practices and digital art and game design. Hannah's work is often driven by an interest in the role of storytelling in everyday life; in enabling players, audiences and participants to reflect on their lives, lived in the inextricable context of one another. She works hard to make performance/playful experiences that can be accessed by everybody, proactively, by taking work into communities, by producing and programming experimental work, and by being a bridge between creative practices.

She has worked with and for organisations such as The Royal Shakespeare Company, The V&A, Rock Paper Shotgun, Alphr, The Space, Twisted Tree Games, Hide & Seek, Coney, and spoken at events like Videobrains, Now Play This, Feral Vector, Gamecity, and EMP Fest. She has also lectured in socially engaged practices, digital narrative and game design at several universities, including UEL, UAL, RCSSD, and Goldsmiths.

A Psychogeography of Games by Hannah Nicklin

A Psychogeography of Games contains 6 creative critical responses to game design, based on a series of talks and articles prompted by Hannah's 6 month residency at Videobrains June-November 2015. Prompted by the question 'how do the places and spaces important to game designers affect their game design' Hannah went for 6 walks in places important to Jake Elliott (Kentucky Route Zero), Kerry Turner (Heartwood), Llaura Dreamfeel (Curtain), Holly Gramazio (How To Be A Blackbird), Ed Key (Proteus) and George Buckenham (Cubes), and wrote about the experience. The book features the texts for either performance or published originally on RPS, accompanied by extra thoughts, ideas, quotes and drawings. Plus an introduction. A Psychogeography of Games attempts to push the field of critical and creative discourse around video games - producing works that gently respond in form as well as content to the creative questions at the heart of contemporary game design.

"A happily meandering interview travelogue and thinkpiece, connecting with creators like Jake Elliott (Kentucky Route Zero), Holly Gramazio (Tiny Games) & Ed Key (Proteus) and talking to them about life, their environment and how it affects their games." – Simon Carless

This project started as an inkling in my mind while I was playing Kentucky Route Zero (KRZ). KRZ is heavily influenced by psychogeographical thinking: the notions of 'dwelling' you find in the Museum of Dwelling, the way the landscape can shift around you, the means by which debt and decay is

written into the architecture and geography of the game.

Psychogeography is a word I first discovered eight years ago reading about the Situationist International for a PhD in games, play, performance, and agency as tools in the fight against contemporary capitalism. They're super interesting, but like most philosophy, a little bit difficult to access straight away. In talks I summarise the Situationists (as they didn't really like to be called) as 'some drunk french dudes in the 60s', because, well, they were. As well as being drunk and French they did some pretty cool thinking and wrote a lot about revolution (in that way primarily white drunk affluent French dudes can). What's interesting about them is that they thought about the revolution we need now - not from the oppression (e.g.) of class or royalty, but from the way capitalism oppresses our natural sense of self, desire, and being, to make money from and of us.

The Situationists proposed tactics in the face of capitalism. (All of which have inevitably been eaten up again - one of the reasons capitalism is so effective). Things like collage (take

the messaging of the system and make new messages with it), 1970s punk (McClaren saw the energy and basically formed the Sex Pistols as a kind of boy band around it), street

games, flashmobs, subvertising; all of these can draw lines back to the tactics proposed by those drunk SI guys and the world they saw that 'degraded desires into needs' leaving us unable to feel, think and act authentically.

They're called The Situationists because they talked about situations - moments in time. They wanted to re-make our situational environments to find ways of picking out the tendrils of what (for example) marketing people want us to feel, think and do, from what we authentically feel, think and do (authenticity in an era of late capitalism is a problem for another day). Our situations are our human, architectural, spatial, social, sexual, political context. Interestingly they often called for games as a way of doing this - though they meant active agency-driven street play, not so much videogames.

Pyschogeography is their word for how the places and environments of our lives (largely urban, for those Parisians) affect us. They wanted to harness and re-make how our environment makes us. And that thought - 'we are affected by our environment, and we can affect ourselves by re-shaping that

environment' - has since been developed by many people, and seemed the right one for the project that sprang into my mind playing KRZ last spring. I proposed it to Jake Tucker for my 6 months at Videobrains, deciding I would go on walks with game designers in places important to them, to talk about how place affects their game design. It's a reasonably obvious proposal, when you write it down like that; that the environment of artists should affect their art is not extraordinary. But like most concepts for writing about art, it's a means to an end, a theme for a conversation that just allows interesting people to be... interesting.

I immediately invited Jake Elliott co-creator of KRZ, then thought of others for whom place is an interesting heart/prompt for their work. This led me to Holly Gramazio (Matheson Marcault, Hide&Seek, How to be a Blackbird), Kerry Turner (co-creator Heartwood, TheRabbitClub), George Buckenham (Cubes, Fabulous Beasts, Mutazione), Ed Key (Twisted Tree Games, co-creator Proteus, Forest of Sleep) and Llaura Dreanfeeel (Curtain, Istanbul Texas). Thankfully they agreed, and variously I walked with them in Shoreditch/Kentucky, Battersea/the South Bank, Stepney Green to New Malden, in Dublin, Cumbria, and Brighton by way of Malham Cove, Yorkshire.

The following pieces of writing represent our journeys. Each piece has a small introduction on our approach, and anything else that felt relevant. I hope you enjoy them. Thanks for reading.