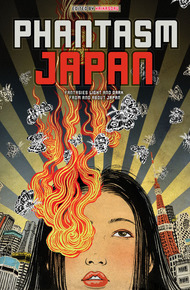 The secret history of the most famous secret agent in the world. A bunny costume that reveals the truth in our souls. The unsettling notion that Japan itself may be a dream. The tastiest meal you'll never have, a fedora-wearing neckbeard's deadly date with a yokai, and the worst work shift anyone—human or not—has ever lived through. Welcome to Phantasm Japan.

From "Those Who Hunt Monster Hunters" by Tim Pratt

The monster hunter owns several samurai swords and often wears a fedora. He likes to practice with his wooden sword in the backyard—the neighbors complain when he practices shirtless with bare steel—and though he's never taken a kendo class, he watches a lot of instructional videos on YouTube and believes if tested by a master he'd rank at least fifth dan. He speaks enough Japanese to impress a non-Japanese-speaking date at a sushi restaurant, and loves the films of Kurosawa, the entire Zatoichi series (he sometimes practices with his wooden sword while blindfolded), and classic anime, from before it became popular in the West. He hasn't mastered the trick of catching a fly with chopsticks yet, but he's working on it.

His favorite thing in the world is sleeping with Asian girls, or at least it was until he discovered the pleasures of hunting monsters.

This isn't one of those stories about a delusional lunatic who believes he's hunting monsters, when really he's killing ordinary people. The monster hunter actually did kill a monster, or at least one monster, and he'd love to kill more.

The monster hunter doesn't kill monsters with his samurai swords—not yet, anyway. So far he's used a knife, the Internet, a bottle of lighter fluid, and a long-handled lighter, the kind you use to fire up a charcoal grill.

The monster hunter enjoys talking about himself in the third person, and he sometimes falls into that habit in conversation, but he isn't the one writing this.

Here's how the monster hunter kills his first monster. (Basically. Some details might be wrong. But basically.)

After stalking the creature for weeks, the monster hunter comes to understand its habits and its routines. Three nights out of four the creature just goes to bed in its apartment in Oakland. But every fourth night, as he sits in his car watching through binoculars, something flits out of the monster's open bedroom window, moving almost too fast to see, streaking off into the night sky. At first he thinks it's a bird or a bat, but finally he gets up the courage to creep in the dark to the monster's window and peer inside after the thing has flown away.

The monster's body sprawls on top of the covers on its bed, headless, its neck an open wound, a clean straight cut, but not bleeding. At first he thinks the body is dead, but then he sees the rise and fall of its chest. Headless or not, it's still breathing. Only then does the monster hunter realize he's been stalking a monster and not a woman. A cold fear grows in him, but it grows alongside a hot excitement. This explains everything, he thinks. She wasn't even human. No wonder.

The monster hunter gazes for a while at the monster's body, its camisole top riding up a little, exposing a smooth expanse of belly, and the monster hunter is seized (again) by a desire to touch that skin, to taste it, to see how hard he'd have to press his fingers into that flesh to leave a mark that would last for days. He wonders, briefly, if he could climb in through the window, if he could touch the monster's body, if its wandering head would notice.

He doesn't do that. Instead he goes home and starts looking up things on the Internet, and when he figures out what he's dealing with—a sort of vampiric creature from Japanese folklore, a monster whose head detaches and goes flying in the night, looking for innocent victims to bite to death—he resolves to rid the world of its evil. Fortunately, the Internet explains when such creatures are most vulnerable and how best to dispatch them.

It's the greatest feeling he's ever felt.

The kind of monster the monster hunter killed was a nukekibi, though the monster hunter misremembers his hasty research and believes he killed a rokurokubi instead. It's a common mistake, though I'm not sure why, since the former is a woman whose head detaches fully from her body and flies independently through the night to hunt for victims to slake its terrible thirst, attacking with bites and deafening screams, while the latter has a neck that elongates—like a more limited version of Mr. Fantastic from the comic books—allowing her to spy on humans. The two are both yokai, bewitching creatures capable of shape-shifting, but otherwise they're not all that similar. I guess to the monster hunter all Japanese monsters look alike.

The monster hunter's password for this site was "rokurokubi," with the "o"s replaced by zeroes. I like to think I would have figured it out eventually, but I didn't need to—he has the passwords for all his sites saved in his browser.

The monster hunter believes there are some circumstances in which a person is obligated to have sex. He believes women should always shave their legs; on the more explicit sites he makes it clear he believes they should shave everything, because it's "just common courtesy to keep everything clean."

He does know that "wherefore" means "whey" and not "where," and that the sun is larger than the earth, and he isn't aggressively or obviously homophobic, and he mostly spells things correctly. Amazingly, he doesn't have a bad kanji tattoo. He could, in fact, be worse.