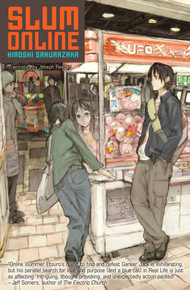 Hiroshi Sakurazaka was born in 1970 in Tokyo. After a career in information technology, he published his first novel Modern Magic Made Simple (Yoku wakaru gendai mahou) in 2003 from Super Dash Bunko, a popular light novel imprint for young adult audiences. The first novel was quite successful is now an ongoing series of seven volumes. It has also been adapted as a manga, in 2008, and as a televised anime series in 2009. He published All You Need Is Kill with the same imprint in 2004, earning a Seiun Award nomination for best science fiction novel. His 2004 short story "Saitama Chainsaw Massacre" won the 16th SF Magazine Reader's Award. His other novels include Characters (co-written with Hiroki Azuma) and Slum Online, released in English in 2010 by Haikasoru.

In 2010, Sakurazaka started an experimental digital magazine AiR with Junji Hotta. He continues to be one of Japan's most exciting writers of both light novels and adult science fiction.

Etsuro Sakagami is a college freshman who feels uncomfortable in reality, but when he logs onto the combat MMO Versus Town, he becomes "Tetsuo," a karate champ on his way to becoming the most powerful martial artist around. While his relationship with new classmate Fumiko goes nowhere, Etsuro spends his days and nights online in search of the invincible fighter Ganker Jack. Drifting between the virtual and the real, will Etsuro ever be ready to face his most formidable opponent?

Tetsuo dropped into a fighting stance.

> Who the hell do you think you are?

> I don't give a rat's ass about the name of some scrub who does a speed dash inside a bar. Running indoors is for dogs and children too young to know better.

> You looking for a fight?

That was Masumi, butting in.

> That tournament's bringing these guys out of the woodwork. I bet this one thinks he's got the brass to take on the top four.

> To fight him, I know. You really want a fight, go to an arcade. You can find Pak out in Shinjuku.

> That's a little behind the times, isn't it?

> You just don't get it, do you? Times may change, but holy ground is holy ground.

Pak was the best player in Versus Town. In RL, he was an editor for a video game magazine. Even I had heard the stories about him showing up in arcades on Kokusai-dōri on the weekends. One of the many pilgrims to the "holy ground" that was the arcades of Shinjuku.

But all that was a decade ago, long before the Internet had taken root. It used to be, people who lived in Mizuhodai could only play against other people who lived in Mizuhodai. If they didn't like it, they could hop on a train to take them to Shinjuku. That was all well and good for people who lived in Mizuhodai. Saitama Prefecture wasn't especially far from Tokyo. But if you lived in Hokkaido or Kyushu, it was a different story. There weren't a lot of people who could afford to catch a bullet train to Tokyo just to ride out and play some games. Now, thanks to the Internet, the best players in the world were only as far away as your television. You could play your neighbor, you could play people in Hokkaido and Kyushu, you could even play people in the United States. Earth was a tiny place as far as the light pushing those packets back and forth was concerned. Nobody needed the rickety old arcade that shook every time the Tōbu Tōjō line passed by overhead anymore. This was the first time I'd heard anyone suggest that an arcade was the place you had to go if you were serious about playing. Why should anyone have to resort to going to a real city in RL to accomplish something you could do online?

Ricky the snake boxer waved his hand. The gesture had already gotten on my nerves.

> You're not as good as you think. You think you're some kind of wolf, a real leader of the pack. But you're just another pig to the slaughter.

> You forget how to read? I said you were a pig.

> You want to take this outside?

Tetsuo and Ricky walked out of the bar, one after the other. Behind them, I could see Masumi shrug one last time at the edge of the screen.

We stood facing each other in the street in front of the saloon. Half the characters inside came spilling out through the swinging doors to watch the fight. It was Ricky who spoke.

Snake boxing, or shéquán, is a Chinese martial art named for its trademark serpentine movements. When the developers were laying the foundation for Versus Town, they called in a famous Hong Kong movie star to do all the motion capture for the game. Apparently the guy had played a snake fist stylist in one of his movies. Along with eagle claw, it was one of the most powerful schools in the game.

I counted slowly to three before inputting the speed dash command. Tetsuo rushed forward and threw his fastest punch. Ricky dodged the punch with a crouching back dash. I pressed the A button to cancel out of the kick I'd already buffered. Move. Block. Tetsuo crouched as he moved forward and to the right, girding himself against low attacks. Ricky moved at an angle, tracking Tetsuo's path. They spun 60 degrees, always facing each other.

So long as he was crouching, high punches and kicks would sail right over Ricky's head. You had to be able to reach your opponent's back to throw him, so doing a kick-cancel throw was out too. Ricky had dodged Tetsuo's punch in the most effective way possible. If Tetsuo had kept attacking, more likely than not he would have taken a counterhit.

My knuckles whitened as they gripped the stick. Ricky made his move.