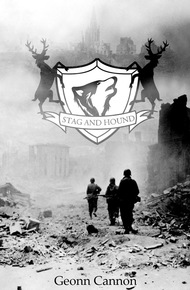 Stag and Hound by Geonn Cannon

Paris in Winter, 1943. The Loupin pack is a group of canidae operating as a cell in the French resistance, sabotaging German supply lines and taking out as many German soldiers as they can. After a series of successes, they're dealt a staggering blow in a surprise attack that leaves their leader, Philip, dead. Philip's lover, Simon, becomes the pack's new leader, but the fight has gone out of him. He and the rest of the pack retreat to occupied Paris where he drowns his grief in whatever alcohol can be found in any taverns that are still open. He's finally pulled out of his stupor by the arrival of a British Intelligence officer named Kenneth Mackay, another canidae who reveals the attack on their cell was not an isolated incident. It was part of a concerted effort by the Germans to clear northern France of any opposition for reasons unknown.

Simon puts aside his grief and sorrow to discover the truth behind Philip's death. Teaming up with the British soldier, Simon and the pack return to the countryside they abandoned months before. They soon find themselves facing a fierce and cunning enemy whose plans could bring countless deaths and untold destruction.

In this novel set in the world of 'Underdogs,' Simon, Kenneth, and the rest of the Loupin pack are the only thing standing between the new darkness and must do everything in their power to stop it... even if it costs their lives.

I first encountered Cannon's canidae (werewolves) in his urban fantasy series Underdogs, and was delighted to find that he had explored their history in two more novels. Stag and Hound is brand new, a nail-biting WWII adventure set in Occupied France, where a pack of French Resistors and an English agent must find a way to work together against terrifying odds. – Melissa Scott

Lieutenant Kenneth Mackay tried to ignore how flimsy the floor felt under his feet, just as he was ignoring the temperature of the night air that whipped across the exposed flesh of his face. He had to push those things far out of his mind so he could focus on the task at hand. Ordinarily he didn't have a problem putting aside discomfort for the greater good, but this time was different. He hated being in the air, and he didn't know any canidae who felt differently. It was hard enough getting over his instinctual aversion to flight, but the wolf side of him accepted it was a necessary part of the war. Now, though, he was asking the wolf to jump out of a perfectly serviceable airplane with only a backpack between him and certain death.

Intelligently, he knew the safety statistics of what he was about to do. He had been instructed in the proper procedures and was confident he would reach the ground safely. That did nothing to calm the primal fear and his racing pulse. He stretched out his fingers. He clenched his hands into fists. And he measured his breathing to ensure he remained calm until they were over the drop zone. The officer safely strapped to the plane's hull gave him the thumb's-up. Kenneth managed to copy the gesture, looked out into the endless dark, and took a running leap into oblivion.

He spread his arms and legs as soon as he was clear of the plane, hands slightly raised so they would be even with his face. He plummeted faster than he expected, blind to everything on the ground save for a few lights in the towns huddled around the outskirts of Paris. He knew in the daytime it would be a green, yellow, and brown jumble, an earthen stained glass surrounded by thick and mossy forest. It was winter now, and hopefully the ground would be covered with a nice cushioning layer of snow. He was aiming for one of those forests now. That was the plan, at least. He hoped the wind predictions and the flight plan were both accurate. If not, he was about to land in enemy territory with no idea where to go or how to find help. The only thing in his control was the ripcord, and he tugged it to release the parachute and end his freefall.

Kenneth landed without incident, exhaling sharply as he trotted a few steps across uneven farmland. He caught his breath and used a flashlight to check his compass. He could just barely hear the planes droning engine in the distance. They were going in the correct direction, it seemed. That was a good first sign. He turned his light to his wrist and checked the time. He had four hours to make his meeting, and he doubted the resistance cell would wait for him if he was late.

He quickly shed his pack and flight suit, gathering them both into a satchel that would slip over his forelegs. Once he was naked he dropped down into a runner's starting position. He let the transformation pass through him like a full-body shudder, his bones and muscles twisting and popping into a new arrangement. He resisted the urge to howl his joy at being back on the ground and settled for stretching his legs.

Sorry, old boy, he thought to his primal side. Needs must when the devil drives. But now you get to really show off. The countryside is yours. Get me where I need to be and everything else is up to you.

He felt the wolf taking over. It was a general wash of animalistic and mindless urges. The scent of the forest bloomed into life all around him. At the moment it didn't matter that this was enemy territory. The only thing that mattered to the wolf was that it was new, unexplored territory. It paused long enough to slip its front legs through the straps of the satchel. The bag was designed so that it could be tightened and secured by taking a strap in the wolf's jaws and pulling tight. Kenneth did so, jumped and darted in a quick back-and-forth motion to ensure it wouldn't move around too much, and then gave over the reins to the wolf.

The animal's extreme joy washed over him as it broke into a dead run. Four hours to the rendezvous point, and the wolf could move ten times faster than a man. Even better, a wolf wouldn't get stopped by German roadblocks or asked for its papers. That would give his four-legged alter ego ample time to explore the wonders of the Parisian forests before it was time to get to work.