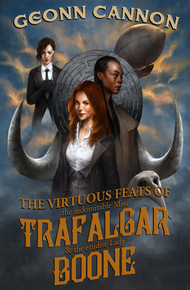 In 1899, a secret society tried to use a young woman to bring an ancient evil into the world. Twenty years later they will return to finish the job.

After the Great War, London is settling once more into the gentle routine of peacetime. The airships that once protected England's coast now ferry people back and forth across the Thames, the magically-inclined are free to return to their normal work, and those who seek treasures left behind by ancient civilizations are again free to explore. Dorothy Boone shunned a life of luxury to follow in her grandmother's footsteps by uncovering the mysteries of "the worlds that came before ours." When a package explodes upon delivery to Lady Boone's townhouse, she is drawn into an unlikely alliance with her nemesis, Trafalgar of Abyssinia, to find the culprit.

Welcome to the world of Trafalgar and Boone, a world where airships battled in a Great War that was fought by soldiers who utilized magic and summoned monsters to do their bidding, a world that they must defend by working together to stop an evil far greater than either of them could ever have imagined.

The title tells you exactly what kind of story you're going to get: grand Victorian/steampunk adventure — except that the protagonists are queer women, and several of them are also women of color, all of whom have achieved their positions in beautifully period ways. It's a full-throttle adventure with a sly sense of humor, and I adored both the title characters, rival treasure hunters forced to cooperate against a mysterious enemy. – Melissa Scott

In London's alleys and byways she learned how to steal, how to fight, how to use magic, and how to avoid being detected by the police. Her hands were quick, her mind quicker, and she quickly started earning her keep with the other thieves and hoodlums occupying London's demimonde.

Her life changed the day she noticed Dorothy Boone out for a stroll. She was walking briskly, her clothes indicating a modest salary but there was no denying she was wealthy. Her shabbiness was far too contrived to be real, and she wore a pocket watch that anyone truly destitute would have pawned ages ago. Beatrice followed at a safe distance until she discovered the woman's residence. She waited until Dorothy left again, then found a way inside.

It was the mother lode. Even before she discovered the armory, before she even knew there was a second or third wing to the home, she was trying to figure out which antiques she could carry away and which she would have to come back for later. She sincerely hoped there would be a later. Artifacts, artwork, an array of gewgaws she couldn't begin to identify... Part of her feared that the things she saw were invaluable, which would be useless if she couldn't find someone willing to buy them from her.

She was still doing reconnaissance when she picked up what looked like an ordinary stone tablet to see what was inscribed on the face of it. Her lips formed the unusual words carved on the face of it as she tried to make sense of it. It was a moment before she realized her arms had become unusually stiff, and her body had acquired a new weight that made her feel anchored to the floor. She managed to unfold her arms to put the tablet down, but the damage had already been done. Her legs wouldn't move her farther than a few steps, and her hands froze on the way up so she could see the gray stone spreading across her flesh.

There were no windows in the room so she had no idea how long she stood there. Her confusion wasn't helped by the fact she was forced to sleep with her eyes open and had no idea how much time passed before she woke. It might have been eons, but she never became hungry or thirsty. At first she thought that was a mercy, but the longer she remained entombed she realized it was part of the punishment. She would not die of natural causes, but she would pray for death long before her wish was granted.

She was asleep, or more accurately unconscious, when she finally heard movement elsewhere in the house. A woman humming softly, the steady drum of footsteps on the stairs. The owner of the home went into her bedroom for a time, then finally came into the room where Beatrice stood frozen. The redhead stopped dead in her tracks and stared at the intruder as if she was nothing more alarming than a misplaced shoe.

"Crumbs," Dorothy Boone muttered. "Where in the blazes did you come from?"

She stepped in front of Beatrice and looked into her eyes. Beatrice had no choice but to stare back. After a moment Dorothy nodded and began searching the nearby tables. Finally she found the tablet. "The Medusa Tablet... bloody hell. When did I leave that lying about?" She looked at Beatrice again. "Hell of a security system, however. Hello? Are you still conscious in there?" Dorothy stroked Beatrice's cheek with the back of her hand. "Warm. Hm. Okay. Remain calm. My name is Dorothy. I'll see what I can do to help you."

Dorothy left. If Beatrice had been able to move her lips she would have called out to her to stay. It didn't matter that even if Dorothy could save her, she would in all likelihood call the police to cart her off immediately afterward. The mere presence of another person, and a touch even of flesh on stone, had been enough to overjoy her. She felt as if she was crying even though she knew that was preposterous. But Dorothy was already gone, and Beatrice could only remain standing as she had stood for untold days while her erstwhile victim sought ways to save her life.

She returned an hour later with a shallow dish filled with a viscous fluid. "I had to cobble this unguent together from things I had lying about. Hopefully it will do the trick." She brushed her sponge over Beatrice's cheeks and brow. The ointment was thick, and stung like beestings where it coated her cheeks and chin. She was certain it wasn't working, already convinced that even the homeowner's knowledge wouldn't be able to save her. The thought distressed her to the point that a single tear fell from the corner of her eye. It was only after it fell from her lashes that she realized it was proof the ointment was indeed working.

"It's all right," Dorothy said softly. "It's a slow process, but it will work. Just relax."

It took the better part of an hour for Dorothy to sponge the unguent over Beatrice's entire body. Her clothes resisted the treatment, leaving them stiff and uncomfortable, so Dorothy retrieved a robe for her to change into. "The ointment won't harm your skin, but it would probably be best not to let it dry. Come with me. I've prepared a bath."

Beatrice soaked in Dorothy's bathtub, taking her time to enjoy the simple pleasure of clenching and stretching out her fist. She watched her muscles move under the skin, rolled her head forward and back, and listened to the crackle and pop of her bones as they moved for the first time in days, perhaps weeks. The movement of air on her flesh was almost sexual, almost too much for her to bear, but sitting in the water was something she could tolerate.

Finally she put on the robe and went downstairs to face her punishment. Dorothy was sitting in the parlor with a book open on her lap, but she closed it on her finger when Beatrice appeared. She had changed out of her traveling clothes and wore a simple burgundy blouse over a dark purple skirt.

"How long after my departure were you ensnared?"

Dorothy stood up and returned the book to its shelf. "Three weeks, six days, eight hours. Give or take a few minutes, of course." She turned to face Beatrice. "I can't imagine what an ordeal that was, but I'm certain it was..." She scoffed at herself. "I was going to say 'unpleasant,' but the truth of the matter is that it must have been a literal hell. I apologize."

Beatrice furrowed her brow. "I w-was trying to rob you." Her voice was little more than a croak, and the air felt unbelievable cold on her skin. She realized she was swaying, shifting her weight from the balls of her feet to the heels. She felt as if a strong breeze would topple her. "I broke into your home and rifled your things."

"The punishment hardly fits the crime. That tablet was found on a small island in the Cyclades. There were men and women in the cavern who had been trapped in stone for centuries. Our expedition attempted to free them but... the damage to their minds was too great. They had become deranged. More animal than people. We were forced to do the merciful thing and kill them. One of our own men was afflicted, but we freed him after a few hours. Even so he required a great deal of recuperation time. Four weeks..." She shook her head. "If you would like a proper rest, I have a spare bedroom. There is food in the kitchen as I'm sure you must be famished."

"Why are you being kind?" Tears rolled down her cheeks. "You should be alerting the constables, you should be..."

Dorothy crossed the room. "You're not well, dear. The trauma you've gone through has left you weak in mind and spirit. I was careless with a dangerous artifact and you suffered the consequences. Shall we call it a draw?" She took Beatrice's hands in hers. "I am Lady Boone. Dorothy. And what is your name, dear?"

"It's a pleasure to make your acquaintance, Beatrice Sek." Beatrice stared at her in disbelief and Dorothy rolled her eyes. "Oh, please. I've made friends under circumstances far stranger than these. Come now. I'll show you to your room."