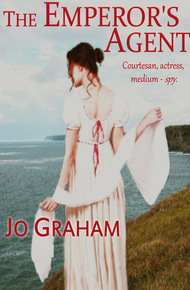 Jo Graham worked in politics for fifteen years before leaving to write full time. She is the author of the Locus Award nominated Black Ships and the Spectrum Award nominated Stealing Fire as well as seven books of the top selling Stargate Atlantis: Legacy series. She is also the author of the series The General's Mistress, The Emperor's Agent and The Marshal's Lover, which mix history, magic, and spy adventures. She has also written two interactive novels with a third due in 2021, and two books on pagan spirituality. She has a space opera, Sounding Dark, forthcoming in 2021.

The Emperor's Agent by Jo Graham

1805: Europe stands poised on the brink of war.

Elza is content with her life in the demi-monde, an actress and courtesan in the glittering society of France's First Empire, but when her former lover is arrested for treason, Elza is blackmailed into informing on her friends and associates. She has one alternative — to become the secret agent of the most feared man in Europe, Napoleon Bonaparte!

France's invasion of England is imminent, but a spy in the camp of the Grand Army threatens the secret plans. Taking the Emperor's commission to catch the spy means playing the deadly game of spy versus counterspy. However, this is no ordinary espionage, but backed by the power of the witches of England determined to hold England's sea wards against invasion. Only an agent who is herself a medium can hope to unravel their magic in time — with the life of the man Elza loves hanging in the balance.

From the theaters of Paris to the sea cliffs that guard the Channel, from ballrooms and bedrooms to battlefields corporeal and astral, Elza must rely on her wits, her courage, her beauty, and her growing talents as a medium for she must triumph — or die!

I adore the Napoleonic period, and Graham gets all the details right, from the expert militaria to the period-perfect magic. This is not the Regency, this is Napoleon's France, and Elza Versfelt — demimondaine, actress, medium, and spy — is exactly the sort of woman to give her English contemporaries a case of the vapors. She's complex, demanding, tough as nails and entirely fascinating: an adventuress par excellence. – Melissa Scott

"Look into the mirror," Noirtier said. "Don't try to focus your eyes on it. Just let them play over the surface. Look, and dream."

I tried. We sat in silence what seemed a long time. My hands sweated, and I saw nothing but a mirror before me, Noirtier's lap and the eastward candle beyond him, the young man with glasses who had lit the flame for Asclepius. I am doing nothing, I thought.

The flames were better. I started to raise my head to tell Noirtier nothing was happening, but the reflection of the fire off the brass candlestick stopped me. It played on the brass, flickering and dancing.

You do not need this mirror, something whispered inside me. You only need the fire.

Light played on the back of my closed eyelids.

"A hanging lantern," I whispered. I could see it in the darkness, swaying with each movement of the ship. "A lantern, the kind with shutters." It swung back and forth gently over the head of the man at the desk, his dark blue coat off, white shirt and waistcoat pale in the dark. Beyond him the stern windows of the ship showed nothing but darkness, sea and night beyond. There were papers beneath his fingers, pages in neat writing, one with a row of words and numbers. I saw his face a moment as he glanced up, fair haired, young, with the broad homely face that should belong to a farmer, nothing keen and bright about him but his eyes.

"Captain Arnold," I whispered. "Captain Edmund Arnold, of the HMS Lion." Captain Arnold sat at his desk a few miles away, a cipher key in his hands. "He has a message from his spy," I said. "A new one. He just got it a few minutes ago and has gone below to decipher it."

Somewhere, far away from this cabin on Lion, I heard a rustle and a stir, some low muttered words, but they were much less real than Captain Arnold, turning numbers into words. "No…something …." I could not read much, though I could see the words plainly, as I did not read English.

A different voice, this one at my elbow. "Can you tell where Lion is?" Lannes, I thought.

"South," I whispered. "She's tacking against the wind, going down the coast, close hauled to the port bow." I did not even know the meaning of what I said, but it was there in Arnold's mind, on the very surface, where his ship was, what it was doing. A moderate wind and high seas, tacking and tacking across her course southward. Even now, above, they were passing the word to come about, Mr. Walker's voice clear and strong.

"Can you look further?" Lannes asked. "Go further out to sea? It is only a few miles to England. Dover should be visible from Lion's topmast."

It was like uncoiling, like movement swift and sure, rising up from Captain Arnold, up the length of the ship's mast, sails taut in the wind. She was tacking out to sea, her wake a zigzag down the coast. And behind her and northward, lights on the horizon, lights along the shore spread like a crescent, brighter and then dimmer as they curved westward, the southern coast of England laid out before me like a map

I stood on the wind like a gull in the night, white wings spread over Lion below. Fifty feet above her decks I hovered, watching sailors running about, the complicated and graceful business of changing her course again.

There was England. A few beats of my wings and I soared toward it, low and fast as a gull, not even leaving a shadow on the water. There was Dover, port marked by so many masts, Dover Castle above all. There was the curve of coastline, chalk cliffs glimmering white in the darkness. They were almost beneath me.

And then something rose out of the darkness, vast and strange as a great wind. It hovered, impenetrable, a shape of cloud and trouble.

I veered off, and it tore at me, gull's wings wildly beating. Time to go, I thought. This is what Lannes means by superior force. I darted, diving low, and for a moment beneath its rolling clouds I saw something different, a garden enclosed by hedges, an old woman looking up, a swan's feather in her hand.

Then the winds hit me, tumbling and shaking, buffeting at me with unearthly force. The sea came up like a wall beneath me, flat and hard and cold. I righted myself at the last second, almost beneath Lion's prow, streaking like a shadow over the waves. The winds tore at me one last time, and then it was beach and marshland beneath me, the coast south of Boulogne sleeping under a quiet moon.

I turned and looked back.

There was nothing to see, except perhaps far out to sea a shape of cloud that momentarily obscured the waxing moon.