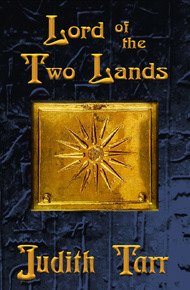 Lord of the Two Lands by Judith Tarr

But a spirit of fire has risen to blaze across the world. His name is Alexander, and he is the destined conqueror of the Persian Empire–and the king foretold of Egypt.

Meriamon, daughter of the last Pharaoh, journeys out of the Two Lands to find him and bring him home. From the battlefield of Issus to the siege of Tyre, from the founding of Alexandria to the divine revelations of Siwah, Meriamon both leads and follows her divine charge, who becomes her friend and her chosen king.

Tarr's novel of Alexander in Egypt is one of my all-time favorites. This is very much an Egyptian take on the Alexander legend, and she captures both the period and the various cultures brilliantly. Her portraits of the historical figures are sharp and true, and Meriamon is a creation compelling enough to stand equal to them. – Melissa Scott

The power was in the name. The name was power.

Beloved of Amon, son of the Sun, Great House of Egypt, Protected of Horus, Lord of the Two Lands.

Nekhtharhab. Nectanebo to the sea-peoples, the raw young Hellenes who served so well on all sides of the world's wars.

He stood on the horizon and looked down. It grew like the lotus flower, his land, kingdom and empire and heart of the world. Long slender stem of Black Land against the pitiless red of desert, great dark flowering of Delta on the edge of the Great Green that was the name and essence of the sea.

The air sighed about him, a whisper like wings, a glimmer as of falcon-eyes. Memory touched, passed: sunlight, singing, the weight of the Two Crowns new and terrible upon his brows; and names on him, new names, strong names, god-names for a god-king.

Here in Amon's temple was silence and shadows, and the basin on its four clawed feet, and Egypt in it, the rich black land of Khemet, shadow-shaped in water of the Nile. The walls were alive with painted gods and kings and queens, beasts, birds, lotus, palm, papyrus, all the many-colored splendor of Egypt. Barbarians had not touched these. Not they, not the Parsa, though they had wrought horrors enough in other temples than this of Amon in Thebes.

They were gone. He had driven them out, he and his people; and if there had been more than simple human force in it, then that was no more than the enemy deserved. Their names would die with their memory, and they would be gone for all of eternity.

Nectanebo bent over the basin. The lappets of his headdress swung forward, nearly brushing the water. He thrust them back.

One shoulder ached. A Persian mace had broken it in that last battle, just before he knew that he had won. The bone had healed well, but the ache had never wholly faded.

It was distracting him now, making the image waver, the power drain away. He drew a sharp breath, and the image steadied. It did not change. Persia was coming—not soon, perhaps; not for years, it might be—but inevitable, and inescapable.

There was no power in Pharaoh, even in a pharaoh who was a great mage and master of the hidden art, to overcome an enemy so implacable. Their gods were young and few and eager for empire. His were old beyond telling and numerous beyond counting, and they had never willingly been gods of war.

"I can hold," he said, soft in the silence, "with the gods' help. But my body will die, and I become Osiris; and who will be Horus to defend my lands? I had a son. He is dead; the Parsa killed him. I have a wife. She is with child; and if it is a son, will his strength suffice for what I foresee? Who will defend my kingdom? Who will wrest it from the Persian's fist?"

Nectanebo breathed a word. The lamps ceased their swaying. The walls stilled. Something chittered away overhead. Bat; or spirit blown from its course and fluttering lost among the pillars. Nectanebo took no notice of it.

The water blurred and rippled. A new vision grew in it.

Almost, he laughed. He had asked the gods, and they answered, from the very beginning.

Lamplight limned it, granted it more shadow than light, but there was no mistaking the name of that dance. The man was as eager as a ram, and built like one, a heavy gleaming creature with muscles that rolled like water. The woman was nigh as tall as he, but if he was a ram, she was a tigress, turning suddenly in his clasp, locking legs about his middle and raking claws down his back.

He grunted. She laughed, arched, sank teeth into his shoulder. Her face through streams of red-gold hair was wild, a little mad.

Her teeth had drawn blood. He took no notice of it, though it ran in the lamplight in streams the color of wine, or of the Tyrians' purple. Their shadows leaped and danced, a mingled shape of dark and light upon the wall. For a stretching moment it was a ram, a ram crowned with the sun, and a serpent coiled about him, locked in passion that was half war.

It broke, blurred, scattered. They dropped down in a tangle of limbs and bodies and coppery hair.

There was a silence. Nectanebo, trapped in the scrying, watched the wildness flow out of them. The man laid his head on the woman's breast. His hair was black and thick, cut as the Hellenes cut it, and he wore a beard like a Hellene, and that was a Hellene's face, though ram-heavy, ram-strong. She was slighter as befit a woman, but her beauty was as Greek as his, the full rounding of her body even in its slimness, the strong oval face and the long broad nose and the wide low brow: to an Egyptian, heavy and somewhat coarse, but striking for all of that. Her hands were long and strong, stroking the knotted muscles of his back, smoothing them one by one.

"A god was in us tonight," she said. Greek indeed, but not as it was spoken by envoys in the courts of the Two Lands: broader and softer, with the hint of an antique lilt.

"Not one of your damned snakes again?" His voice was deep, with the hint of a growl.

She laughed in her throat. "Not tonight, my jealous lord. Didn't you feel it? Didn't you see the light that was on us?"

"My lord." It was a purr. "My king. Were you Herakles tonight? Or were you more? Were you even—"

His hand stopped the name. His scowl was terrible. "I was myself. Or am I not enough for you?"

Over the heavy black-furred hand, her eyes danced with mirth. A gasp escaped him. His hand snapped free. She bared her sharp white teeth. "See, my lord, I prophesy. We've made a king tonight, you and I and—who knows? A god may pass where he will. I for one shall welcome him."

"Raving madwoman." His body was reviving. He rose above her. "We'll see if I need a god to do my rutting for me."

She smiled long and slow, and pulled him down.

Nectanebo straightened slowly. There was his answer. There, if he read it rightly, was his king: a spark in the womb of this woman, this wild barbarian creature who could not but be a queen. Her king was man enough, and strong enough, but Nectanebo was a mage, and he knew that this man was not what he was seeking.

Barbarians. Aliens. Foreigners. Had he wrested his lands from the Parsa, only to surrender them to the Hellenes?

He rose to his full height. He was aware as he had not been in a long while, that even in Khemet he was not tall; that in the world without, he was a small man. A little thin brown man with a scarred and stiffened shoulder, a suggestion of Ethiopia in the fullness of his lips and the broadness of his nose, but all Egypt in the long dark eyes made longer still with kohl. He was greater than he looked, and stronger. He was Lord of the Great House, master of the Two Lands. He had conquered the Parsa and freed his people, and restored the worship of his gods.

He did not kneel as even Pharaoh should before divinity. The mood was not on him. The power was in him still, though it had begun to ebb. "Why?" he demanded of the air.

It whispered, but it spoke no word that he could understand.

He stooped toward the chair that sat by the basin, caught up what lay there: the crook and flail of the Great House. He held them high. "Am I the last, then? Is the Great House to fall? Shall no man again be Lord of the Two Lands, but that he be the king of an alien people?"

He sank down. The floor was stone, and cold under the thin linen of his kilt. Crook and flail drooped on his knees. "At least," he whispered, barely to be heard, "at least, if ever you have loved me, let me know his name."

The stillness deepened. His shoulders sagged. The gods had forsaken him. Even his power was gone, drained away like water from a broken pot. He was mere man, and mortal, and deaf to aught that the heart could hear.

It was a whisper, fainter even than his own. It could have been the slap of bare feet on stone, the rustle of linen in a priest's robe, the hiss of a cat as it warred with shadows.

Every muscle stretched taut. He strained to hear.

Yes. Yes, he had heard it. A name—alien name for an alien king, but his king, his god, his hope.