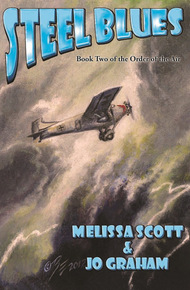 It's 1931, and the Great Depression is biting hard. The team at Gilchrist Aviation gambles that they can win the money the need to keep the business running by placing first in a coast-to-coast air race, but before the first leg is finished, they're forced to deal with a stolen necklace, a runaway Russian countess who hears the dead, and a centuries-old curse. If that wasn't bad enough, the closer they get to New Orleans, the more they find out about the unsolved murders of the notorious Axeman — and what if the murderer is one of them?

The depths of the Great Depression produced any number of desperate schemes to provide entertainment baited with the chance of prize money: dance marathons, flagpole-sitting, and, yes, even a cross-country air race. Jo Graham and I drew on this and the Lodge-based magic you can find in period texts to plot this adventure for the WWI veterans who make up the crew of Gilchrist Aviation — all of whom will be tested in unexpected ways. – Melissa Scott

An hour into the desert, and Lewis was beginning to think they'd made a bad mistake. They were still burning fuel at a faster rate than they should be, and as the tanks emptied, he was beginning to feel drag in the tail. Alma bent over her clipboard again, came up frowning.

"I can't cut back the mixture any further," Lewis said. "And we're tail-heavy all of a sudden."

"Maybe one of the suitcases slid," Alma said, unfastening herself from her seat. "I'll tell Mitch to take a look."

"Thanks," Lewis said. They were no longer flying into the bright sun of morning, a relief to the eyes, but the Mojave stretched pale and empty beneath his wing, broken only by darker ridges of rock. Ugly country, too barren even for the Indians. He glanced at the fuel gauge again, willing its motion to slow.

The cockpit door opened, and Alma slid back into her place. "Mitch is checking —"

There was a crash and a thumping from the cabin, enough to unbalance the Terrier for a moment. Lewis steadied it, casting one wild glance over his shoulder. Alma was already out of her seat again when Jerry flung the cockpit door open."We have a goddamned stowaway," he announced.

"What?" Alma's voice scaled up.

"That soi-disant countess," Jerry said. "She was in the baggage compartment.""All the way?" Alma grimaced, knowing it was a stupid question.

Alma closed her eyes. "We did."

Lewis took a deep breath. That was why they were burning more fuel than expected, that was why everything was just that little bit off. They were carrying more weight than they'd thought, and so the numbers didn't add up. Couldn't add up.

"We could dump her," Jerry said.

"No." Alma shook her head. "Get back there, find out what she wants —""Oh, my God," Jerry said. "She stole Henry's necklace. What do you want to bet she was hiding it on the plane when I found her? Though why she stowed away —""I don't really care," Alma said. "Just make sure she can't do any more harm. I need to figure out if we're going to have enough fuel to make Flagstaff."

Jerry backed out, closing the door behind him. Lewis looked at the fuel gauge again, and then made himself look away. "We'll be cutting it close."

"If we can make it at all," Alma said, and bent over her clipboard again.