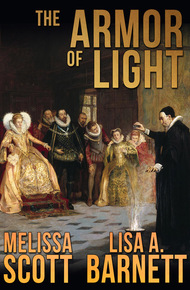 Melissa Scott was born and raised in Little Rock, Arkansas, and studied history at Harvard College. She earned her PhD from Brandeis University in the comparative history program with a dissertation titled "The Victory of the Ancients: Tactics, Technology, and the Use of Classical Precedent." Over the next thirty years, she published more than thirty original novels and a handful of short stories, most with queer themes and characters, as well as authorized tie-in novels for Star Trek: DS9, Star Trek: Voyager, Stargate SG-1, Stargate Atlantis, and Star Wars Rebels.

She won the John W. Campbell Award for Best New Writer in 1986, and won Lambda Literary Awards for Trouble and Her Friends, Shadow Man, Point of Dreams, (with long-time partner and collaborator, the late Lisa A. Barnett), and Death By Silver, written with Amy Griswold. She has also been shortlisted for the Tiptree Award. She won Spectrum Awards for Death By Silver, Fairs' Point, Shadow Man and for the short story "The Rocky Side of the Sky." Her most recent short story, "Sirens," appears in Athena Andreadis' anthology Retellings of the Inland Sea..

Lately, she has collaborated with Jo Graham on the Order of the Air, a series of occult adventure novels set in the 1930s (Lost Things, Steel Blues, Silver Bullet, Wind Raker, and Oath Bound) and with Amy Griswold on a pair of gay Victorian fantasies with murder, Death By Silver and A Death at the Dionysus Club. She has also continued the acclaimed Points series, fantasy mysteries set in the imaginary city of Astreiant, most recently with Point of Sighs. Her latest solo novel, Finders, was published at the end of 2018, and she is currently at work on the next book in the sequence, Fallen.

The Armor of Light by Melissa Scott and Lisa A. Barnett

The heavy summer air of 1595 is full of portents for Elizabeth, England's Queen, and James VI, King of Scotland. A coven of witches secretly controlled by the Wizard Earl of Bothwell has summoned a storm to sink the ship that bears James' bride to Scotland. Though the ship made port, the success of their summoning has emboldened them; the coven is now launching wizardly attacks on the King himself — and James is terrified.

But this is not quite the England that we know. The Queen's champion Sir Philip Sidney did not die at Zutphen, nor was poet and spy Christopher Marlowe murdered in a Deptford tavern, and both are powerful magicians, if in different traditions. The Queen must send them north to break the prophecy and save the King of Scots — and England's future.

Almost thirty years ago, Lisa Barnett and I each had an idea for an Elizabethan fantasy, and neither one of us would cede the topic to the other. Instead, we combined the two stories, and came up with a better idea than either one of us had had alone: an alternate history, in which neither Sir Philip Sidney nor Christopher Marlowe died as they did in our world, and in which magic works exactly as the Elizabethans believed it did. I'm still really proud of this one. – Melissa Scott

The trivial prophecy, which I heard when I was a child and Queen Elizabeth was in the flower of her years, was When hempe is sponne
England's donne:
whereby it was generally conceived that after the princes had reigned which had the principial letters of that word hempe (which were Henry, Edward, Mary, Philip, and Elizabeth) England should come to utter confusion....
Francis Bacon, Of Prophecies

She had put away mirrors some years before, preferring to see herself reflected in the words of the young men who still thronged her court. Even now, she paused in the doorway, giving the two old men who waited for her time to see and admire and frame their compliments. The cool morning light that streamed through the diamond-paned windows would not flatter, and a part of her knew it and rejected it, even as she sailed forward to accept their homage.

"Spirit," she said, with real fondness, and one old man—he was seventy-five this spring, had seen three quarters of a century—bowed stiffly back. He was bundled in his robes of office, fur-lined gown pulled close about his throat beneath the narrow ruff, long jerkin buttoned close, the flaps of his wool coif pulled over his ears even in springtime. The woman, resplendent in white figured satin that showed a vast expanse of white-powdered bosom, rejoiced that she had not succumbed to that frailty of old age. "Dr. Dee." Despite herself, her voice sharpened on the name, as she stared at the second old man in his scholar's black. There was something of the crow about him, something of the ravens that haunted the Tower, despite his protestations that he used only white magic, and never more so than today. Perhaps he sensed her unease, for his bow was very deep, and he blinked weak eyes nervously at her as he straightened.

"Your Majesty." It was Burleigh who spoke first, secure in his monarch's favor—the only man now living who could make that boast. "I am very grateful that your grace has agreed to this interview."

That was more of a barb than most men were allowed, considering how strenuously the queen had resisted seeing her court wizard of late. Elizabeth's thin lips tightened further, wrinkles showing momentarily in the thick paint, and then she had smoothed her expression, seating herself carefully in her chair of state. The immense white skirt, sewn with silver and pearls and scattered with blood-red roses, pooled around her ankles, hiding her embroidered slippers; she rested her beautiful long hands on the arms of the chair, displaying them in a pose so practiced it had become natural. The rising sun shone through the upper coils of her immense red wig, glinted from the crown set precariously atop that pearl-strewn edifice. Her face, as she had intended, was in shadow.

"Well, Doctor Dee," she said, and heard herself sharp and shrewish, "what news have you brought me?" The old scholar—he was only six years older than she, though she chose to forget it—blinked rheumy eyes at her again, and she frowned. "Does the daylight trouble you, master wizard? We will have the shutters closed."

Burleigh frowned, the thickets of his eyebrows drawing down toward his beard. Dee said, stammering slightly, "I beg your Majesty's pardon. It's not the light but your Majesty's presence that dazzles me."

"We could withdraw that as well," Elizabeth said, but her expression softened slightly. It was a feeble compliment, and delivered without courtly graces, but, she thought, sincere enough. She leaned back in the high chair, easing bones that woke tired now after a night's dancing. "Come, sir, my dear Spirit says your news is both urgent and alarming. Let's hear it—it may not be so fearsome in the sunlight."

The wizard bowed again, and thrust his gnarled hands into the furred sleeves of his gown to hide their shaking. The room was chill, one of the long windows opened to let in the cool spring air, but it was not only the cold that made him tremble. "As your Majesty—and his lordship—know," he began, "at the new year I cast your Majesty's horoscope for England, and share those tidings with your Majesty alone."

The queen's eyes slid toward Burleigh, and were answered by an infinitesimal nod: a royal horoscope was more than a matter for private concern; could become, in the wrong hands, a matter of state. Dee was well guarded while he served the queen, in part to protect him from the mob who feared him and had once burned his library, but those guards were also there to assure that no state secrets, however obtained, made their way into the hands of Elizabeth's enemies. If Dee saw the movements, he gave no sign of it, but continued in his soft, stammering voice, "At this new year, as my lord Burleigh has doubtless told you, the heavens were troubled, the portents strange, and I could read no certainty of anything in stars or glass. In such a case, the best remedy is delay, and I did delay, until the—storm—seemed past." He glanced up, anxiously, but could read nothing in the queen's shadowed face. Burleigh stroked his beard, weighing every word.

Dee bowed his head again. "Then, at your Majesty's express command, I cast the horoscope. The portents were —well, ominous, your Majesty."

There was a long silence, and then Elizabeth said, "Ominous, Doctor Dee? Could you perhaps be more specific in your terms?"

Recognizing the tone, Dee gave Burleigh a swift glance of appeal. The secretary of state said, slowly, "Yes, your Majesty. The signs concern what will befall England after your death."