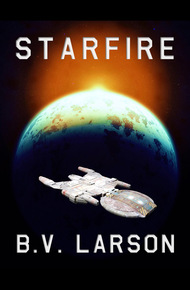 B. V. Larson is the author of more than fifty books with over two million copies sold. His fiction regularly tops the bestseller charts. He writes in several genres, but most of his work is Science Fiction. Many of his titles have been professionally produced as audiobooks and print as well as ebook form. Eight of them have been translated into other languages and distributed by major publishers in foreign countries. He writes college textbooks in addition to fiction, and his three-book series on computer science is currently in its sixth edition.

Starfire by B. V. Larson

Two ships launch, but only one can come home with the prize—and no one suspects what they'll find when they get out there.

On June 30, 1908 an object fell from the sky releasing more energy than a thousand Hiroshima bombs. A Siberian forest was flattened, but the strike left no significant crater. The anomaly came to be known as the Tunguska Event, and scientists have never agreed whether it was the largest meteor strike in recorded history—or something else.

Alien Artifacts have been uncovered since the 1908 event, and a new star drive is discovered. When another, larger Artifact is detected orbiting Jupiter, both NASA and the Russian Federal Space Agency are determined to beat all rivals to the next treasure trove of alien tech.

The huge following of BV Larson's work really comes as no surprise once you've picked up one of his books. They're fast paced, with immediate engagement, and scribed in a way that turns the pages like no other. STARFIRE draws on a large ensemble cast to tell a story of intrigue and espionage. People are being murdered, and scientists are being secreted away, all because an alien artifact looms just beyond humanity's reach. – Martin Kee

Lev's eyes rolled up, and he stared through the only triangular window he could see. Vapors roiled outside. Troika was venting something.

The ship shook with uneven acceleration and rolled over, aiming its belly toward the alien world outside.

The shaking increased as the ship thrust hard to slow itself. Lev gripped the armrests of his chair.

Lev's teeth were showing now. He knew that, but he couldn't help it. His heart pounded and sweat crawled in his hair like insects.

Something touched his arm. It was Kira, reaching out to him. He twisted against his harness, and they looked at one another, their eyes only barely able to meet due to the curvature of their closed helmets.

He clasped Kira's hand. She relaxed and lay back. He did the same.

The ship heaved and a crashing roar struck them. Lev knew then, truly knew, that he was dead.

Kira gripped his hand with fingers like iron bands, and she didn't let go.