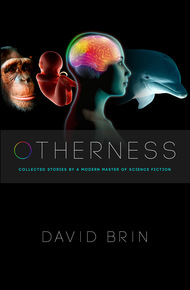 David Brin is a scientist, inventor, and New York Times bestselling author. With books translated into 25 languages, he has won multiple Hugo, Nebula, and other awards. A film directed by Kevin Costner was based on David's novel The Postman. David's science-fictional Uplift Saga explores genetic engineering of higher animals, like dolphins, to speak and join us exploring the stars. His latest novel is Existence, an unusual, near future exploration of First Contact.

As a scientist/futurist, David is seen frequently on television shows such as The ArchiTechs, Universe, and Life After People — with appearances on PBS, BBC and NPR. Brin is in-demand to speak about future trends, keynoting for IBM, Google, Microsoft, Qualcomm, as well as Homeland Security, the CIA and the Electronic Frontier Foundation. His nonfiction book The Transparent Society explores the dangers of secrecy and loss of privacy in our modern world. It garnered the prestigious Freedom of Speech Prize from the American Library Association.

From Hugo and Nebula winning author David Brin comes this extraordinary collection of tales and essays about the near and distant future, as humans and other intelligences encounter the secrets of the cosmos - and of their own existence. Otherness won the Locus Award for Best Short Story Collection of 1995.

In The Giving Plague, a virus, transmitted by blood donation, begins to change humanity. In Dr. Pak's Preschool, a woman discovers that her baby has been called to work while still in the womb. In Natulife, a married couple finds their relationship threatened by the wonders of virtual reality. In Sshhh... the arrival of benevolent aliens on Earth leads to frenzied madness as humans rush to conceal their secret 'talent.' In Bubbles, a sentient starcraft reaches the limits of the universe - and dares to go beyond. What happens when an urban archaeologist discovers a terrible secret under the landfills of Los Angeles? Find out in Detritus Affected. Will there still be a purpose for "biologicals" when cybernetic humans become mighty and smart?

When I first read OTHERNESS I was still in college. I later read the UPLIFT series, and decided at some point I wanted to become a writer myself. Brin's work has inspired movies, TV, and hundreds of other authors. The stories in OTHERNESS are as relevant today as they were then, and I still find myself haunted and inspired by Brin's work years later. – Martin Kee

My thoughts drift often to the countless generations who preceded our faintly-hopeful new era. Most of those ancestors, after scratching all day for survival, spent their evenings staring at the fire. Perhaps bantering or gossiping, at first. But then, surely, calling for a story.

Think of it. Year after decade after lifespan after century after millennium — so many stories! Written-illuminated in sparks and smoke and flickering gouts of flame… but also in the minds of children and adults who could stretch out, for just a little while, and imagine that there's more than this.

Somehow, those hardy survivors, amid their daily struggles, grief and pain, must have drawn some advantage, some strength, from the storyteller's craft. Because all known human tribes and nations inherited the gift.

Today our own version of firelight pours from billions of bright screens. It still rises — alive — from the black squiggles that scroll across both paper and electronic books. We can slake our hunger for adventure as easily as we satisfy a craving from the fridge. The issue is no longer quantity, but quality. Variety. And so, as standards rise, we demand ever more from stories.

For many decades, science fiction was the last great refuge of English language short fiction, thanks to the golden-era magazines that offered paying markets where authors - both new and veteran - could hone craft, while testing new ideas. Although novels (and films) are how you make a living at fiction, while exploring concepts and characters in great depth, it is the tighter, disciplined lengths that truly teach you efficiency, packing power into every word or phrase.

Even the goal is different. Novels are like movies, in that the customer expects a "third act" containing some plot resolution, good or bad, tragic or triumphant. But great short tales often skip that climactic arc; they leave the reader hanging, with any resolution more implied than spelled out. Like episodes of The Twilight Zone, a short story aims for a sort-of ringing tone in the air, leaving the recipient breathless, speechless, with unresolved tensions, yet satisfied.

I don't claim any of that for the tales you are about to read in Otherness! But it's what made me happy about the short works of those who inspired me — Robert Sheckley, Alice Sheldon, Ray Bradbury, Clifford Simak… and Poul Anderson, the most natural storyteller I ever knew.

Poul's realm was the tale of medium length, the novella, which happens to require about the same time to read as an old-era tribal bard might have taken to spin an evening's epic… which is one reason I would sometimes envision Poul in animal skins, waving his arms through the smoke. It made me smile — and still does.

Otherness has a theme. A loose one, but persistent. (And I think it holds up, in this new edition.) That familiar things may become strange and we may have to adapt to others who will rock our pat assumptions. A theme that carries across my life, both as an author and as an astronomer… and certainly as a parent! This carries into the essays I included in the volume, which poke at some assumptions that (perhaps) you have long found comforting.

We have the first civilization in which toppling assumptions gets you paid, instead of burnt at the stake! (Though there are people in this world who likely would consign me to the latter fate.) Indeed, there is nothing you can do that is more loyal to the Great Global Enlightenment Experiment than to poke, to question, to provide the criticism we can all learn-from — and your willingness to learn from the critiques of others.

It is a good sign, if you can say to yourself: "any other era would have burned me. I will teach myself to appreciate some of those whom I might have burned."

But above all, explore!