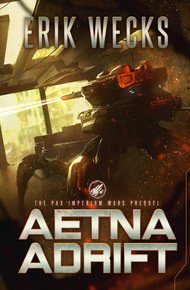 Erik Wecks is a proud husband, father, and writer living in Vancouver, Washington. By day, you will find him running kids, doing laundry, and making dinner. By night, you can often find Erik writing in a coffee shop while my kids are at piano, youth group, or even drivers ed.

In the fall of 2011, Erik wrote the number one non-fiction Amazon bestseller How to Manage Your Money When You Don't Have Any. This book of basic financial advice has served over 80,000 families. However, most of his efforts now go into creating fiction. Erik loves space science and believes in a future in which humanity greens up the galaxy. His Pax Imperium universe blends political intrigue, emotional characters, and a dose of breathless tension to create face-paced great reads.

What do you do when every aspect of life is regulated by a soul-sucking bureaucracy and constant surveillance is the norm?

You run. You find the out-of-the-way places no one watches. You make sure no one depends upon you, and you beat the system. That's what Jack did, and it worked...until now.

It starts to go wrong when Jack breaks his rule and takes Anna home more than once. Then, Administrator Timothy Randall arrives and turns Jack's backwater moon upside down. On a mission from the central government which no one understands, Randall and his staff do whatever it takes to accomplish their goals. When the killing starts, Jack finds himself blackmailed, tortured, and enslaved to a ruthless political faction. Now he must figure out who to trust, how to escape, and decide between Anna and his freedom.

Wecks' books are instantly accessible, and AETNA ADRIFT is no exception with its space noir setting. It hits the ground running as we follow Jack Halloway living the life he knows best. Smuggler. Black marketer. Womanizer. But new management moves into Aetna, management that is exactly the sort of thing Jack has spent his life avoiding out here on a distant colony. – Martin Kee

By her own calculations, Human Resources Director Carla Savage had been the sixth most powerful woman in Unity Corporation Space, until yesterday. Yesterday had been an unmitigated disaster for her boss, Vice President and former Board Member Timothy Randal. In the patronage system of the board room, his disaster became her own.

Perspiration dampened the well-fitted, white dress shirt she wore with her regulation uniform. There would be a cost to pay for such a downfall. She was acutely aware of Randal's head of security, Colonel Gunderson. The blow will come from him, she thought.

The Colonel had placed himself in the chair between she and Ben McDonald, Randal's head of logistics and procurement. Together, the three of them made up the inner circle of Timothy Randal's staff.

It could be both of us.

Their boss stood looking out of the Longworth office building in Washington D.C. Timothy Randall had just accepted a promotion from CEO Cowhill–an advancement to executive vice president–and a posting to the directorship of a broken down, middle of nowhere, pimple of a moon named Aetna.

A Unity faction downfall this complete hadn't come in the board room since The Catastrophe, and that was nearly seventy years prior.

Hands clasped behind his back, Randall stood facing the last DC winter he was likely to see in his lifetime. Clouds drawn low by the promise of heavy snow lay over the dome that once housed The World Congress and before it the United States Congress. The building was over twelve hundred years old.

The man turned, jaw set as always, eyes undimmed. Randall never seemed ruffled. It was one of the things that, until yesterday, had attracted Carla to his faction. Now it seemed like hubris.

Randal looked at Gunderson and made just the slightest flick of his hand.

Carla panicked. The muscular man stepped behind MacDonald and broke his neck in one swift motion.

Carla flinched in her seat at the disturbingly loud crunching sound that accompanied the pitiless act. She couldn't help but watch. As the dying man's air left him, his eyes wandered and met her own. He knew. Carla had no doubt–he knew who it was who had betrayed him.

Timothy Randall was a competent lover, intent on satisfying the needs of his partner and himself. He was efficient, as he was in all things, but businesslike and distant. She had only been with Gunderson once–never again. On the other hand, Ben had loved her–had loved her and told her things he ought not have said, things she found advantageous.

Timothy Randall breathed out slowly, letting the tension dissolve from the room. "Well, that's taken care of." He waved to the two security personnel waiting in the wings. They stepped forward and quickly removed MacDonald's body from the chair and drug it away.

Still standing behind his desk, Timothy Randall faced his two remaining staff members. He turned to his human resources officer. "Excellent work, Carla. MacDonald's indiscretion has opened up an opportunity for us that I could not have foreseen. With him feeding our most sensitive conversations directly to Cowhill, we have been able to put a plan into action that would have taken years of careful arrangement else wise."

Carla's mind started to race. "I'm sorry? I must have missed something."

Randal smiled, his tone warm and fatherly, "When I was a little boy, Carla, I attended the last remaining Catholic school in New York–a wretched and foolish place, mind you–but I remember the priest. Father Zabek was his name. He used to say the way up is down and in this, he was apparently right. We're going down to come back up later."

Randal paused for effect before continuing. "The military needs my help with a project that even Cowhill doesn't know anything about. It was Admiral O'neill who suggested my appointment to Aetna as a means of rubbing salt in the wound of my removal from the board. Cowhill has no clue. The military needs an onsite administrator to make sure that little Aetna is ready when they need it. So we're going on a country vacation. My only concern is that without MacDonald on the procurement side of things, we're playing a man down, and a very important man at that. Procurement is going to be essential in the hinterlands. Were you able to find someone who might fit the bill, Carla?"

Feeling pleased to surprise him, Carla berated herself. None of that school girl bullshit, she thought.

"Actually, yes." She handed over the single sheet of electronic paper.

As he flipped through the pages of the report, a small grin creased the corner of his mouth. "Well, that is unexpected. Really? All this out there, at Aetna?"

Carla nodded. "As far as we can tell, it's the largest non-syndicated black market in the Unity, and when you think about it, it really does make sense, sir."

"On Aetna, no one is watching."

Randall nodded thoughtfully and handed the paper to Gunderson. "Well Andy, why don't you see what you can dig up on Jack Halloway. Before we meet, I want to know everything."