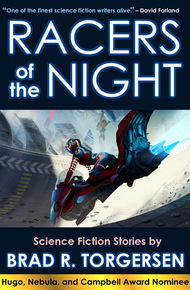 Racers of the Night by Brad R. Torgersen

Flying at the Speed of Night . . . Following in the successful footsteps of his previous short fiction collection ("Lights in the Deep") award-winning and award-nominated Science Fiction author Brad R. Torgersen is back with twelve new tales. From the edges of explored space, to the depths of the artificial soul. At once breaking the limits of human endurance, while also treading the tender landscapes of the human heart. Originally appearing in the pages of Analog magazine, Orson Scott Card's InterGalactic Medicine Show magazine, Mike Resnick's Galaxy's Edge magazine, and elsewhere, these stories are collected here for the first time; with commentary and anecdotes from the author. Introductions by bestsellers L.E. Modesitt, Jr., Kevin J. Anderson, and Dave Wolverton (Farland.)

While firmly planted in speculative fiction, the stories in this anthology deal with very human concepts of freedom, consciousness, superstition, and morality. Torgersen's range is phenomenal, able to put himself and the reader into other minds and scenarios with perfect clarity and adept storytelling. All these descriptions don't really do Brad justice, however. His short stories have been widely published and rightfully so. They display a masterful vision and skill that is all too rare in popular fiction these days. – Martin Kee

The Curse of Sally Tincakes

She was brunette, with dark eyes, 100 meters high, and stacked like a pin-up model. The red thermal paint of her bikini had begun to flake after decades spent broiling in the lunar sunlight, but her smile never wavered. Both arms stretched above her head into the black sky. The empty first-stage of an ancient Tokawa moon booster rocket sat balanced across her palms. The cylinder of the booster was parallel to the roughly-graded regolith at the statue's base, where the statue's silvered platform heels sent anchor spikes deep into the lunar basalt below the surface. Across the cylinder the words CAZETTI RACEWAY were emblazoned in massive, royal blue lettering.

Jane Jeffords grinned at the sight.

It had taken years of effort to make it to the top.

Though her eager mood was not shared by her driver.

"What's wrong?" Jane asked Bill. The old man was frowning as he slowly navigated their suborbital moon car over the lumpy, gray infield—patiently waiting for traffic control to clear them for landing. A cloud of other cars, all belonging to competitors, had begun to swarm in the airless space above the track.

"You racing here is a bad idea," Bill said. "Sally Tincakes is watching."

"The giant broad down there. Sally Tincakes. That's what we used to call her, two generations ago; when I was still a racer."

Bill's liver-spotted hands smoothly worked the car's controls as he talked. Age had taken his hair and his looks, but not his surety with machines. The car moved with precision.

"How in the heck did you come up with that ridiculous name?"

"The real Sally—Mrs. Frank Cazetti—was the darling of the racing circuit when I was your age. Her billionaire husband made a show of her everywhere he went. Liked to rub it in other guys' faces—how hot she was."

"To the point of making a huge effigy?" Jane said, eyebrow raised.

"That was strictly for publicity," Bill said.

"Why not just put up an LCD billboard?"

"Any idiot can stare at a screen. Sally down there was an experiment in throwback marketing. Something special. From a time when there just weren't that many women on the moon."

Jane felt her stomach shift as the car suddenly dropped, the lunar gravity tugging them gently towards the ground. The race track itself was a wide, shallow, concave half-pipe. It formed an irregular pattern of long straightaways, occasionally punctuated by a series of wicked-looking twists—like an outsized Earth bobsled course. On steroids.

Jane imagined herself hurtling along the route. Goose bumps momentarily formed. This was it. This was the big time. Cazetti was the toughest track on the lunar racing circuit. If a lady wanted to make a name for herself, this was the place to do it. The most publicity—and the sweetest purse, too.

The mere thought of it was like rocket fuel in Jane's veins.

She'd come a long way from her delinquent years as a foster kid, bouncing from settlement to settlement in the asteroids. She could still hear her last foster mother screaming at her, as Jane's few belongings were thrown out the door of the crummy family module on Ceres: no wonder your real parents never came back for you, you'll never amount to anything, do you hear me? Nothing!

If old Bill noticed her momentary reverie, he didn't show it. His eyes were fixed on the instruments—fingers making subtle attitude adjustments, and their car falling towards its assigned parking spot. Jane could make out the domed bleachers that ran along the inside of the track, and the various pit assemblies which lay just inside the bleachers.

One of these pit assemblies had an empty stall that beckoned with flashing yellow lights.

Bill guided them in by instinct more than sight—Jane barely felt it when the landing struts finally touched down.

Even though he was ancient, Jane had to admit, Bill still had the right touch. She just hoped that, as crew boss, he'd be the man to help her take the Armstrong Cup. She'd spent a lot of money bringing him out of retirement—at the grudging suggestion of her old crew boss Mike Lomba, who'd quit the circuit and gone back to Earth.

Bill reluctantly took off his headset and pressed the button for the revolving dome lid, which began sliding up from one side of the parking stall.

"You think that'll make a difference?" he said.

"I spent almost as much money on that bike as I did on you. It better be money well-spent."

Bill stared at her, and a shuddering in the car's frame told them the stall was being pressurized.

"First rule I always tell my drivers, it 'aint the crate, it's the ass sitting in the crate that matters most."

"You come up with that one yourself?"

"Unless it helps me win, it's a waste of my time."

Bill sighed, never taking his eyes off her.

"Mike told me you were the most single-minded, ferociously competitive driver he ever worked with. That you don't back down and you don't take no for an answer."

"Would it matter to you if I told you the real reason Mike quit?"

"He said his mother was ill and he had to go home."

Now it was Jane who stared.

"Mike didn't have the heart to see you come here and get killed."

"What the hell is that supposed to mean?" Jane said, voice raised.

"You really don't read your history, do you?"

"I heard what you said," Bill snapped, cutting her off. "Everything you've done up to this point—every track you've ever won on—was practice. Cazetti is the real deal. Time for you to finish your edumacation."