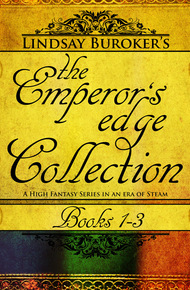 Fantasy and science-fiction author Lindsay Buroker has early memories of convincing childhood friends, pets, and stuffed animals to play the roles of characters in her worlds, so it's safe to say she's been making up stories for a long time.

She self-published her first novel, The Emperor's Edge, in December of 2010 and has written and published more than 60 novels since then, most under her own name, but a few steamier ones under a pen name. By mid-2012, she was doing well enough to quit the day job and become a full-time author.

She grew up in the Seattle area but has itchy feet and has moved several times and also served for four years in the army. She recently moved from Arizona to Bend, Oregon, where she and her dogs now have eighty acres to roam around on. Someday, she'll even have a house on that land!

The Heritage of Power series is a spinoff of her USA Today best-selling Dragon Blood series but introduces new heroes and can be picked up by new readers.

For those who enjoy adventure, fantasy, steampunk, and heroes who are just as likely to battle with words as with swords, the first three Emperor's Edge novels are now available in one collection.

Follow enforcer-turned-outlaw Amaranthe Lokdon, the infamous assassin Sicarius, and their team of aspiring heroes as they attempt to clear their names by thwarting evils aimed at the young emperor.

Lindsay Buroker's name is well known in the indie author community, where her exceptional writing and addictive storytelling has earned her a large and enthusiastic following. When I heard my mother raving about the latest series of books she'd become hooked on and I realized she was talking about Emperor's Edge, I knew this character-driven adventure would be a great addition to the bundle.

Amaranthe woke in the middle of the night with her heart slamming against her ribs. Fleeting memories of a nightmare dissipated like plumes of smoke from a steam engine. All she remembered was something dark chasing her, emitting a horrible, unearthly screech.

The sound came again. She frowned with confusion as dream and reality mixed. Had the screech been real or was she still sleeping?

She sat up on the cot. The wool blanket pooled around her waist. Darkness blanketed the room, though she could feel heat radiating from the nearby stove. She sat motionless and listened.

At first, she heard nothing. Deep in the industrial district, the icehouse neighborhood saw little traffic at night, and silence stretched through the streets like death. Then another screech shattered the quiet. Amaranthe cringed involuntarily; it jarred her nerves like metal gouging metal. An eerily supernatural quality promised it was nothing so innocuous. And it originated nearby, within a block or two.

Thinking of the bear-mauling story in the paper, Amaranthe slid off the cot, reluctant to make any noise. She managed to thump her knee against the desk. So much for not making noise. She groped for the lantern and turned up the flame. The light revealed her neat pile of boots, business clothing, knife, and the box containing her savings. She tugged on the footwear, then grabbed the weapon and lantern. When she opened the door, it creaked. Loudly. She hissed at it in frustration.

On the landing, she glanced around, hoping Sicarius would step out of the shadows. The vastness of the dark warehouse mocked her tiny light. The floor was not visible from the landing. When Amaranthe leaned over the railing, her light reflected off exposed ice, mimicking dozens of yellow eyes staring at her.

Another inhuman screech cut through the walls of the icehouse. It echoed through the streets and alleys outside, surrounding and encompassing. In the distance, dogs barked. The hair on her arms leapt to attention. She shivered and clenched the handle of the lantern more tightly.

“Help!” came a male voice from outside. “Anyone!”

The nearby cry startled Amaranthe. It sounded like the speaker was directly in front of the icehouse.

She crossed the landing, her boots ringing on the metal. A pounding erupted at the double doors below.

“Is someone there?” the voice called.

“On my way!” Amaranthe hustled down the stairs.

He had to be trying to escape whatever was hunting the streets. The doors rattled on their hinges.

Amaranthe took the last stairs three at a time. She slid on sawdust when she landed at the bottom, recovered, and ran to the doors. She reached for the heavy wooden bar securing them.

A deafening screech sounded right outside. Amaranthe jerked back.

On the other side of the door, the man shrieked with pain. She wanted to help, to lift the bar, but fear stilled her hand. Armed only with a knife, what could she do?

Coward, you have to try.

She yanked her knife from its sheath. Outside, the cries broke off with a crunch. She reached for the bar again.

She froze at the authoritative tone of Sicarius’s voice.

“Someone’s dying out there,” she said, more out of a sense of obligation than a genuine desire to open the door.

Sicarius walked out of the darkness beneath the stairs. If he had been sleeping, it was not evident. He was fully dressed and armed.

Amaranthe forced her breathing to slow and listened for activity. She had a feeling Sicarius was right.

Footsteps crunched on the snow outside, but they did not sound human. They were too heavy. The crunching stopped, and snuffling replaced it. The door shuddered as something bumped it. Amaranthe backed away. The snuffling came again, louder and more insistent.

She continued backing up until she stood beside Sicarius.

“Are we safe in here?” she whispered.

“Oh.” Better to know now than later, I suppose.

Amaranthe searched for escape routes. If she ran up the stairs and climbed onto the railing, she might be able to pull herself up into the rafters. From there, she could crawl along the network of steel beams and supports to the high windows. If she performed an amazing acrobatic feat, she might be able to kick out the glass, then swing out and climb onto the roof. Good, Amaranthe, that works for Sicarius. Now how are you going to get out?

She remembered the grates and the stacks of ice stored beneath the floor. She shoved aside sawdust and found an entrance. The inset handle required a twist and pull that only someone with thumbs could open. She hoped that thing out there had nothing of the sort.

“You coming?” she asked over her shoulder.

“It’s cramped down there; a poor place to make a stand.” Sicarius’s gaze drifted toward her, then toward the windows and up the stairs, as if he sought an alternative.

The creature slammed against the door. A hinge popped off. Wood splintered. Only the bar kept the door standing. And that would not hold long.

“Fine,” Amaranthe said. “Let me know how it goes up here.”

She grabbed the lantern and climbed down the ladder. She paused to close the grate. Sicarius appeared and caught it before it fell. He waved for her to continue down, then slipped in and secured the grate behind him.

“I thought you might change your mind,” she said.

A crash came from above—the sound of the bar shattering and the door collapsing. Feet or paws or something like padded through the sawdust.

Amaranthe wished she knew what the creature looked like, specifically if it had digits that would allow it to turn the handle to their hideout. Or if its strength might let it rip the grates open without bothering with a handle. She shivered. Maybe she should have tried the window route.

There was not much room between the stacks of ice and the wall. A block pressed against her shoulder and numbed her arm. She wished she had grabbed her parka.

The footsteps altered pitch as the creature moved from solid floor to the grate. Tiny flecks of sawdust sifted through. With the darkness above, Amaranthe could not see anything through the tiny gaps in the metal. She could only hear the creature. Sniffing.

Sicarius faced the entrance, his back to her and the lantern. Neither of them spoke, though there was little point in silence. It knew where they were.

The scrape of claws on metal replaced the sniffing. Slow and experimental at first, the noise then grew faster, like a dog digging under a fence.

When claws slipped between the gaps in the grate, she sucked in a breath. It was the span between them that unsettled her. No animal she had ever seen had paws that large.

She lowered her eyes and stared at Sicarius’s back, the steady expansion and contraction of his rib cage. The air felt tight and constricting, and her own breaths were shallow and fast. She tried to emulate his calm. After all, he had not drawn a weapon. Maybe he knew they were safe. Or maybe he knew fighting the creature was pointless.

Above, the clawing stopped. Nothing moved.

A soft splatter to Amaranthe’s right made her jump. At first she thought it had come from the ice above, a drop melting. But it steamed when it hit a block. Another drop struck the back of her hand. As hot as candle wax, it stung like salt in a cut. Not melted ice, she realized. Saliva.

Slowly, she looked up. More drops filtered down. Puffs of steam whispered through the grate—the creature’s breath, visible in the chill air. Two yellow dots burned on the other side of that fog. Eyes reflecting the flame of her lantern.

Amaranthe sank into a crouch and buried her face in her knees. She closed her eyes, willing the thing to go away. A drop of hot saliva hit the back of her neck.

Time seeped by like molasses. The footsteps finally started up again. They padded away and moved beyond the range of her ears.

For several long moments, she and Sicarius hunkered there, between the wall and the ice. The cold bit through Amaranthe’s night clothes. Her teeth chattered and she shivered. She held her hands close to the lantern, but it gave off little heat.

“Impossible to tell,” he said.

“Well, I’m freezing. Either one of us is going to have to check or we’ll have to start cuddling.”

Sicarius climbed the ladder. He opened the grate, peered out, then disappeared over the edge.

Once up top, she left the grate open in case they needed to jump back down in a hurry. She looked for Sicarius, but her light did not illuminate much of the icehouse. Snow falling outside the broken-down door caught her eye. The body had been dragged to the side, and only an arm remained in view. Amaranthe swallowed.

“It’s not inside,” Sicarius said.

He stepped out from behind the ice stacks carrying a couple of boards. He resealed the door as much as the warped hinges would allow. The splintered wood did not make a reassuring barrier. Sicarius threw the old bar—now snapped in half—to the side and replaced it with the boards.

“Maybe we should go out and check on that man. See if...” He’s dead Amaranthe. You were too late to help.

He was as cool and emotionless as ever, but his unwillingness to leave the building concerned her. If, with all his skill, he did not want to confront whatever stalked the streets, who else could?