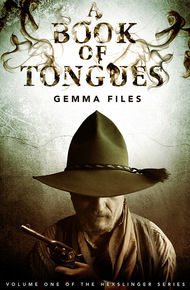 Gemma Files was born in London, England and raised in Toronto. Her story "The Emperor's Old Bones" won the 1999 International Horror Guild Award for Best Short Fiction. She has published two collections of short work (Kissing Carrionand The Worm in Every Heart, both Prime Books) and two chapbooks of poetry (Bent Under Night, from Sinnersphere Productions, and Dust Radio, from Kelp Queen Press). A Book of Tongues, her first Hexslinger novel, won the 2010 DarkScribe Magazine Black Quill Award for Small Press Chill, in both the Editors' and Readers' Choice categories. The two final Hexslinger novels, A Rope of Thorns and A Tree of Bones were published by ChiZine in 2011 and 2012. Since then, she has published We Will All Go Down Together, and Experimental Film, the latter of which won the 2015 Shirley Jackson Award, and has been nominated for the Sunburst Award.

Hexslinger Vol. 1: A Book of Tongues by Gemma Files

Two years after the Civil War, Pinkerton agent Ed Morrow has gone undercover with one of the weird West's most dangerous outlaw gangs-the troop led by Reverend Asher Rook, ex-Confederate chaplain turned hexslinger, and his notorious lieutenant (and lover) Chess Pargeter. Morrow's task: get close enough to map the extent of Rook's power, then bring that knowledge back to help Professor Joachim Asbury unlock the secrets of magic itself.

Magicians, cursed by their gift to a solitary and painful existence, have never been more than a footnote in history. But Rook, driven by desperation, has a plan to shatter the natural law that prevents hexes from cooperation, and change the face of the world-a plan sealed by an unholy marriage-oath with the goddess Ixchel, mother of all hanged men. To accomplish this, he must raise her bloodthirsty pantheon from its collective grave through sacrifice, destruction, and apotheosis.

Caught between a passel of dead gods and monsters, hexes galore, Rook's witchery, and the ruthless calculations of his own masters, Morrow's only real hope of survival lies with the man without whom Rook cannot succeed: Chess Pargeter himself. But Morrow and Chess will have to literally ride through Hell before the truth of Chess's fate comes clear-the doom written for him, and the entire world.

I must admit I like a measure of grit and brutality alongside the weird and the Western, and that's what you'll find in this award-winning novel. Files is daring and bold in her storytelling, just like her characters. It's like being double-dog-dared to ride into dangerous magic and bloody fights, and being unable to resist. – Blair MacGregor

The dream was always the same.

She appeared above him, blown by a black wind, her back-sloping forehead girded with a hissing serpent, her swirling hair stiffened with mud. Her round face was set with jade scales, irregular as leaves. The lids and orbits of her wide-spaced eyes were decorated, mosaic-style, with tiny chips of shell, mother-of-pearl and obsidian. Her breasts were bare, high-set, the nipples pale and small — a virgin's, or even a child's. Sometimes he thought this meant she must have died young. Other times, however, he looked deep into her painted gaze and knew that it meant she might very well never have actually lived at all.

Little king, she called him every time, little hanged man — you who are mine by right, as well as by choice. And he saw a great darkness rise up around her, spreading wide: a hissing cloud of dragonflies whose wings dazzled, every colour in the world at once. Like a rainbow.

Water rose around his feet, burning cold, lapping at his ankles. The sky shone yellow and black. Knives fell like rain.

To either side, grey stone walls retreated into shadow, studded with what seemed at first glance to be rough, irregular stones — but a closer look revealed that the stones were grinning, all leering teeth and empty nose-holes. An endless rack of skulls from whose orifices flowers bloomed at random, luscious pinky-red as heart-meat.

Around her long neck a rope dangled, twisted from corn-silk and stuck all over with thorns. She held it up, looped around both thumbs — spread it wide, a cat's cradle, a pair of opening jaws.

Use this, she told him. Use it, while you still can. Kill what you love, choose your ixiptla, make your necessary sacrifices. Pierce your tongue, run it through the hole, and pray words of blood.

The time of earthquakes is at hand, little king.

The time of great floods, when the upper crust cracks, and the Sunken Ball-Court overflows.

The Gods return, at long last. What we have been promised, we will have. So feed us once more, and apologize, before it is too late.

He didn't know what she meant, by any of it — never had, and never expected to. But then again, maybe it wasn't even his dream to begin with.

Twenty days later, though, there he was again — right smack back in the same place, slogging through black river water to his knees under the jaundice-yellow sky. Skulls to the left of him, flowers to the right, the very air itself an obsidian storm through which knives swirled by, drawing blood 'til it felt like all he had left for skin was a single walking wound. And as he struggled grimly forward, the only thing he could think was this — over, and over, and over —

. . . that Goddamned son of a bitch, he went and left me behind.