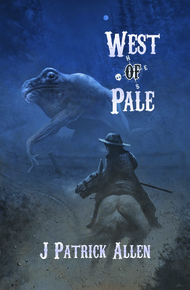 J Patrick Allen grew up exploring the American West with his family. He climbed mountains, fished, camped, visited the family cattle ranch, and explored a castle. Author of the Dead West series, JP writes about the monsters we take with us. Every other week you can listen to JP on the Rocket Punch Radio podcast on iTunes and TuneIn, where he and his friends hold round table discussions about all things geeky. In 2016 his story Dragonfly Shadow was awarded Best Short Story from the Pulp Ark New Pulp Awards. When he's not hard at work he and his wife can be found curled up with a beer and a book or game.

Six-guns, blazing hooves, and the horrors that stalk the night.

Everyone brought something from the old country. Grandfather's watch, and grandmother's china; great-grandfather's folklore, and great-great-grandmother's fairy tales. What is never discussed, however, are the undying characters of the folklore: nix and fairy, goblin and vampire, dragon and eldritch things who all came to America's shores in time with the rhyme of their tales.

After Charlie's father is murdered by something impossible, he discovers a letter that leads him across the wild west. The man who wrote the letter promised to help, if things went wrong. And things could not go more wrong. His father's murderer is on his trail, materializing from lakes, rivers, and stray pools of water. He will not rest until Charlie has joined his father...

It might sound odd to say my favorite thing about a Weird Western with strong horror underpinnings is its realism, but that's what Allen delivers here. The characters we follow are at the same time strong and scared, determined and exhausted. The terrors they face are made all the more horrifying for it, even as they hold tight to their humanity. – Blair MacGregor

I consider it a special kind of madness that had me leaving the house that night, despite fears of something stalking me. Mania and curiosity mashed into a slurry of dread and a sense of looming mortality. Still, I had my head on enough to be considerate: I left money on the dining room table where Frau Sackoff would find it. Some little compensation for what I was about to steal.

A dime novel might have had me running off into the night astride a great hulking black beast of a horse, but truthfully the only thing I felt comfortable taking from the stable was a mule that Frau Sackoff occasionally used for pulling her buckboard. I saddled it and disappeared, hopefully to return triumphant and avenged of Father's death.

A road followed alongside the river, connecting the various scattered communities of the Missouri Rhineland. This was the path I took on that clear and cold late March night. I traveled simply, with only the clothes on my back and with the Sharps across the saddle. Now today you don't often see a Sharps rifle, or many buffalo guns at all since those beasts have been all but driven to extinction. But let me tell you about that rifle. It was nearly as long as I was tall, well darkened with age, with the soft angles and curves of a beautiful dancing woman.

Guns were a work of art back then. Our rifle in particular was an old soul even when Father purchased it—a smoothbore, which was an oddity even back then. But that simply meant a poor German immigrant could get a good price on a tool to scare up a little meat for the dinner table. It could only hold one round and was a chore to load, but if you had a steady hand you could tag a critter from a tremendous distance. All you needed was one shot.

I'd taken a blanket for a bedroll and a few days' worth of food. Father had taught me to shoot, so I thought I'd hunt up some meat when Frau Sackoff's biscuits and jerky started to run low.

When the road began to drift away from the river I felt a knot loose itself in my chest. A scattering of maple and sycamore blocked the river from view though I could still hear the flow, still smell the fishy river mud churned up by spring rains along the banks.

A waxing quarter moon provided all the light I needed that night, and it was well into the sky when the tense sensation of eyes returned. I cast my eyes over my shoulder, seeing only the dark shadows of grass and trees crowding over the road.

My blood froze. A moment after, the mule stopped and I realized that I had a strangling grip on his reins. A moment later I realized the sound was nothing more than the cry of a fox. Somewhere out there beyond what I could see a farmer was losing chickens. But at least it wasn't the monster.

The mule blew a snort of air, tossing its head in complaint of the brief run. I caught my breath and laughed. "I'm most sorry about that, Mr. Mule. I thought there was a monster on our trail."

Lights appeared as we rounded the bend of a hill. A small farm where someone in the house was up even at this time of night. I could just make the vague shapes of grape vines. A fence ran right up to the road, and just behind it a pair of cows drank at a small pond.

A warm place to sleep, even a hay loft, sounded wonderful. On the other hand, a boy showing up in the middle of the night only a few miles from town was sure to elicit comment. And the name of Florian Kirchner was well known. I would be recognized. For a moment I wondered if perhaps it was time to find a place to camp.

I began to let the farm disappear behind me when I heard the cows. The lowed, disturbed, and the sound of splashing water carried across the night air to me. I turned, slowing the mule.

There, by the light of the moon, I first saw it.

A bulbous shape like a man with two arms and legs, yet unlike a man in proportion, clambered over the fence and shambled into the road. Its eyes flashed, catching moonlight and I knew they were watching me.

My ears strained for any sound they could grasp. It was for that reason that I caught the words it spoke. "I thought I had smelt a boy-child in that house."

The mule danced sideways, likely sensing something was amiss. That was when the shape squatted low and sprang into the air. The jump handily ate ten feet and converged on me.

"G'yap!" I whipped the reins, but Mr. Mule needed no prompting. It took off down the road, screaming terror and nearly bucking me off. The gun rattled in my lap and I almost lost it.

We turned a corner and the path widened into a traveled road, ditches on either side. Checking behind me, I knew it was still there. Trees created pools of black, cut only by where the moon turned the packed dirt white. The shape would vanish into those pools and then leap out again, suddenly much closer. With each leap it hissed and spat.

"Kirchner!" it cried in a strangled, playful voice. "Give me what is owed!"

I screamed and the mule bolted just ahead of the creature's webbed, clawed fingers. Behind me I saw the creature rear up like it was taking a deep breath. I don't know if it was instinct or some quiet warning voice, but I ducked. I felt more than saw the long, barbed tongue fly past my ear.

I looked over my shoulder to see the dark form drop to fours and leap again into the air. It cleared ten, perhaps fifteen feet and then again with another leap. I whipped my reins harder. The mule brayed a scream and tried to jerk them from my hands.

It caught an overhead branch mid-leap and rather than plowing toward me it dropped into the ditch to one side of the road. I heard a splash of water deeper than I would have guessed the ditch held. I hardly had time to think about what I'd seen before the creature burst from the water in the opposite ditch, ahead of us.

We were faster, but just. As we shot past it, the creature cursed at me and in another leap grabbed onto the mule's hind. The smell of river water, fish, and rotting meat was overwhelming. Mr. Mule bucked onto its front hooves and kicked with the back. I heard the sound of cracking bones as I was nearly pitched over the front of my saddle.

Regaining my seat, if just, I looked back over my shoulder. The figure lay in a pool of moonlight, still. Quickly it was carried out of view by a shifting of cloud and tree cover, and by our own hasty retreat.

I sucked in a shuddering breath and exhaled with a moan. My hands shook and I didn't trust myself to really control the mule's path. Smartly, it continued along the road and slowed after a mile or two. When I could think again I stared at the ditches to either side of us. They could not be connected. How had the thing done that trick?

"It hides in water."