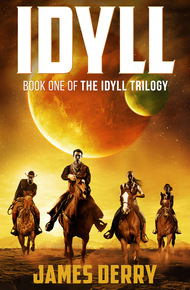 James Derry has been writing or drawing stories since the day his parents let him borrow a ballpoint pen. That's when he created his first magnum opus in blue ink: a comic-book parody of Ghostbusters called 'Roastbusters.' Hey, he was ten.

He studied art in college, and eventually his aspirations shifted from being an illustrator to being a graphic designer. He returned to writing ten years ago after meeting his wife. He currently resides in Atlanta and spends large chunks of his free time working on (and reworking) a variety of fiction projects.

Idyll is a rugged planet—a new, simpler start for some 10,000 settlers who have fled Mother Earth. But a strange 'plague' of contagious sleep has devastated their Settlement, sparked by a mysterious mantra called the Lullaby.

After a three-year quarantine, Walt and Samuel Starboard set out from their ranch on a mission to cure their comatose mother and find their missing father. For days they ride through a blighted landscape: deserted cabins and gravestones and the ruins of towns destroyed by fire. Just when the brothers are about to give up, they stumble upon a second pair of survivors, two beautiful and determined sisters.

Miriam and Virginia Bridge offer new hope, but they also present new problems. Stirrings of emotion and shifting priorities threaten to set the brothers against each other. Can Walt and Samuel overcome years of festering resentment, or will their rivalry tear them apart before they can reunite their broken family? And will any of them survive the revelation of who—or what—unleashed the Lullaby on their home world?

Isolation is a given in the wilds, but is harsher when it's driven by a deadly and highly contagious illness, and Idyll captures that sense of rejoining a greater world in unexpected ways. Derry's story combines that sense of an open frontier with the deep family drama of brothers trying to find a way to survive while struggling to make their place in the world, – Blair MacGregor

Marathon—if it still existed—waited in the east. Samuel Starboard led Titan that way, where the border of the family's ranch was defined by a ridge of quartz that was the color of old teeth. In some places the rock crystals rose in spires, four meters high. Titan wound her way up the brown slope to a large fissure in the ridge. A single beam of wood spanned the gap, and a hand-painted sign leaned against the beam. QUARANTINE. KEEP OUT. Samuel dismounted, set aside the simple barricade, and led Titan through the pass and into the homestead of Abram Stow, who had been their father's foreman for a decade.

His older brother, Walt, rode up on his usual horse, Maggie. Behind them, the big mules Whitesocks and Coffee pulled the field wagon, which bobbed over chunks of rock on its broad, flexible wheels. The wheels were hollow in the middle so that they reminded Samuel of stout barrels, rolling on their sides. One additional horse (Stew) and two additional mules (Pointer and Rosie) followed along at the ends of a spider-tether.

Walt wore one of their father's wide brimmed hats. That style was fine for a rancher in his forties, but the homesteaders of Walt and Samuel's generation, men in their twenties, wore vented hoods. Samuel wondered if his brother knew how pretentious he looked, similar to a cowboy in a children's picture scroll. Walt rode with his narrow chest puffed out, inflated with an air of ostentatious perseverance. A good rancher was supposed to make his riding look easy, and it was obvious from Walt's rigid carriage that he was not a good rancher. His mouth was locked in a line that turned down slightly at the edges, and the dark circles under his spectacles added to his somber air.

Years of heavy rain had carved gullies across the dirt road that cut through Mr. Stow's property. At one onerous washout, Walt had to fumble for the wagon's remote so that he could bring the team to a halt. The remote triggered a brief backward pressure along the harnesses of the mules and brought them up short, huffing, about two meters from a deep gap in the road.

Walt dismounted and used the remote to adjust the active-pattern traction on the wagon's wheels. On foot, he coaxed the two mules across the gully.

Samuel kept riding. By the time he reached their foreman's house, Walt was nearly half a kilometer behind him. That gave Samuel too much time to stare at the house and think. Old Stow had been a polygamist—a rare, yet prolific, breed of homesteader in the western counties. He had three wives and thirteen children. In the past, a gang's worth of Stow's children would have come hurtling out of his house to greet Samuel. But now the house was painfully quiet. All but one of its faded red shutters were nailed down. In the one open window, Samuel could see straight through to the daylight in the backyard.

The wagon team had finally caught up. The active-pattern wheels practically buzzed with current, and thick chunks of orange dirt clung to their denticles. Walt plucked one wax plug from his ear. "I could have used your help back there."

Walt's lips pressed together, and he tapped his glasses. "Abram wouldn't let his road go to pot. He must be gone. Maybe he took his family to the county seat. Or to Belleterre."

"We could search the house."

"They could be…" Walt glanced back at the casket-sized canopy on the wagon. "There could be sleeptalkers in there."

"If there are sleeptalkers in there, who's keeping them fed?"

Walt shrugged. They both knew the house was empty, and that plain fact made Samuel clench his jaw. Part of him expected the Stow house to be forever filled with happy, noisy kids. Once, Old Stow had joked, "You Starboards are so proud about populating the land with slugs and crickets. I'm populating this county with little versions of me!" Samuel had retorted, "You're right. This planet is doomed." It had been a typical exchange between ranchers, filled with ball-busting and bravado, but Stow's pride in his children was completely genuine. Now there was a chance that he and all of his family had fallen victim to the Lullaby. They might be dead. Or hovering near death, comatose.

"Hey!" Samuel yelled as loud as he could. The horses and mules all whickered and skipped. Whitesocks and Coffee jerked the wagon, and its buzzing wheels lunged forward, greedily devouring another meter of road. The casket-sized canopy caught on a breeze and pulled loose from its moorings. Its front end fell to the dirt.

"Damn!" Walt cringed in his saddle. No noise came from the house but the thin echoes of Samuel's cry. Walt said, "I thought you liked it quiet."

Samuel's throat hurt; his shout had been close to a scream. Walt saw that the canopy had fallen, and he dismounted in a huff. "Grief! I thought you checked Mama's bed."

Samuel dismounted as well. His cheeks were burning as he fumbled for his earplugs. At least the plugs would put an end to Walt's scolding.

The canopy was made of a polymer sheet and barrel hoops, cut in half. It was extremely lightweight, but it was also weather-proof. Walt unclasped its back end and handed the whole thing to Samuel. Despite the jolting of the surprised mules, Alma Starboard was still positioned correctly on her polymer mattress. Her eyes were closed. The flesh of her face was lax. A horrific peace had settled over her features—except for her lips, which were fluttering and trembling like the wings of an insect caught in glycerine. For three years Alma had been sleeping—a never-ending slumber—and she was always murmuring the same series of quick, soft words. Samuel yearned to know what their mother was saying while she slept, but he knew that he could not. If he heard those words he would fall into a deep sleep, and, like his mother, he would never wake up.