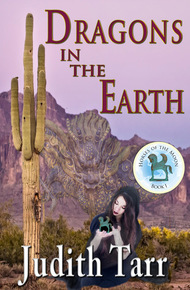 Horses of the Moon Vol. 1: Dragons in the Earth by Judith Tarr

Claire is barely scraping a living on her friend's ranch near Tucson, Arizona. She looks after the long-abandoned horse facility, makes occasional attempts to resuscitate her academic career, and pays the bills, more or less, with her skills as an animal communicator. Those skills don't always let her say the tactful thing to the human with the checkbook. Sometimes she has to tell the truth.

After a particularly unfortunate session, Claire gets one last chance to keep her home and her livelihood. A small herd of horses needs a place to live and a person to care for them.

But these are no ordinary horses. They represent an old, old breed, the rarest in the world, and they protect an ancient and terrible secret. And something is hunting them.

The ranch is a perfect sanctuary. The powers that live on and under and above it can protect the horses—if Claire can control them. But first she has to control her own abilities, and learn to believe in herself.

Tarr has always had the ability to transport me into the fantastic, and this novel does so masterfully. Her incredible skill and experience working with and understanding horses comes through here strong and clear, and will invite you to see the world and its powers in unexpected ways. This novel made me want to run off to discover the hidden magic of the desert and its creatures for myself. – Blair MacGregor

I feel them. Sometimes I see them—in my head, in dreams, in the hunched shapes of mountains curled around the flattened bowls of the valleys.

They're always there. I'm always aware of them, but sometimes the awareness sinks down deep, till I can almost forget them.

That day, for example, when I'd finally had enough of failing to make a living.

I don't exactly live at the back of beyond, but a mile and a half of ranch road and a pair of dry washes can keep the worst of the city folk at bay. Unfortunately, my client was desperate. A phone consult wasn't enough. She needed to see me in person. Now. Immediately.

She cruised past the long-empty horse pastures in a hot-pink limo, parked herself on my weather-worn deck, and brandished her fashion accessory.

Somewhere under the hot-pink dye was a teacup poodle. He knew exactly what he looked like, and he was not even remotely happy about it.

"Dorrie says you're the best," said the owner of the arm he was draped over. No human emotion could penetrate the Botox mask, but her voice had a raw edge. "I need the best. Bruno hasn't been himself, and he won't talk to anyone. He bit his masseuse. His astrologer says there's no cosmic reason for him to be so difficult. Will you please ask him—"

I'd had a bad morning. One of the swamp coolers had died with a puff of smoke and a smell of something burnt and electrical, and it might be October but it was still ninety degrees in the afternoons. I needed that cooler.

I also needed this appointment, or there wouldn't be any money to pay for the cooler repair. I braced myself to nod and look sympathetic and tell the client what she wanted to hear.

The dog under the pink fluff looked me in the eye.

There weren't any words. There seldom are. I have to translate.

"He says," I said, "that all that's wrong with him is you. Dye him pink one more time, and he'll bite you harder than he bit the feelgood-hands lady. He wants to be a dog. You want a handbag, he says, get one that's dead already."

When I snap and say exactly what the animal is saying to me, sometimes their captors start screaming. I got slapped once.

This one fixed me with a flat, hard stare. "Bruno loves me," she said.

No, he doesn't. I bit my tongue to keep from saying it aloud.

Bruno sank his teeth into her arm.

That shocked a shriek out of her. The limo driver had a first-aid kit and paramedic's training, which was a good thing. Bruno had strong jaws for a tiny dog, and teeth like needles.

They roared off in a cloud of dust. I stood on my front step, with the heat already coming up, and my bank balance no happier than it had been before.

Down in the shade of the mare motel, Rosie's long ears angled toward me. The two horses were out of sight in the mesquite bosque, deep in the shade, but she'd heard the commotion and come to catch the end of the show.

"Dorrie is going to kill me," I said to her.

I looked equally pointedly at her well-upholstered ribs. "You'll get lunch when it's time for lunch."

Rosie farted eloquently. I showed her my teeth and stretched.

The knots in my shoulders protested. I tried to pour the tension out into the ground, but this wasn't letting go. Maybe the ground was full already, with what I'd been dumping into it for the past dozen years.

I had better luck filling my eyes with desert. You'd never know from where I stood that there's a fair-sized city a few miles down the road. All I could see were the remains of the old Arabian farm that used to anchor this end of the ranch, barns and corrals and fences abandoned except for my tiny herd of equines, and all around them, sand and scrub and cactus rolling toward the mountains.

North was the tallest of the ranges, rearing almost straight up over the valley. West, the desert stretched for miles until it fetched up against another, smaller, spikier line of peaks. East and south wrapped us around with ridge and range, protecting us from the winds that blew the summer rains out of Mexico. There were more mountains past those, though I couldn't see them through the ridge: a wall along the southern horizon.

Four ranges. Four points of the compass. Navigating's easy around the Tucson valley, if you know your mountains.

I wished my life was that easy to find my way through. I was stalled out, and damned near tapped out. Claire Bernardi, unregenerate horse kid, refugee medievalist, animal communicator to the stars, needed a new swamp cooler, but mostly she needed a new—something. Job. Consuming passion. Life.

A dust devil roared and spun down the wash past the barn. Big one: so tall I couldn't see the top of it.

People out here believe that dust devils are spirits of the dead. Whoever this was was strong, and seriously pissed. It ricocheted off the barn and veered toward Rosie.

She laid her ears flat back, spun her rump, and slammed it with both barrels.

It collapsed in a pile of dust and tiny whirligigs. "That's telling it," I said in the sudden silence.