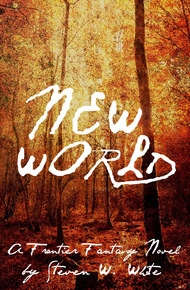 Across the sea lies a newly discovered continent, a world whose forests and beasts are unknown to the recorded memory of elves, dwarves, or men.

In this land called Mira, the brutal sacking of a young colony links the fates of two opposite characters: a twelve-year-old printer's son named Simon Jones and his long-lost uncle Tiberius Bogg, one of Mira's legendary mountain men.

Simon is small, but smart; scared but determined. Bogg, with his raccoon-skin cap and smart-talking grammar abuse, is fast as a splintercat and stealthy as a hidebehind. Together, they turn the tables and pursue their attackers (a cruel knight and his soldiers from the old country) through a wilderness full of extraordinary creatures – jackelopes and thunderbirds, fur-bearing trout and four-legged hills – all culled from American tall tales, Indian legends, and backwoods folklore.

It would be easy to call White's novel a coming-of-age tale, but it is so much more than that. More than anything, I love the exploration of trust—not just of each other, but of one's self—and how the consequences of another's trust are gut-wrenching when danger is hiding in the wilderness... or proudly daring anyone to challenge its power. – Blair MacGregor

As the stink of low tide washed over the village of Fort Sanctuary, a little boy named Simon Jones didn't want to get punched again. His nemesis, a seventeen-year-old thug named Marshall Dunster, was stalking him.

Stealth, that was the key. Change the usual routine. Don't walk home from the printing house down Sunrise Street like always, but turn left at Fife's pub, the Mermaid, where his father spent Friday evenings. Simon's skinny, nervous legs whipped along, taking him through that left turn–

"Gotcha!" Marshall's iron grip found his neck and pulled at his collar.

Simon almost worked free, but Marshall punched the side of his head, which rang like a cow bell at his ear. "Give me your money."

Simon's Adam's apple struggled up and down past Marshall's rough fingers. "My money?"

"I get bored just pounding you. Your dad's got money... so you got money. Hand it over."

Another punch to his head. The noise made his knees wobbly. "Coin," Marshall said. "Now. And quit using words I don't know."

Simon reached into his trousers pocket and withdrew a few coppers. Marshall released his neck and clawed at the coins in his fist. Simon let them fall to the dust.

"Hey!" Marshall threw another punch at Simon's head, but Simon dashed away, and Marshall's fist only swooped through the air.

Simon ran down the alley beside the Mermaid and crashed into a wall of muscle in a cotton shirt, stinking of beer and sweat.

Yohann Gordon, the brewer's son, had caught him. Marshall's friend. "I never seen a worm move so fast. Hey, Marsh, where's this twerp off to?"

Marshall didn't answer. Marshall never answered. The groan of yielding wood, then the heavy crack of splitting beams, came from the front gate. All three boys froze, and the screams that followed chilled their blood.