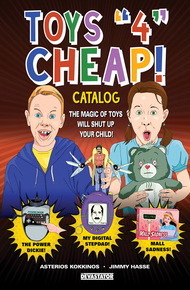 Asterios Kokkinos is a comedian who has written and performed for The Nerdist, Geek & Sundry, Paste Magazine, Something Awful & the Maximum Fun podcast network. His only childhood friends were toys, and even they eventually disappointed him. When not writing insane stuff for people who have somehow agreed to pay him, Asterios can be seen yelling at the TV with his father or taking a nap. For more, visit asterioskokkinos.com and follow him on Twitter @asterios.

Jimmy Hasse has contributed to The Devastator since the beginning. Originally from Ypsilanti, MI, Jimmy moved to Chicago with a BFA in Illustration from Grand Valley State University, and a deep understanding that nobody would really give a shit. After three years of freelance illustration and working at the Lincoln Park Zoo, Jimmy became an intern at The Onion, where he worked his way up to his current position, Managing Graphics Editor. Jimmy is, ironically, a toy collector, and those financial decisions echo in his bank account to this very day. For more, visit jimmyhasse.com.

This hilarious catalog of insane and dangerous toys by Asterios Kokkinos (Something Awful) and Jimmy Hasse (The Onion) is a sharp and unrelenting satire of yesteryear's most beloved playthings.

Toys "4" Cheap is your #1 source for overlooked and discontinued toys like the Magic 1-Ball, My Digital Stepdad, and The Lack of Self-Care Bears. Make your selections, call (555) TOY-FUPB, then pick up your items at one of two convenient Montana Badlands locations. Remember: We put the "fun" in "No Refunds!"

"I've been a huge fan of the author's writing for over a decade. Whenever someone mentions Asterios to me – after gushing over his Twitter (@asterios) or his latest podcast appearance – they usually say the same thing: 'How come he's not famous yet?' His comedic voice is so strong, so intense, and so bizarre, once you experience it, you'll be hooked for life. So let's all do Asterios a favor and read his book of unbelievable toy parodies, and get him a little closer to the fame he deserves." – Geoffrey Golden

What's that FUN rattling around your LUNGS?

They'll run loop-de-loops around your arteries, and BURN THE RUBBER off your ventricles! Inhale a can of our CRASH-EM-UP RACEWAY and build a demolition derby in your pancreas!

WARNING: MICROSCOPIC MACHINES™ WILL DO PERMANENT DAMAGE TO YOUR SENSE OF BOREDOM AND/OR LUNGS.