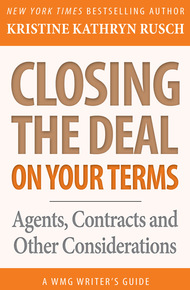 Closing the Deal on Your Terms by Kristine Kathryn Rusch

Making the wrong decisions on the business side of publishing can destroy a writer's career. Longtime writer, editor, and publisher Kristine Kathryn Rusch knows this better than anyone. So she decided to write a book on the dealbreakers in contracts, agency agreements, and other business things that will ruin a writer's future.

Little did she know that it would take her seven months, lots of hand-wringing, and a lot of help from the readers of her blog. The result, Closing the Deal…on Your Terms, shows how the tiniest of decisions—talking to a Hollywood producer on the phone, falling for a typical agent's ruse of masking a contract for a letter—can have lifelong consequences.

Written for every writer, whether self-published, traditionally published, or hybrid, Closing the Deal…on Your Terms takes writers on a journey that will help them understand what they're selling and what they could accidentally give away.

Kristine Kathryn Rusch and Dean Wesley Smith are like my version of Lewis and Clark in exploring the rugged uncharted wilderness of the publishing world. We began our writing careers at about the same time and have spent decades trying to figure it out, sharing information with each other. I would not have a writing tools bundle without a title from each of them. – Kevin J. Anderson

In 2012 and 2013, I published a series of blogs on contract deal breakers for traditionally published writers. Those blogs became a book called Dealbreakers. I've been promising to update it for years now, but I'll be honest: The very topic discourages me.

Still, I have come to the point where I can't ignore the contractual changes in the industry any longer. With the help of my readers, I spent over four months exploring the state of contracts in the publishing industry. I examined everything I could find, from terms of service to existing contracts. I discovered some pretty slimy contract terms, masquerading as "good" contracts. I learned that agent agreements have proliferated, to the detriment of the writer. I learned that publishers are now interpreting seemingly out-of-date clauses in a brand-new, and somewhat frightening, way. I learned that some online services for writers have rights grabs buried in the Terms of Service.

Because, in the intervening years, the industry changed dramatically. As the industry changed, so did my opinion about everything from hiring an agent to whether or not a traditional book publishing deal is a good idea. If you compare the old Dealbreakers to this volume, you will think—at times—that they were written by two different writers.

They were. One writer is older and wiser.

The point of this entire book is to help writers and others make informed decisions about the contracts they sign and the deals they make. I may disagree with your final choice, but I will defend it to the death—as long as your choice is an informed choice.

Your career is different from mine. Your needs are different. And your desires are different. You might sign something I would never touch or you might find me too lenient. That's all well and good, as long as you make the best choice you can at the time you make it.

And as long as you continue learning and growing.

That has been the most fascinating part about this process for me. I'm still learning, each and every day. I'm discovering new things. Some of them are things I wished I hadn't seen. Others make some bad decisions in my past even clearer. And still others show me just how different 2016 is from the publishing world I first entered, decades ago.

This book has several loosely defined sections. You can dip in and out of the book if you would like, but it is meant to be read as a whole.

I do have both types of readers in mind. I'll do my best to point out when you need to read a previous chapter to understand the current one. And I'll also repeat a few things in some chapters, so that the people who dip in and out can follow.

I doubt I'll write another version of this book. To be frank, the experience of going through these contracts, and seeing how they've been weaponized against writers, left me very discouraged. Many of you have written to me to help me through some of the darker weeks, and I greatly appreciate that.

I appreciate all of the interaction. This book would not exist without the input from the blog readers, industry professionals, and a few of my lawyer friends behind the scenes. Also, many of you helped by sending donations to keep me writing when the going got tough. Thank you.

And now, onto the heart of the project.

I do hope that the information inside this book helps you make the right decisions for yourself and your career.