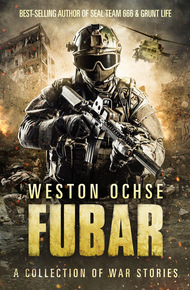 Weston Ochse is the author of eight novels, including the upcoming SEAL Team 666 from St. Martin's Press He’s won the Bram Stoker Award for Superior Achievement in First Novel and been nominated for the Pushcart Prize for short fiction. He lives with his family in southern Arizona. His website is www.westonochse.com.

War. To quote Edwin Starr, "What is it good for?"

FUBAR by Weston Ochse is a 90,000-word collection of fiction and non-fiction. A complete cumulation of Weston's war stories and essays, created over nearly twenty years by a military veteran with more than thirty years of service. From 1997 to new works never before published, this collection brings together all genres of the work Weston has written that is based around conflict and war.

This collection covers the long writing career of one of the world's best writers of military fiction and military horror. Ochse is a career soldier who knows how to get the horror war right into your head. – Cohesion Press

Welcome to FUBAR. As most of you know, FUBAR stands for Fouled1 Up Beyond All Recognition and is one of those military terms which has invaded common speech. Like the acronyms SNAFU2 and REMF3, FUBAR finds the most use when bad things happen. And in the military, bad things are always happening. We're ether doing bad things to other people or planning to do bad things to other people, or other people are doing and planning to do bad things to us. We often find that it's our own kind. I can't tell you how many times a drill sergeant or platoon sergeant has exclaimed that either me or my kit was FUBAR. There were times when the word was used so often I considered changing my name to FUBAR.

It certainly would have made things more interesting.

I can see it now.

"Who's that over there?"

You see, because although I was athletic, I was also prone to accidents. I didn't pay attention to things and in the military, it's all about paying attention. Just look at the claymore mine. It was architecturally engineered for people who don't pay attention. It has the words FRONT TOWARD ENEMY emblazoned on the deadly side for a reason. If one were to ignore that specific guidance and place, arm, and fire their claymore, they'd be FUBAR'd for one brief magnificent second, right before seven hundred ball bearings flew through them at twenty-six hundred miles an hour.

Thus the idea of creating a collection of war stories called FUBAR was born.

As I searched for pieces to curate for this collection, I struggled to find a theme. I didn't want the works placed randomly. I wanted them to mean something. My desire was for you the reader to experience this in a way that would give you the most benefit. For those of you with little or no military experience, it was to give you a little insight, a peephole, if I may, into the life of a warrior. For those of you with experience, I wanted to provide stories that I know will resonate. In a crazy trick of Schrödinger time, I can see you in the future, nodding and chuckling as you read, acknowledging and recognizing something I've written, while remembering in your own past, how it had been for you in a similar situation.

Then when I saw Welcome to the War Zone, I knew that it had to be the first story. I wrote that within hours of landing in Kabul, Afghanistan. I wrote it in such a way to get your adrenaline up, to demonstrate the immediacy of the danger, and to raise you pucker factor to eleven. The essay fittingly sets the stage for the rest of the book.

Then I set about trying to curate pieces that would represent me as a lifetime warrior. Long ago, I set out to determine what type of warrior I wanted to be and what kind I refused to be. Looking at my history, I can trace my warrior lineage in every American conflict and war dating back to the Revolutionary War where Captain Michael Motz of the Northumberland Militia attached his men to the 3rd Pennsylvania Regiment, Continental Line in order to fight for the independence of a new nation. We've had all sorts of warriors in my family. Soldiers, sailors, airmen, marines, Indian scouts, Indian fighters, cavalry officers, WWI grunts who were mustard-gassed in the trenches, Civil War regulars who fought against each other, infantry men who fought island to island in the Pacific, and sailors aboard the USS Arizona, now resting beneath the azure waters of Pearl Harbor. As I learned of them, I also learned about what sort of persons they were. When I could, I sleuthed what they believed in.

The one continual theme I encountered as I searched my own past was that they were all humanists.

So what is humanism? Humanism is a philosophical and ethical stance that emphasizes the value and agency of human beings, individually and collectively, and generally prefers critical thinking and evidence over established doctrine or faith (Wikipedia).

…the value and agency of human beings…

Yes, I sang cadence about nuking people until they glowed.

Yes, I dehumanized my country's enemies by calling them names.

Yes, I played the Us vs Them game.

And of course I inculcated a hatred for those who would do despicable things to my fellow warriors.

I never ceased believing that these enemies of mine weren't as deep and thoughtful and as intelligent as myself. In some cases this task was extraordinarily difficult, but I strained to be the humanist I was determined to be.

I felt the same way about the minority groups within my own military. Part of being from a family of humanists, I was raised to treat everyone with respect. Black, white, brown or yellow, Jewish, Muslim, Christian or Atheist, straight, gay, bisexual or transgender. Everyone. Respect. All the time.

So this idea of humanism and respect was front and center as I curated these stories, because I believe that a keen-eyed, blood-covered warrior can be a humanist at the same time they're fighting for those guys and gals in the foxhole next to them. Not only are there blood, guts and bravado war stories in this collection, but we also have thoughtful pieces about PTSD. You'll find works about gay soldiers and about spousal abuse. You'll find stories about the ultimate cost of responsibility and the terrible toll of war. I included a broad spectrum of my works because if you're going to read a collection about me, I want you to understand me. This collection you're holding in your hands or listening to, for all intents and purposes, it is me.

I've even included a piece I originally created as performance art on the web. Inspired by the inestimable Coeur D'Alene American Indian poet and story teller Sherman Alexie, I created a twenty minute piece that has never been in print until now, but has been viewed hundreds of times on military holidays. I wonder if those who saw it got that it is meant to be both patriotic and protest. Just as Welcome to the Warzone was meant to get your heart kicking and your blood pumping, Doctor Doom's Guide to the Universe and Special Rules for the Burial of Christian Insects is meant to show you the complete immersion and indoctrination basic training can be.

Which is sort of what this collection is.

So welcome to FUBAR.

This is my journey.

And now it's yours.

2 – Situation Normal All Fucked Up