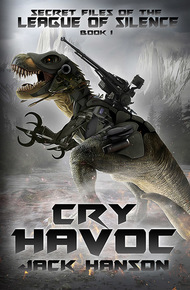 Louder than God's revolver and twice as shiny, Jack Hanson was once told to "write what he knows". After two wars in Afghanistan and Iraq as a paratrooper, he figured he knew a thing or two about what combat was like. He enjoys boxing, firearms, and wearing t shirts in boys' size small. Someone once told him there were rules about not posting bathroom selfies on your Amazon author page, but he didn't care about those rules cause he was too busy making his own and looking jacked!

In the year 2410, the catch-cry 'Join the military, see the world' still has the same appeal. When the military consists of cosmopolitan alien races, constant conflict on the borders, and intelligent dinosaurs fighting alongside you, it's so much more enticing. In the end, everyone serves in the Terran Empire. This service will be the last touch of youth for a group of raw cadets before they are thrown into the grinder of war. They don’t like each other and are full of conflict and self-doubt. Their instructor, a veteran of a hundred battles, doesn’t care. He’ll bring them together whether they like it or not. Unknown to them, they are the keepers of a forty-year-old secret, the newest addition to the legacy of humanity's greatest champions. They were brought together to repair that legacy, but it remains to be seen if they will overcome their own flaws, rise to be the heroes they were born to be and, as their motto says, cry havoc.

I had to include this series by one of the best military sci-fi writers I've ever read. Combines HALO with Dino-riders to come up with something totally unique and very character driven, while still thrilling out pants off. – Cohesion Press

Combat is the ultimate furnace; burning away impurities and ensuring only the best remain.

The rai'lith glanced off something and struck into the air with enough force to cause the enemy Khajali to step back. Paris leaned his head back, and saw familiar black scales come into view, sparks dancing over Pairna's body as he stepped over Paris to defend his fallen student.

"So, the false Khajal attacks the unblooded now?" mocked Pairna, who stood a head taller than his enemy.

"The only lie is that which you live, heretic! You have no right to interfere in a duel. Rillik or Khajali, he drew the Second Breath so he lives the Code!" snarled the Peacer.

"He is unblooded," repeated Pairna, shifting his stance and using one claw to push Paris behind him.

"He bears the sacred metal, and he fights like one of the Pure," spat the Khajali, sending a glob of something viscous against a crate where it hissed. "I refuse to believe it."

"You said it yourself; he is a child of the Weeper and Rhulo. We did not think he would bear the blade against a Khajali his first time out. Regardless, he is not released," stated Pairna.

"Inconsequential!" the Khajali shot back, chopping its claw for emphasis.

Pairna nodded, and his response belied the animosity that hung in the air after he stated it. "Indeed," he said simply, and raised his rai'lith.

"You… You cannot," the enemy said, raising his own rai'lith to parry as he took several steps back.

"I do. Prepare yourself," Pairna told him, and then blasted forwards in a blur, sending the Khajali flying. His foe managed to roll to his feet, and raised his weapon to block the overhead chop that Pairna delivered. He swept his leg out as soon as Pairna landed, and Pairna responded by buffeting him against the head and sent him sprawling. The Peace Federation Khajali leapt to his feet, parrying again, and his claws attempted to dig into the exposed flesh of his foe.

Thrombium turned Khajali claws, and the two sworn enemies locked rai'liths, hissing at each other as their powerful jaws snapped shut in an attempt to score a wound. The Peace Federation Khajali was nimbler, but Pairna was more powerful, and each used their respective advantage to try and find leverage against the other.

"The Star Blooded send their children to fight with the False Peace?" mocked Pairna as he bore down with his weight, forcing the smaller Khajali backwards.

"The Sky Callers take the meat of the prey, so who are you to judge?" spat back the Star Blooded, finally twisting out of Pairna's grasp. He whipped his weapon around, trying to strike at the exposed flesh of his foe, but Pairna blocked twice and then leapt clear. His own weapon darted in viper-quick like a lance to impale his enemy.

The Khajali dodged away, planted his claws into the wall and leapt over Pairna, landing behind him. He found his attack knocked aside with a parry, and the two continued their elegant and brutal duel with the battle booming behind them.

The two cadets didn't bother to turn and watch the explosive duel between the two Khajali. They were dealing with a suicide rush by the last remnants of the Peacer forces. Paris's machinegun had finally jammed, and Sand gave up trying to fire it, drawing his blade just as the first Naith cleared their barricade. Green skin showed where it wasn't covered by black battle armor. A breathing mask pumped the nitrogen gas the Naith inhaled like other species did oxygen.

Sand butchered the first one, reversing the grip on his blade and driving it into the guts of the Naith. The body went stiff as the alien paused in the middle of drawing out its crysblade, and fell with a groan to the floor as blue blood poured out. Salem had slammed the second one to come over the top in the head with the butt of her machinegun, and had staggered it. Before it could turn back around, she fired a burst into its back and it went sprawling, dead.

She turned and raised her weapon in time as another crysblade came whipping in. It buried itself into the machinegun, and she had the presence of mind to twist the weapon out of the Naith's grip. She hooked her hand into the breathing tubes. Even though they were reinforced, the trooper still panicked and went for her hand, grabbing at her wrist. It was as she had planned, and she drew her blade and stabbed the Naith, causing blue blood to spout over her grey armor as it fell. Sand dealt with the fourth Naith to rush them, buffeting it with a series of blows and stabbing it through the head.

The fifth one had stopped short, and raised the bow-shaped needle caster to fire at point blank range as Sand and Salem looked up at the same time. They witnessed the Naith's top half simply vanish, the body blown out into a blue streak across the floor. The Naith's knees crumpled and it fell to the ground. Turning, they saw Black holstering his pistol as he walked over, unstrapping the shotgun from his back.