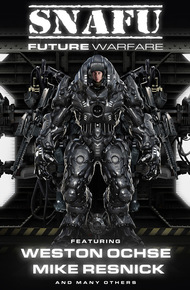 WESTON OCHSE (pronounced oaks) has won the Bram Stoker Award and been nominated for the Pushcart Prize. In addition to his previous SEAL Team 666 novels, his work has appeared in comic books and magazines such as "Cemetery Dance" and "Soldier of Fortune". He is a retired U.S. Army intelligence officer and current intelligence officer for the Defense Intelligence Agency. He lives in Arizona within shouting distance of the International Border.

Michael "Mike" Diamond Resnick, better known by his published name Mike Resnick, is a popular and prolific American science fiction author. He is, according to Locus, the all-time leading award winner, living or dead, for short science fiction. He is the winner of five Hugos, a Nebula, and other major awards in the United States, France, Spain, Japan, Croatia and Poland. and has been short-listed for major awards in England, Italy and Australia. He is the author of 68 novels, over 250 stories, and 2 screenplays, and is the editor of 41 anthologies. His work has been translated into 25 languages. He is the Guest of Honor at the 2012 Worldcon and can be found online as @ResnickMike on Twitter or at www.mikeresnick.com.

Join the military, they said.

Meet interesting creatures, and kill them all.

Soldiers fighting aliens in unforgiving landscapes, where every breath could be their last.

Featuring stories by Weston Ochse, Mike Resnick, and others.

From near-future to far-future, featuring some of the best writers working in the field today.

A shift to military sci-fi, where grand-master Mike Resnick takes the lead, while other, newer writers follow in grand style. – Cohesion Press

From SUITS by Steve Lewis

It was dark, about midnight, when something woke Henry Graves. He sat upright in his bed and looked around, hearing nothing but the gentle breathing of his wife, Beth. He contemplated getting out of bed to check the security grid in the next room… A few seconds later he had no choice; an alarm screeched out and woke everything within a mile.

He was out of bed and into the farmstead's security room in a heartbeat, the monitors flicking to life in response to whatever threats the remote ground and satellite sensors had picked up. He was hoping it was just cattle from his neighbour's property – Jenkins was renowned for being cheap with his fencing – but by the slowing spreading blooms of light on the screens it was clear this was something much worse.

"Hank, what is it?" Beth asked as she entered the room. "Jenkin's cows again?"

"Afraid not, honey," Graves replied. "Looks we have deebees coming in."

Tau Ceti IV had taken decades to colonise, and it was a few years after the planet had been successfully terraformed that the aliens had shown up. Coming through dimensional gateways on and just above the planet's surface, the 'Dimensionial Beings' – or deebees for short – had initially wreaked havoc amongst the unsuspecting colonists. If it wasn't for an armed cruiser passing through for R&R, with heavy screens, armoured hull and batteries of hot lasers, the planet would have been overrun.

The invasion was finally broken, the gateways closing quickly and the deebees slaughtered with no line of retreat… now it was only a raid every few years, more a nuisance than anything else.

"Looks like a wide pattern," Beth said, looking over Graves' shoulder at the various screens. "Gates opening up all along the ridge and across most of the farmsteads."

Graves nodded. "They should be easy to mop up, scattered out like that," he said. "I'll go suit up, you get on the horn to Jenkins and the others, make sure they're up and armoured before the gates open completely."

He stood and kissed his wife on the forehead as she slid into the seat.

"Looks like we have about 30 minutes before they open enough to let them through, everyone should be ready and mobile by then," he said.

"Get suited while I make some calls," Beth replied. "Let me know if you need anything."