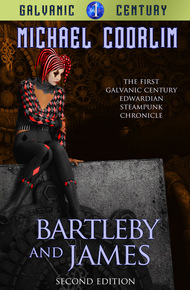 Not bad for a guy who was homeless and unemployed when he started. As the freelance market dried up in 2011, he turned to self-publishing with Bartleby and James, and never went back to the job hunt. In his limited free-time he enjoys unadulterated strong coffee, explorations into esoterica, doodling, consuming media, cooking, and engaging with his fans through social media.

Bartleby and James by Michael Coorlim

Inventor James Wainwright's greatest desire is to be left alone in his workshop, where he can focus on invention and engineering unsullied by the messiness of London society and the meaningless concerns of its upper classes. His financial patron, gentleman Alton Bartleby, has higher aspirations. To continue to receive funding James will have to venture out into the outside world as a detective, turning his inventive genius to the creation of new forensic technologies.

Bartleby and James is a steampunk mystery collection that tells the story of the detectives' foray into private investigation, the first book in the Galavanic Century series of steampunk mysteries and thrillers, taking readers to an alternate 1910s where Queen Victoria yet rules.

Sometimes it's the premise and the world that draw me in, rather than roller-coaster plots or flights of fanciful prose, and the world of steam and manners seems a perfect setting for what I might characterize as "A Curious Gentleman's Guide to the Age of Wonder." Dress it up with a Sherlockian detective, and then double down on the science by giving him a sidekick who's a little less Watson and a lot more Tesla. Throw in an intriguing villainesse to lead the two on a merry chase, and you end up with something that seems entirely of that era: a mystery that invites you to tea and then remembers to send a thank you note afterward. A very proper and polite entertainment. – Jefferson Smith

When Alton Bartleby barged into my workshop to inform me that we were to embark upon careers as private detectives, I was neither concerned nor interested. The man has the sort of intellect that is constantly flitting from one interest to the next, a hummingbird supping on hobby and fad, just as quick to speed off to the next bright flower to catch his eye.

His sudden interest in investigation and private law enforcement was no doubt a result of the bee keeping symposium he'd dragged me to the week earlier, an interest that had flared and faded with the suddenness of a summer storm. The keynote speaker had been the old man Holmes, retired from public life these five years.

His speech had been on the culture of bees, a subject I found to be of passable interest compared to most of what grabbed Bartleby's fancy. As Holmes spoke, I could envision them—cogs in an intricate biological machine of fascinating complexity and fractal in its scope. The remnants of the few entomology classes I'd attended at the Royal Academy of Artificers and Engineers bubbled to the surface of my mind, along with the coalescing of a grand beehive-driven analytical matrix.

Of course, Bartleby kept interrupting the man with seemingly innocuous questions intended to guide the conversation away from insectile behaviourism and towards irrelevancies like classical logic and abductive reasoning, irritating our host and disrupting my concentration. I can only lament the world's loss of its potential honey-and-wax computation device; once a scrap of brilliance slips my mind, it's gone forever. So died the Hymenoptera Engine.

Holmes, of course, was deeply annoyed. Bartleby may be a social savant whose deft control of the flow of conversation slides past most men, but Holmes is a true genius, and was able to intuit exactly what Alton was doing. He refused to speak with us after the event and indeed hastened away to the confusion of the symposium's overseers.

I did not enlighten them.

Instead, I returned to London alone, while Bartleby insisted upon pursuing the Great Detective to Sussex Downs. I have no doubt that Holmes can be a stubborn man, but Bartleby is persistent and persuasive. What transpired is a matter for conjecture, but for my part, I was pleased to have the peace of days while Alton was otherwise occupied.

Until, of course, he returned.

I looked up from my workstation, the jeweller's loupe in my eye distorting his otherwise handsome face. "I've no desire to be a detective."

"That's unfortunate," Bartleby said. "For it's what we're to be."

I thumbed the ridged edge of the headpiece I was wearing, switching out the jeweller's loupe for a pale-turquoise quartz lens and turned back to the gears on my workstation. "I've little time for your games as it is. And would much appreciate you knocking in the future."

"Little time?" Bartleby stepped back outside my workshop and knocked on its corrugated tin exterior. "Busy repairing broken watches for the idle rich?"

"Improving them," I said. "Some of us have to work for a living. And no. Your watch isn't ready yet."

"What about that engine you'd been going on about?" he asked.

I looked up at him. "The Hymenoptera Engine?"

"No, not the one with the bees, and I've already apologised for that. The galvanic one."

"Yes. That one." He leaned back against my workshop's wall. It wobbled. He straightened. "The one I gave you quite a large sum of money to develop?"

He followed my gesture. "Over here? This one?"

There was a thump. "It's glowing now."

"Conversion of kinetic to galvanic energy."

I looked up again. Bartleby was eyeing the Galvanic Converter with some distrust. Unusually wise on his part. "Sometimes development takes odd tangents."

"I imagine so. You can take it to the patent office; I'm done with it."

He tucked the device under his arm. "James, you need to take more of an interest in the business of these things."

"I thought that was why I'd partnered with you."

"Yes, but you shouldn't trust me."

"I don't. Not with unimportant business." I took the ocular array off of my head. "Like money or patents."

Bartleby shook his head. "Look, can you invent... detective things?"

"I suppose." I didn't see any reason why not. I hadn't studied forensics per se, but it wouldn't take too long to study the available materials and come up with plans to improve upon them.

"Excellent. I've been out trying to line up some cases for us, so expect movers to be along to collect your things shortly."

"Well, you can't expect to run a detective agency out of Spitalfields?" Bartleby chuffed. "We'd never have any clients."

"I can't just pack up and move because you've got the urge to play detective."

"This isn't a game, James." He had his serious face on. "This is... its destiny. I've been at a loose end since, well, since returning to London. Playing the fop. Dandying about society."

"You quite enjoy dandying about, and don't you bother denying it."

He stepped close, clasping a hand on my shoulder. "It's what I know, James. And I need you with me on this. I need a partner."

I felt a strange flare of mixed animosity and resignation. He was right, of course. Wasting my hours away in an East End workshop fixing junked timepieces was a waste of my time, a waste of my life. I didn't know if detective work would be any more fulfilling, but it was bound to be more challenging. And the idea of moving my workshop to somewhere less prone to random street violence was appealing; I was tired of hurting the locals, but I just didn't think they were getting the message that my capacity for mayhem was greater than the value of the copper wire I possessed.

"Fine," I said. "But when we're settled, you'll respect the sanctity of my workshop. You don't barge in without my leave."

"Of course!" he said, raising his hands. "Your space is your own."