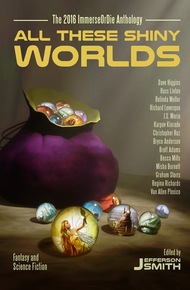 All These Shiny Worlds: The 2016 ImmerseOrDie Anthology edited by Jefferson Smith

What do you get when you ask 34 of today's top indie authors to each submit a story and then ask a team of ruthless judges to scour that ore and pick out the gems? You get All These Shiny Worlds: A world of today, divided black from white, good from evil, and held apart by the taste of a cookie. A world of griffons and glimmer bunnies, sassy llamas, and the magic of beer. A world of contemplation and serenity, of service and devotion, ruled by a jewel and guarded by children. Plus 12 more, for a total of 15 sparkling worlds to explore.

From the brutal curators at ImmerseOrDie.com comes this collection of indie short stories, each a distinct jewel forged in the fires of judgement, and each carrying that simple promise: Guaranteed not to suck.

Okay, by now you've probably heard how ImmerseOrDie works, so you already know that I get on my treadmill every morning and open a new indie novel, hoping it will keep me distracted from the monotony of my daily walk. You've heard that I do my best to stay immersed in the book, but that when my immersion fails, I make notes about what went wrong, and that if it happens three times before my journey is over, I close the book, write up a report about what happened and post it to my website.

But maybe you don't know that ImmerseOrDie is about more than simply pointing out problems in indie books. It's also about celebrating the really good ones. Folks may be drawn in to watch the fun as yet another novel hits a patch of ice and slides into the ditch at the side of my treadmill, but there's another thing I've noticed about the people watching.

They are equally delighted by the books that do make it.

So last year, I started a new component of ImmerseOrDie. Each time a book survived my forty-minute quick sniff test, I put it on a secret pile. Those books were then subjected to a second test: a full-length read. To my surprise, a lot of them went the distance on that round, too. Before I knew it I had nine great survivors, with both great production valuesand a great story.

That's when I approached the folks at StoryBundle and hit them with my proposal. Why not offer a bundle composed entirely of indie books—but ones that had been ruthlessly curated?

And so was born the ImmerseOrDie bundle, which I'm proud to say was so popular the first time we did it, in 2015, that we did again this year, and we'll probably do it again next year as well.

What's so exciting about these StoryBundles is that they don't just help readers find great new authors to fall in love with. They also give those authors a kind of exposure they've never had. For many of them, the three weeks they participate in the bundle brings them more readers (and more income) than any entire year they've experienced before.

And I find it very exciting to be part of that.

But we can do more. The lesson of the bundles is that when authors mingle their audiences, everybody wins. When each of us announces a group project in our newsletters and social media streams, fans who come for one author are suddenly exposed to the work of all the others as well.

Unfortunately, bundles only work for people who can pay a bit of money to buy the collection. It can be as little as just a couple of bucks to get all of them, but you do have to actually buy them, and some people don't want to risk money on a pile of books from nine authors they've never heard of, just to get a book from one who they do know.

Worse, some people may not be willing to tackle an entire novel by a writer they don't know.

So we hit on the idea of creating an anthology. The one you're holding in your hands right now, as a matter of fact. And then we set out to do two things that don't happen very often with indie anthologies. First, we set up a grueling selection process to ensure that only great stories got in. And then we figured out a way to give the whole thing away for free.

To deliver on the first point, we decided to stack the deck, and began by inviting only authors whose books had previously survived the ImmerseOrDie treadmill. Then we figured that strong authors are probably a decent judge of other authors, so we asked each of the survivors to nominate one more author who they thought "had game." This gave us a total of thirty-four authors in our pool, and to them we extended a simple invitation: hit us with your best short story. Not your newest. Not the one you've been having trouble placing elsewhere. Your best.

Some of those authors don't do short stories, some didn't have time, and one or two might have been intimidated by the process. But in the end, we received twenty-five submissions.

Then we gave each of the stories to a panel of three secret judges and told them to be ruthless.

By the time the screams had died away and all the blood rinsed from the upholstery, we were left with fifteen survivors. Just like ImmerseOrDie, but a higher-speed version, played with individual short stories rather than novels or entire collections. And every bit as grueling.

Then we ran the entire collection through two complete rounds of editing with professional editors, and now, at last, we place our polished words into your hot and eager hands.

We hope you like it. And if you do, please point all your friends at it. Why wouldn't you? You'll get all that cred for turning them on to some exciting new authors, and they get a great book absolutely free. Everybody wins: readers and authors alike.

And that's what ImmerseOrDie is all about.

So we've done our part. All that's left is for you to do yours. Happy reading.