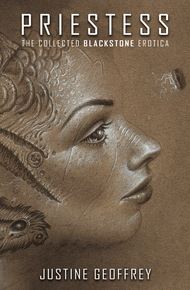 Justine Geoffrey is like nothing you can easily imagine. A world traveler, lecturer, and connoisseur of dark arts, she is becoming something more than human, and stopped identifying as anything other than an omnisexual being years ago. So, unless you're turned on by "the regular stuff" and glasses of water, atomic storms, or hot pics of barely legal teen dust mites, don't even bother. She'd probably eat you alive, mantis-style, if given the opportunity.