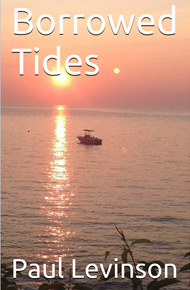 Paul Levinson, PhD, is Professor of Communication & Media Studies at Fordham University in NYC. His science fiction novels include The Silk Code (winner of Locus Award for Best First Science Fiction Novel of 1999), Borrowed Tides (2001), The Consciousness Plague (2002), The Pixel Eye (2003), The Plot To Save Socrates (2006), Unburning Alexandria (2013), and Chronica (2014) - the last three of which are also known as the Sierra Waters trilogy, and are historical fiction as well as science fiction. His stories and novels have been nominated for Hugo, Nebula, Sturgeon, Edgar, Prometheus, and Audie Awards. His nonfiction books, including The Soft Edge (1997), Digital McLuhan (1999), Realspace (2003), Cellphone (2004), New New Media (2009; 2nd edition, 2012), McLuhan in an Age of Social Media (2015), and Fake News in Real Context (2016), have been translated into twelve languages. He co-edited Touching the Face of the Cosmos: On the Intersection of Space Travel and Religion in 2016. He appears on CNN, MSNBC, Fox News, the Discovery Channel, National Geographic, the History Channel, NPR, and numerous TV and radio programs. His 1972 LP, Twice Upon a Rhyme, was re-issued in 2010. He was President of the Science Fiction and Fantasy Writers of America, 1998-2001. He reviews television in his InfiniteRegress.tv blog, and was listed in The Chronicle of Higher Education's "Top 10 Academic Twitterers" in 2009.

August 2016 brought news - real news, in our reality - that an Earth-like planet was discovered circling Proxima Centauri, the third star in the Alpha Centauri system, just over four light years from Earth. This is exactly what happens in Borrowed Tides, first published in hardcover in 2001, re-issued in Kindle this past April. It tells the story of the first starship to the Alpha Centauri system in 2029, employing a new technology which can move it through deep space at almost half the speed of light. But it requires an enormous amount of fuel, and can only carry enough for a one-way trip. A philosopher of science and his childhood friend, an anthropologist with a specialty in Native American culture, have a daringly bizarre plan, and talk the government into putting them in charge of the Light Through starship voyage.

Science fiction plays with ideas, and Levinson's novel is no exception, ranging across the board while folding back on itself like a möbius loop. Ingenious, broad-ranging, and engrossing, this novel by one of SFWA's former Presidents was an easy pick for the bundle. And with the recent discovery of a possible Earth-like planet around Proxima Centauri, a starship voyage from our solar system to the Alpha Centauri system is more relevant than ever. – Cat Rambo

The white birches and slender oaks were the corner's last stand. They fell in the Spring of 1964 to bulldozers and brusque men—a construction crew clearing the last of the lot on Bronx Park East for the high-rise that Aaron Schoenfeld would soon be inhabiting.

Aaron surveyed the rubble with mixed emotions. His apartment would have a terrace that jutted way out over the park—"a view straight to the Hudson," his father had been telling everyone. There would be two bathrooms—no more waiting for his sister to stop staring at her face in the mirror. He liked all that. But he didn't like what happened to the trees.

"The people who used to live here said there were moon spirits in those pale trees," a quiet voice said to Aaron. He turned to see a kid with burnt-brown eyes.

"People?" Aaron didn't usually have conversations with kids this young. The kid looked to be about ten or eleven, three or so years younger than Aaron. The kid sounded much older.

"Yeah, Indians," the kid said. "Years of Indian history are being wiped out here."

"How do you know there were Indians right here? I don't see any teepees."

Aaron was instantly sorry he'd said that. He could see the kid struggling with whether to walk away from him or share his secrets. And something about the kid's intensity made Aaron want to hear more.

The kid reached into his shirt pocket and pulled out a few pieces of chipped, flinty stone. "Arrowheads," he said, "made by the people whose main lands were in Pelham Bay. I found them right here."

"How'd you know to look here?" Aaron asked. "I mean, even before this construction, it was just a—"

"I could see the signs," the kid said. "I live right down the block." He pointed to a small semi-detached house, with a big off-white hibiscus in front that looked like it had been watered by every mutt in the neighborhood. "This place was my backyard. I spend a lot of time here."

"Did you tell anyone about the arrowheads?"

"Who'm I gonna tell?" The kid gestured to the construction crew, just about packed up and ready to leave for the day. "I tried to talk to the foreman once, but he laughed in my face. Why should anyone pay any attention to what I say?"

"Well, I am," Aaron said, surprising himself and extending his hand. "I'm Aaron Schoenfeld."

The kid shook it with a tight grip. "Jack Lumet." He smiled for the first time. Aaron could tell this was a rarity.

"The only reason you're even listening to me is that you're not much older than I am," Jack said.

"It's not that I'm against tall buildings or stuff like that," Jack said. "I just wish they could build these things where they don't hurt what's already here."

Aaron thought about the birches. He thought about a Spring afternoon years earlier, when he was four or five, and saw a crew building part of the Bronx River Parkway. He'd cried when he saw them blast away a field of buttercups.

"Don't worry—they'll plant new ones," his father had said.

But new ones—deliberately planted ones—weren't the same. They lacked something of wildflowers.

So Aaron understood that day what Jack Lumet was saying.

But he also knew that he was very much looking forward to seeing the Hudson from his terrace, looking forward to the clearer view of the stars that he imagined his new outpost would provide. And if his high-rise weren't built here, then where else? Everywhere you looked, there was something that people wanted to keep, didn't want to build over.

In the spring of 1964, wildflowers were still in long supply in the Bronx.