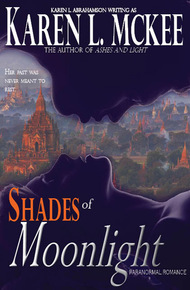 Author of the unique Cartographer Universe series, Karen L. Abrahamson writes poetry, short fiction, and fantasy, romance and mystery novels, as well as non-fiction for newspapers and magazines. In her words, "a bad day of writing is still better than the best day working for a living."

A born wanderer, she currently lives in the Metro Vancouver area of Canada with two Bengal cats who channel James Dean’s attitude. When she isn't writing she can be found with a camera and backpack in fabulous locations around the world.

To learn more about her, visit her website at www.karenlabrahamson.com.

When folklorist Kalla Jervis arrives in Burma as part of a team of archeologists researching the end of an ancient civilization she expects problems translating the ancient Burmese language. Then she meets her translator, tall, dark and dangerous Simon Renault, who both infuriates and attracts her. When dark dreams haunt Kalla’s nights, they hint at a terrible secret that entwines the fates of Kalla, Simon and all of Burma.

Karen L. McKee once again delivers a vivid story that evokes the mysteries of an exotic culture. Shades of Moonlight is a fantastic paranormal romance that wraps together past, present and future in one of the most mysterious of Asian cultures. Readers will love the fast-paced story of unforgettable characters caught in the strangeness of a world few westerners have visited.

As soon as I thought up the theme for this bundle, I knew this book had to be the “end cap” so to speak. Karen L. McKee (and her Karen L. Abrahamson fantasies) are riveting voyages rich with a culture not our own. I have known Karen as a friend for years and have been thrilled to be a part of her writing journey because I get to read so many of her amazing works before anyone else. Hers are tales that keep living in your memory long after you put them down. – M.L. Buchman

The massive temple was so different from mighty Shwedagon in Yangon. The gold-encased Shwedagon covered the peak of a hill and glowed warmly, welcoming the people circumambulating its base. The Shwedagon pagoda lifted its spire up and up and up to tiered umbrellas that glittered at the top.

The Dhammayangyi didn't glow in the sun. Instead it hunkered on the plain and seemed to inhale light. Its seven, dark-red, brick steps lifted into the air, each level with ornate lintels over empty doors and windows that seemed to suck at the sky. And ponder the two women.

Mei shivered, but Kalla seemed fine, just mesmerized by the size of the temple lifting so high against the blazing blue sky.

Then silently, disturbingly, Kalla stepped through the crumbling courtyard gate and stopped. The stiff way she moved made Mei reconsider her assessment.

No sign she heard. She seemed too intent on the place. Her face was too pale, and Mei wondered whether she should just grab the foreign woman's hand and get back to the hotel until Kalla was well.

But foreigners came to Burma and took—did—what they wanted.

The temple's huge main door yawned onto the courtyard where scrub grass and twisted trees grew amongst fallen mortar from the courtyard wall. Kalla's blank stare at the temple sent a shiver up Mei's spine.

"They say the king who built this temple demanded the bricks fit so tight together even a pin could not be pressed between them. Only the courtyard walls crumble."

Kalla nodded, but her gaze only rose to the corn-cob shaped finial at the top of the temple.

The little hairs at the back of Mei's neck stood on end.

"Kalla? Is everything alright?"

Kalla glanced at her then, and at last her gaze seemed alive, present. She smiled, but it was a puzzled smile.

"It's strange. There's something about this place. I have this weird sense I've been here before." She shook her head and her grin broadened in a way that eased Mei's concerns. "Probably just the fact I've visited other lost cities. After a while they all seem similar."

Kalla crossed her arms over her chest and cocked her hip, all foreigner now, all scientist in the considered gaze she gave the temple. Then she shivered.

"The darn breeze is cooler than I'd expected."

But Mei felt no breeze in the courtyard. There was only late morning sunlight reflected off grey soil.

Shadows shifted in the towering main door, and a skeletal old woman clad in pink nun's robes stepped out into sunlight. Her head—shaved bald—gleamed in the sun and her lips were stained red from betel.

She motioned for them to approach as she settled herself on a piece of white cloth she had spread at the edge of the doorway. Before her, on the cloth, lay a small display of incense sticks and chained marigolds for those who had forgotten to bring offerings.

The old woman grinned, revealing the red-stained teeth of the frequent betel user. Her eyes were the darkest Mei'd ever seen. She looked beyond the nun, into the darkness, and saw that the opening was a Buddha sanctum. Two standing Buddha figures waited. Perhaps, if she made offering, Buddha would protect them from the error she had made this morning.

"Are you, Daw Ma Ma Nang?" she asked in Burmese.

The old woman smoothed the white cloth under her marigolds. "I am her."

The old woman grinned her red grin again. "Is it not a good day to make offerings and meditate on the teachings of Buddha?"

Mei glanced over her shoulder. Kalla stood in the sunshine as if transfixed by the huge door, and her total stillness left Mei nervous.

"This is Daw Ma Ma Nang, Kalla." Mei used the honorific of Daw. "Shall I make your request?"

Kalla didn't even look at her. "Please."

"Just ask her." It was as if the darkness of the entrance held Kalla in place.

Mei turned back to the old woman and purchased a stick of incense. "My friend is a scientist from America. She is seeking old tales of the end of Pagan."

The old one's lined face cracked in a thousand wrinkles as she cackled. The sound echoed too loudly in the courtyard, but it seemed to break Kalla's concentration. She knelt in front of the nun.

"Please? I would like the stories. It's to help people all over the world."

Her face was so earnest Daw Ma Ma Nang must have seen as Mei translated. She nodded, patted the cloth beside her to indicate Kalla should sit beside her in the shade of the temple, but Kalla would not. Fear seemed to flood her features and suddenly Mei was uncertain of this nun.

Kalla glanced at Mei and then at the incense she held. "I'll wait here if you want to make an offering."

Kalla glanced at the sanctum and visibly shivered.

"I'm fine Mei. I've told you that." She tossed her head impatiently. "Now go make your offering and quit treating me like I'm an invalid. When you're finished we'll arrange a time to meet with her."

Reluctantly, Mei left them. She did not fully trust the nun, and checked over her shoulder as she entered the dim cave of the Pahto. Her concerns had to be unfounded. A nun took vows—in the ancient days, more vows than even the monks did. But there was something about Daw Ma Ma Nang and this place.

In the sanctum the two white Buddha figures—Gautama, the current Buddha, and Maitreya, the Buddha of the future —gazed impassively at her. Gold flake offerings decorated their hands and faces. The ground in front of them had been swept clean except for fresh marigolds and a single stick of incense trailing looping smoke up toward the high, shadowed ceiling.

Mei knelt and lit her incense stick, standing it in the small bowl provided for such things. Behind her, Daw Ma Ma Nang was talking excitedly to Kalla.

She focused on the Gautama Buddha, prayed he would listen to her, hear her words and help her.

But before she could begin, Kalla gave a small cry. It knocked the prayer right out of Mei's head.

She sprang up, turned, and found Daw Ma Ma Nang had hold of Kalla's hand. She sat frozen, blue eyes wide and black with fear.

Mei made the door as Kalla yanked to her feet and staggered back from the temple.

"What are you doing?" Mei demanded. "Can't you see you're frightening her."

So strange. So strange, when Kalla was the strong one. The foreign one. But Mei had failed Kalla—failed to protect.

Daw Ma Ma Nang's gaze had locked on Kalla, and the air in the courtyard had gone cold as if clouds covered the sun, but there were no clouds in the sky.

"Tell her—I am her friend," the old woman ordered, and automatically Mei slipped into translation. "Tell her I will tell her stories at my home tomorrow."

The old woman paused, chewed her lips for a moment, and the world seemed to pause as if awaiting her next words.

"Tell her I have waited for her for a very long time."