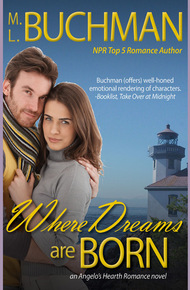 Where Dreams Are Born by M.L. Buchman

Cassidy Knowles knows what she wants. Or did until her father’s final gift. A calendar of lighthouses and a dozen letters; a final father-daughter journey to share. The letters from the past chart a new course to her future. A course that sails toward the one man she can’t stand. A man on his own calendar quest.

Can the old ships’ lights illuminate both their hearts?

This first book of my just concluded 5-book “Angelo’s Hearth” series came about when my wife gave me a calendar of a dozen Pacific Northwest lighthouses for Christmas. As we began our quest to visit each lighthouse, I pictured my hero and heroine—who had yet to meet—both having the same calendar, which their fates use to chart a course to true love. With or without their consent. – M.L. Buchman

"If you were still alive, you'd pay for this one, Daddy." The moment the words escaped her lips, Cassidy Knowles slapped a hand over her mouth to negate them, but it was too late.

The sharp wind took her words and threw them back into the trees, guilt and all. It might have stopped her, if it didn't make this the hundredth time she'd cursed him this morning.

She leaned in and forged her way downhill until the muddy path broke free from the mossy smell of the trees. Her Stuart Weitzman boots were long since soaked through, and now her feet were freezing. The two-inch heels had nearly flipped her into the mud a dozen different times.

Cassidy Knowles stared at the lighthouse. It perched upon a point of rock, tall and white, with its red roof as straight and snug as a prim bonnet. A narrow trail traced along the top of the breakwater leading to the lighthouse. The parking lot, much to her chagrin, was empty; six, beautiful, empty spaces.

"Sorry, ma'am," park rangers were always polite when telling you what you couldn't do. "The parking lot by the light is for physically-challenged visitors only. You'll have to park here. It is just a short walk to the lighthouse."

The fact that she was dressed for a nice afternoon lunch at Pike Place Market safe in Seattle's downtown rather than a blustery mile-long walk on the first day of the year didn't phase the ranger in the slightest.

Cassidy should have gone home, would have if it hadn't been for the letter stuffed deep in her pocket. So, instead of a tasty treat in a cozy deli, she'd buttoned the top button of her suede Bernardo jacket and headed down the trail. At least the promised rain had yet to arrive, so the jacket was only cold, not wet. The stylish cut had never been intended to fight off the bajillion mile-an-hour gusts that snapped it painfully against her legs. And her black leggings ranged about five layers short of tolerable and a far, far cry from warm.

At the lighthouse, any part of her that had been merely numb slipped right over to quick frozen. Leaning into the wind to stay upright, tears streaming from her eyes, she could think of a thing or two to tell her father despite his recent demise and her general feelings about the usefulness of upbraiding a dead man.

"What a stupid present!" her shout was torn word-by-word, syllable-by-syllable and sent flying back toward her nice warm car and the smug park ranger.

A calendar. He'd given her a stupid calendar of stupid lighthouses and a stupid letter to open at each stupid one. He'd been very insistent, made her promise. One she couldn't ignore. A deathbed promise.

Cassidy leaned grimly forward to start walking only to have the wind abruptly cease. She staggered, nearly planting her face on the pavement before another gust sent her crabbing sideways. With resolute force, she planted one foot after another until she'd crossed that absolutely vacant parking lot with its six empty spaces and staggered along the top of the breakwater to reach the lighthouse itself. No handicapped people crazy enough to come here New Year's morning. No people at all for that matter.

The building's wall was concrete, worn smooth by a thousand storms and a hundred coats of brilliant white paint. With the wind practically pinning her to the outside of the building, she peeked into one of the windows. The wind blew her hair about so that it beat on her eyes and mouth trying to simultaneously blind and choke her. With one hand, she smashed the unruly mass mostly to one side. With the other she shaded the dusty window. The cobwebbed glass revealed an equally unkempt interior. No lightkeeper sitting in his rocking chair before a merry fire. No smoking pipe. No lighthouse cat curled in his lap.

Some sort of a rusty engine not attached to anything. A bucket of old tools. A couple of paint cans.

A high wave crashed into the rocks with a thundering shudder that ran up through the heels of her boots and whipped a chill spray into the wind. Salt water on suede. Daddy now owed her a new coat as well.

Cassidy edged along the foundation until she found a calmer spot, a little windshadow behind the lighthouse where the wind chill ranked merely miserable rather than horrific on the suck-o-meter. Squatting down behind one of the breakwater's boulders helped a tiny bit more. She peeled off her thin leather gloves and blew against her fingertips to warm them enough so that they'd work. Once she'd regained some modicum of feeling, she pulled out the letter.

She couldn't feel his writing, though she ran her fingertips over it again and again. His Christmas present. A five-dollar calendar of Washington lighthouses from the hospital gift store and a dozen thin envelopes wrapped in a old x-ray folder with no ribbon, no paper.

In the end he'd foiled her final Christmas hunt. It had been her great yearly quest. The ultimate grail of childhood, finding the key present before Christmas morning. There was no present he could hide that she couldn't find. Not the Cabbage Patch Kid when she was six; the one she'd had to hold with her arm in a cast from falling off the kitchen stool she'd dragged into her father's closet. Not the used VW Rabbit he'd hidden out in the wine shed thinking that she never went there anymore. And she didn't, except for some reason the day before her eighteenth Christmas.

A part of her wanted to crumple the letter up and throw it into the sea. It was too soon. She didn't want to face the pain again.

The rest of her did what it supposed to do. The dutiful daughter opened the envelope and pinned the letter against her thigh so that she could read the slashing scrawl that was her father's. Even as weak with sickness as he must have been, it looked scribed in stone. His bold-stroke writing gave the words a force and strength just as his deep voice had once sounded strong enough to keep the world at bay for a little girl.