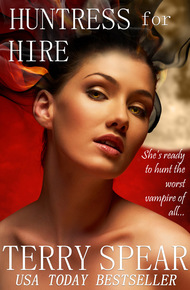 Bestselling and award-winning author Terry Spear has written over fifty paranormal romance novels and four medieval Highland historical romances. Her first werewolf romance, Heart of the Wolf, was named a 2008 Publishers Weekly’s Best Book of the Year, and her subsequent titles have garnered high praise and hit the USA Today bestseller list. A retired officer of the U.S. Army Reserves, Terry lives in Crawford, Texas, where she is working on her next werewolf romance, continuing her new series about shapeshifting jaguars, and having fun with her young adult novels. For more information, please visit www.terryspear.com, or follow her on Twitter. She is also on Facebook at . And on Wordpress at Terry Spear's Shifters

Huntress For Hire by Terry Spear

He's a hunter turned vampire, she's a huntress of vampires—he's needs her cooperation to free his family; she's trained to kill his kind. Rebel vampire huntress Rachael Bremerton wants revenge against Piaras, one of the most ruthless vampires in Dallas, for the murder of her parents. But when she's lured by another vampire, Adonis, into the darkness—the same darkness she's feared since she was a child—she's torn between her huntress sensibilities and some strange desire to be with the creature she's meant to despise and destroy. Adonis, a hunter turned vampire, has been ordered by Piaras to bring Rachel to him untouched. In return, Piaras will release Adonis's family unharmed. But when Adonis first sees Rachael, his hunter desire to have a huntress mate kicks in, or is it the dark heart of the vampire that makes him crave her so? Turning Rachel over to Piaras becomes less of an option. But can he find a way to free his family, claim Rachael for his own, and keep her family from discovering he is a hunter turned vampire—a creature they will all feel obligated to hunt down and kill?

I have yet to meet Terry Spear in person (also a USA Today bestseller), though we’ve conversed by e-mail for several years. But when I think intriguing paranormal—with a seriously hot love story and great writing—I think of Terry. When she offered me one of her vampire books to anchor the paranormal end of this series, I was thrilled and, uh, bit in. – M.L. Buchman

Like a stalker, Adonis studied Rachael when she exited her apartment wearing a red gown, cut provocatively low in the front, and having virtually no back, a black shawl hung over the crook of her arm as she hurried to his car. Her lips were coated in blood red lipstick that shimmered in the lamplights' soft glow.

His blood heated with envy. He didn't want any of the bachelor hunters seeing her dressed like that. He craved to hold her close and dance with her under the full moon to the enchanting gypsy rhapsody—to nuzzle his face against her soft skin, to drink in the subtle floral fragrance she wore that floated on the breeze. His longing to have her would be his undoing.

Even when he'd seized her and tried to drag her into the shadows outside of the ballroom, he couldn't help himself. Since he'd been turned, he'd been incomplete—not a hunter, and not totally a vampire, a being caught somewhere in between. But Rachael created an urge in him to recapture his humanity.

He cursed himself for his wayward thoughts and actions.

What made her so irresistibly appealing? Using her to kill Piaras had to remain his sole focus. Yet she blurred that focus—an enchantress is what she was—stimulating the hunter's craving to have her for his huntress mate. He cursed his weakness as she drove back to the ball.

Tonight, one way or another, he would lure her away from her kind and turn her world inside out through no choice of his own.

Twenty minutes later, Rachael crossed the parking lot to the hotel again, the air cool, but she decided not to bother with the wrap. Everyone could see the vampire's mark and know why she hated affairs like this. Nothing would chill her heated blood, as angry as she was about having to attend the ball. A few tendrils of unruly curls pulled loose from her hastily improvised bun, tickling her bare shoulders in the light breeze, and with annoyance, she brushed them away.

But then her anger shifted to morbid curiosity, and she glanced at the path leading into the dark behind the hotel. Did the man who had accosted her still lurk in the darkness? She considered the flagpoles. The flags had been taken down for the night. Taking a deep breath, she didn't smell any of the spicy scent that warned her the vampire was near. He was gone and a tinge of disappointment left her feeling abandoned. She chastised herself for the thought and focused again on the evening ahead—which she would cut short as soon as her uncle saw she was in attendance.

When she entered the ballroom, several males smiled appreciably at her attire, and her body warmed, despite being annoyed at herself for feeling anything but anger.

Uncle Tobias gave her a small smile and bowed his head. Yeah, Rachael had done his bidding, and he was damned pleased with himself, but she chided herself for not having more determination to stand her ground. She wished she could be like her cousin, Michael, the rogue. That's who she looked up to, a man who made his own decisions and wasn't ruled by his father, her uncle.

Needing a glass of champagne for fortification, she maneuvered through couples after the wine steward. Before she reached him, Gregory Devine walked in her path. The bachelor hunter had always kept his distance from her before tonight. What was his problem now?

"Would you care to dance with me?" Gregory asked, his voice somewhat demanding, but a hint of insecurity moderated his tone.

His sharp blue eyes took her in, his gaze quickly shifting to her breasts. He smiled. But then he looked at her scar, the raised white jagged line a reminder of the vampire who'd marked her and killed her parents.

She hated Gregory's changed expression—a flicker of...well, she wasn't sure whether it was pity, concern, or disgust—none of which she appreciated. She sidestepped him and headed for the wine steward.

Typical of a hunter, Gregory wouldn't let her go. He again walked into her path. He acted as though she was now seeking a lifelong mate—a big deal in hunter societies. The mating kept the hunter families from dying out. Because traditionally fewer females were born to a family, they were highly prized. But thankfully her uncle had discouraged hunters to pursue her before this, rumors abounding that her tragic loss had made her unsuitable for mating too early. Which suited her fine. At twenty-six, she was still free to pursue a hunting career when other women were busy raising their second or third child and had to abandon hunting altogether.

She glanced at her uncle, hoping that her brief show of attendance and wearing the gown her aunt had given her last year, would satisfy him enough to earn her the contract he was holding for her. But she didn't like the expression he wore, too serious, too much like the one he displayed when he was conducting business, not when he was socializing at the annual ball. He nodded to her.

Instantly, her blood heated. He couldn't...

She quickly looked around the room, saw the bachelor males appraising her, studying her actions as if they were on a hunt and this time she was the prey.

Her uncle was presenting her as eligible for marriage to the bachelors tonight? She could scream. Was this the family secret? No way was she getting tangled up with a hunter, not before she proved herself as a huntress and successfully rid herself of her fears. Rarely did the females hunt after they began to have babies.

When Gregory couldn't snag her interest, another bachelor approached her. He smiled at her and his green eyes sparkled with fascination. She frowned. How was she going to discourage the single men's interest in her without encouraging her uncle's wrath?

She caught sight of the wine steward disappearing into the sea of hunters and huntresses and smiled. "Whoever can get me a glass of champagne first, I'll dance with."

One dance and then she was out of here.

Hearing her challenge, five bachelors standing nearby, plus the two who had approached her, rushed for the wine steward. A scuffle ensued when two of the men struggled over the glass the steward tried to fill.

Despite the irritation running through her blood over the whole affair, she stifled the urge to laugh and shook her head. They acted like a bunch of bulls during rutting season.

But the glint of light outside on the balcony shimmered again, intriguing her despite how dark it was outside. She crossed the floor to the door, grabbed the handle, and jerked it up.

After stepping outside, she closed the door, shutting out all but the music that served as a romantic backdrop, and the soft light that filtered into the blackness from the ballroom chandeliers. But the rest of the balcony remained dark and foreboding. Instantly, the familiar fragrance of spice reached her, sending her system on high alert. Her heart beat erratically and her hands grew clammy.

The shiny object had faded into the darkness...the same kind of darkness she'd feared ever since she was a child, but was determined to conquer.

She remained frozen in the soft wash of light, not moving any closer to where the object had vanished. Yet a part of her wanted to explore the shadows, to seek out the source rather than let it come to her.

"Who are you?" she asked, her voice firm and demanding, trying to sound sure of herself but afraid her voice might have reflected her fear.

"You won't ever get to Piaras without my help."

At the sound of the deeply sexual, but deadly male voice hidden in the ebony gloom, her heart nearly stopped.