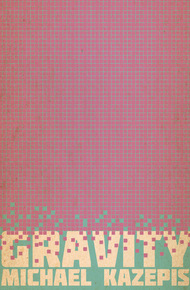 Michael Kazepis has lived between Europe and the United States, having worked as a tradesman, tour guide, retail slave, delivery driver, bartender, teletext operator, hostel receptionist, and nightwatchman. He is the author of the books Long Lost Dog Of It and Gravity. His work on Veterans: Faces of World War II has been featured in The New Yorker and Vocativ. In 2014, he launched King Shot Press, a micropublisher of radical books. He lives in Portland, Oregon.

Murderous revelation draws a photographer into the sinister heart of Athens. The sole survivor of a space-stranded cult faces oblivion at the seat of the universe. Balkan scavengers turn toward ancient ways to thrive in an apocalyptic wasteland. Flesh magic,'80s hardcore punk, immortal aliens. Chaotic detectives and black-gloved killers. In these stories that make up Gravity, Michael Kazepis explores the darkly surreal with raw immediacy.

Where Leona Pardi was murdered was on odos Apollonos, outside of an old bookshop that sold expensive rare editions. Pardi had been en route to her partner's home, a studio near Makriyianni on the collapsed side of the Parthenon. Approaching 0300, everything on the street was shuttered, revealing a series of intricate and sometimes profane or political graffiti murals you only saw in daylight on holidays. Her killer had stopped to admire the work.

When Pardi never arrived, the boyfriend was devastated. Her phone went straight to voicemail. He'd thought she was ignoring him. But when he didn't hear from her after several days, and it appeared no one had been to her place in some time, he went to the police. They contacted him days later after a Jane Doe matched the description.

He was the one that identified the body. Pardi had no immediate family, at least no one she'd told him about, anyway. She'd been stabbed forty-three times. That night he mourned, drinking in his third-floor apartment until he was unconscious—he'd planned to propose to her that week up in the mountains near Arachova, where they'd first met during a ski holiday.

Nearly six weeks later, the boyfriend, whose name was Quentin Marrast, was found in an abandoned construction site, one of many in the city suspended by archeological digs, after some passersby noticed the smell.

"This all seems obvious enough," said the naked detective, sitting alone in his office, scanning through photographs of the crime scenes.

Quentin's sister, Celia Marrast, arrived a week after their family was notified by the embassy. Enough time had passed that her brother's unclaimed body had been cremated. And the case was more or less cold. Their mother was too ill to make the trip, and in any event, might not have wanted to.

Back stateside she worked as a photographer. Mostly she chronicled weddings and staged portraits of young and still excited families or couples. But she dreamed of bigger subjects. Walking the streets and seeing so much to capture, she was kicking herself for having left her equipment on another continent. Still, at least she had her phone. She snapped photos of anything that caught her eye, which was much.

No one had heard from Quentin in years, like he'd simply dropped off after moving abroad. There'd been only a mailing address and the few postcards he'd sent her. However, this was understandable—there'd been something of a falling out, an argument between him and their mother. Neither ever revealing to Celia what it'd been over.

Marrast booked a bed at a hostel on odos Menandrou, locking what few things she'd brought in the cage beneath the bunk. She had a hard time sleeping in the room, with only another traveler's unmade bed as company.

The following morning Marrast met with her brother's landlord outside the building and he gave her the key to the apartment. Had he been flirting?—this infuriated her. Marrast told him she was surprised he hadn't already rented it out. The landlord, an older man in his fifties, said things moved slow here. He wiped sweat from his forehead with a handkerchief. "Well, let me know if you need any . . . help." But she shook her head. "The more you can take the better," he'd said.

She walked up the spiral stairwell to the apartment and found the place rifled through. The smell of mildew, hot stale air. Drawers pulled partway open and in some instances torn out entirely, papers and clothes scattered. Like thieves or the landlord or the police had ransacked it for valuables. She asked herself why she'd even come. There wasn't a body to mourn, not anymore, there really wasn't anything here for her at all. Maybe it was the late gesture, an attempt to know something about him as the man he'd become. To perhaps disentangle her from the idea of who he used to be. Marrast opened the windows to let everything breathe. She found bin liners in the kitchen and started to fill them with the most obvious trash. She began with the empty bottles and takeout bags on the counter. There was something about this which felt like peeling off a cooked layer. Marrast tied the bags and took them to the dumpster to drop them. She looked down the street, feeling she was being watched. . . . Marrast shook her head and reentered the building and climbed the stairs slowly. She walked around the apartment a while doing nothing else. Once she started to feel tired she stepped onto the balcony and sat on a wicker chair that was there. The balcony was the only part of the apartment where she felt at ease. Jetlag took hold. Soon she was dreaming of the building's ghosts.