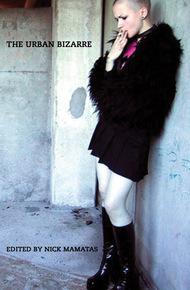 The Urban Bizarre brings together tales of the city from the best new science fiction writers, pornographers, and zinesters — stories too weird, too dark, and just plain too bizarre to be published elsewhere. Edited by the Bram Stoker Award-nominated author Nick Mamatas, and featuring stories by Charlie Jane Anders, Tim Pratt, Jeff Somers, and many more, The Urban Bizarre guarantees you'll never look at a cab driver or street corner in quite the same way again.

I can still remember when I moved to the city and found it a playground of all-night tattoo parlors and streets where sex kittens and cyber-pigeons cruised all-night rave-reveries. Somewhere around the third eviction or the tenth second-hand "you-gonna-finish-that?" meal, the city became a playground more like the ones I'd known in grade school, full of bullies and hazards. And that was before I started harvesting Sock-heads. After a few years of that job, they didn't call me Anxiety for nothing.

Who would come to my funeral, apart from other hustlers? I obsessed over whether dying would hurt, and whether the cops would solve my murder. And how could I die in a way that least inconvenienced taxpayers? I worried a lot about taxpayers, some of whom used to be my friends. If I ever paid taxes, I wouldn't want people like me to waste them.

Every day the city acted more hostile, like when the ATMs started dispensing only thousand dollar bills instead of five hundreds, and what was I supposed to do, empty my account each time I withdrew cash? The one human teller who still worked at my bank always looked nettles at me.

When I signed up for this gig, I figured it'd be plush. Just hang around with zonked out old people all day and listen to their hallucinations and slightly more believable reminiscences.

I never pictured myself on my hands and knees in a dingy cube-unit slicing open a fresh corpse's neck with his widow clinging to my back and screaming. I'd heard her screaming that her husband was dead from her window, and raced up there. Now her newly bereaved hands were around my throat.

"Get off my Lester, shit-finger!"

"Lady, it's not like I can hurt him or anything. He's already dead. I'll be gone in a sec. If you'll just—"

She was a wiry bitch, probably sexomatic back in the day. She dug claws into my jugular and squeezed. "Leave him alone—" as if I were the one who was assaulting someone.

I struggled to remember the class Haupter had taught on SS removal in thirty seconds or less. "Just like coring an apple. Plunge the cutter deep and describe an oval. You want to sever all the connections to the medulla in one go." It sounds easy, but try doing it with a crazed widow on your ass.

"Greetings and condolences, Mrs. Gerrold." The two-foot refrigerator at the cube's corner glowed and spewed out frozen air in the shape of a man in a top hat and dinner jacket. He fuzzed where the chill vapor hit air. "I represent the Wilkinson Mortuary Group, which sponsored your refrigerator."

"I'm here to discuss the funeral arrangements. You will of course desire the finest posthumous ornamentation, which can be yours at a generous discount."

I finally had the cutter in all the way. This was a messier job than usual. I had stuff I didn't want to think about all over my hands. I wondered for a second if Mr. Gerrold had really been dead when I started. I mean, the wife would have checked, right? I severed the main input connection, which left just two more to go. The widow Gerrold gripped a bread laser, the kind they give away with toasters.

I snatched away my hand just as Mrs. Gerrold stabbed. Her laser went right into the base of her husband's skull. Brains splattered her knee and my hand. I begged forgiveness until I heard sirens. The refrigerator vapor-holo was explaining that all of the damage Mrs. Gerrold was causing with her laser could be beautified for just a few thousand extra. I ran out on the street, the SS implant in my left fist, and kept running for half an hour.