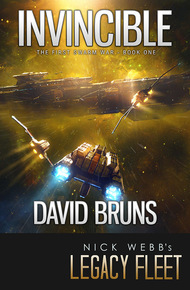 David Bruns is a former officer on a nuclear-powered submarine turned high-tech executive turned science fiction writer. He is the creator of the sci-fi/fantasy series, The Dream Guild Chronicles, and co-creator of The SynCorp Saga, a near-future sci-fi thriller series about the corporate takeover of our solar system. His short fiction has appeared in such speculative fiction anthologies as The Future Chronicles and Beyond the Stars and well as online magazines like Compelling Sci-Fi. David is also a 2017 graduate of the prestigious Clarion West Writers Workshop. In his spare time, he co-writes contemporary thrillers with a retired naval intelligence officer. Rules of Engagement, their next novel from St. Martin's Press, comes out in June 2019. Find out more at www.davidbruns.com.

The aliens took her ship. Commander Halsey wants it back.

For decades they were among us, silently infiltrating the power structures of society. Now the Swarm stands on Earth's doorstep. As humanity launches a desperate counter-attack, the alien victory seems inevitable.

But for Halsey, this is personal. While the Fleet executes their battle plan, she leads a do-or-die suicide strike at the heart of the alien force: her own Invincible, turned into a weapon against mankind. With a few Marines, a pirate ship, and an ex-lover by her side, Halsey fights to take back her command and save the human race—or die trying.

She is a proud warrior. She is humanity's last hope. She is Invincible.

Petty Officer Jon Olson stretched in his chair, stifling a yawn. Ninety more minutes, that's all that was left in his watch, just another fifty-four hundred seconds.

Cripes, even Lieutenant Hurley sounded bored, Olson thought. Did anyone really think the Russians or the Chinese would try something this far out of occupied space? There was no one out here. No. One. Except us.

"Commencing sensor sweep, sir," Olson said. Standard Fleet policy: come to a new heading, look for the bogeyman that was out there to get you.

The meta-space band jumped. More like hiccupped, actually. Odd. Olson zoomed in on the reading. The trace showed the normal scatter, then bam, a massive burst of quantum energy, like a cosmic burp. The meta-space long-range sensors probably needed recalibration.

Olson considered ignoring it. He could pretend he never saw it and let the next shift take care of the calibration. But . . . he was up for promotion to first-class petty officer next month, and a letter of recommendation from Lieutenant Hurley would be a really nice addition to his packet. Why not use this opportunity to reinforce to the lieutenant what a fine young sailor he really was?

Lieutenant Hurley's head swiveled toward Olson. The man's nostrils flared and his eyes burned with an unnatural light. "Go ahead, Sensors."

Olson shifted in his seat under the officer's glare. Dial the intensity back to eight, dude. We're on the backshift. He plastered a professional smile on his face. "Request permission to take the long-range sensors offline for a calibration. I'm getting a strange quantum fluctuation in the meta-space band."

"Aye-aye, sir." Olson spun in his chair, his fingers automatically stabbing the screen. The meta-space band on his display started pulsing with a square wave test pattern. He cracked his knuckles. He now had seventy-six—make that seventy-five—minutes until he was off duty. Minus thirty for the calibration and he might as well just call it a day and hit the showers now.

"You heard me, Ensign. Calibrate the transmit array. Now."

Hurley's tone hardened and Olson imagine the officer had dialed his visual intensity level on Brooks up to eleven. "Thank you for reminding me of Fleet regulations, Ensign. I have the captain's verbal permission to perform the maintenance."

Olson huffed. Fat chance of that. Captain Donaldson never did anything without writing it down first. The man was like a human paperwork volcano.

"Ensign!" Hurley chopped at the air with the flat of his hand. Brooks's mouth hung open. "Take the transmit array offline. Now."

From the corner of his eye, Olson could see the big red X flashing on her screen. Ensign Brooks's back was ramrod straight in her chair and the back of her neck was pink. Olson was glad he wasn't her roommate after this shift. That gal had some steam to vent.

His workstation trembled as if someone had jostled it. Odd. He placed his palm flat on the side of the panel. The faintest trace of a vibration tickled his skin.

Olson stabbed at the screen, stopping the calibration. "Sir," he said, sitting up in his chair, "I've got a physical vibration or something in the hull. Bringing the sensors back online."

"Leave them off, Olson." Hurley's voice was languid, not like his normal clipped tones.

"I said leave them off." Hurley had a faraway look in his eye as if listening to distant music. He smiled.

Olson could feel the vibration in the soles of his feet now. He went through the final steps to bring the sensors back online and then just gaped at the screen. All the readings were off-scale high, as if every instrument was screaming at him.

"Sir! I don't understand these readings. There's something out there!" Olson could hear his voice climbing through the octaves, but he didn't care. He could feel the humming sound all around him now, as if it had infected their very atmosphere. "Putting it on screen."

Whatever it was, it wasn't Russian or Chinese or even Caliphate. His sensors were pegged high, completely useless as a source of data. Olson gaped. They were huge, bigger than a Constitution-class carrier even. He turned to look at the watch officer for orders.

Lieutenant Hurley was standing now, his arms spread wide, with a smile of pure ecstasy on his lips. His head lolled back as if he was drunk.

The lift door behind Hurley opened and Captain Donaldson strode onto the bridge. His gray hair was askew and he wore a plain white T-shirt with his uniform trousers. He stopped when he saw the screen, and Olson saw his face go slack with shock.

But the Old Man recovered quickly. Donaldson took one look at Hurley, then started shouting at Ensign Brooks. Olson could barely hear him over the droning sound that permeated the bridge.

"Message to Fleet CENTCOM—" He saw the big red X flashing on the comms panel and the color drained from his face. He whirled on Hurley. "What have you done?" he screamed.

Olson looked back at the screen. The alien ships were so close that the computer had readjusted the magnification. A flicker of green lightning lanced out of the lead vessel.