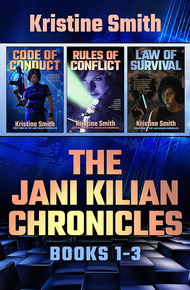 Code of Conduct: Jani Kilian has been on the run for 18 years. But when Interior Minister Evan van Reuter, her former lover, tracks her down and begs her help in finding his wife's killer, she has no choice but to agree.

Rules of Conflict: After eighteen years, Captain Jani Kilian's life as a fugitive has ended. Captured by the Service, she now faces court martial. It will surely lead to her execution. But relations with the idomeni have deteriorated. Jani's knowledge of that alien race and her friendship with Nema, their ambassador, earn her a reprieve. And if she is able to help stabilize the crisis, she may be in line for a pardon.

Law of Survival: Jani Kilian finally has her life under control. Discharged from the Service, she's become an important player in negotiations with the alien idomeni. But when a classified report containing revelations about past crimes comes to light, Jani realizes that old enemies still seek to destroy her.

From Code of Conduct:

Scrub and sand blurred past as Jani concentrated on the approaching tracking station. The squat building sat like an overturned bowl in the middle of the plain, its safety beacon shining gamely through the fog.

The steadying hand on her shoulder returned as the calmness reasserted itself. A survival checklist formed in her mind. What she had to do, how quickly, and how thoroughly. She hadn't always been that organized. The Service had literally drilled it into her head. Augmentation. The implants in her brain that had, at least officially, made her a soldier. Jani resented augie when she didn't need it, but gripped it like a life preserver now. As she neared the station, it kept her focused, compelled her to watch the shallow recesses in the dome, the dark shadows where someone could hide.

She circled the small dome twice before she edged the skimmer into its charge slot. Shooter at the ready, she carded through the station's two sets of doors and scanned the cell-like single room. Finding nothing out of place, she set the weapon on standby and tucked it into the belt of her coverall. Working with speed born of habit and dispassion born of chemistry, she packed her few clothes into her small duffel. Then she stripped the bed and bath area, feeding the flimsy sheets and towels into the trashzap. The volume of material overwhelmed the unit's filter; the odor of burnt cloth filled the room.

Jani rummaged through one of the side compartments of her duffel and carefully withdrew the small Naxin bomb. After the protein digester did its work, no trace of her presence, no hair, skin cell, or fingerprint, would remain. A second bomb nestled in her bag. She would use it on the skimmer after she reached the shuttleport.

Jani checked her timepiece. Shuttles to the NorthPort docks departed every half hour, but with the slowdown, there was no guarantee they'd follow their normal schedule. She sat on the narrow bed, bomb in hand. If this all turned out to be nothing, there would be hell to pay. Naxin lingered like bad memories—the station would require a thorough decontamination. Expensive decontamination. In other words, kiss this job good-bye.

But who knew? Maybe the desk clerk's friend with the Registry job would come to her aid. Jani smiled sadly. Who could guess the offer of a Registry job would hold enough attraction to make her drop her carefully maintained guard?

Someone who knew her well.

And who knows you that well, Captain Kilian?

She broke the seal on the protein bomb, set it on the mattress, and hurried toward the door. Within seconds, the device's outer housing would split, releasing a steady yellow stream of digestive mist.

Jani looked back at the bed. The protein bomb emitted a sound like cracking ice, releasing the first puffs of corrosive fog. Too late to hurl it out the door. A few good pulls of Naxin would turn her lungs to soup.

She let the station's inner door close behind her, backed against the narrow entryway wall, and forced the outer door to remain closed by pushing with her left foot against its raised metal frame. Then she reached up and shattered the casing of the overhead light with the grip of her shooter, plunging the small space into darkness. In the meantime, the barest whiff of Naxin had worked its way through the gaps in the inner door seal. Jani closed her eyes against the stinging mist and stifled a cough.

The alarm spoke again. "Approach is made."

She activated her shooter. After her visitor made a few attempts to force the door, she'd pull her foot away. Allow the door to open. Then wait for that first tentative step forward into the dark.

Oblique line of fire—aim for the head.

Jani heard the crunch of footsteps, a plastic click as someone inserted a card into the reader, silence as the jammed door forced the reader to deny access. Again, the click of the card. Once more, nothing.

That voice. Jani tensed as the outer door shook under the force of banging knocks.

Her calm cracked like the bomb housing. Oh God! Not him! She tightened her grip on her weapon. They wouldn't let him come here alone. Evan. Van Reuter. The Commonwealth Interior Minister. No security officer worth a damn would have allowed him to wander unescorted on any colony. His face had been plastered on the cover of every newssheet for weeks—even the most info-starved transport jockey would recognize him.

"Jani? Jani?" The banging resumed, louder, more insistent. The air in the tiny space shook with the noise. "I know you're in there! Talk to me!"

More Naxin had seeped into the enclosure, choking Jani's breath away as she tried to inhale. Her eyes burned. The skin of her face felt hot. She pulled her foot away from the door. It slid open, but she remained back in the shadows, letting the cold air pour over her.

At first, nothing. Then Evan van Reuter stepped forward. Almost twenty years had passed since Jani had seen that tall, slim form, that tilt of the head. Not as much of a stomach-clench as with the Haárin. Not quite. "Should I curtsy, Excellency?" she asked as she stepped out of the doorway, forcing him to backpedal.

"Jani?" He stared at her, broad brow furrowed in confusion. "Is that you?" Then his gaze fell on her shooter. Thin lips tensed in a tight line. Dark, hooded eyes narrowed. Jani could hear his thoughts as though he spoke them out loud. After so long, he was unsure of her. She almost felt flattered.