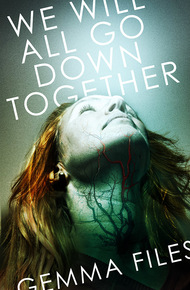 Gemma Files was born in London, England and raised in Toronto. Her story "The Emperor's Old Bones" won the 1999 International Horror Guild Award for Best Short Fiction. She has published two collections of short work (Kissing Carrion and The Worm in Every Heart, both Prime Books) and two chapbooks of poetry (Bent Under Night, from Sinnersphere Productions, and Dust Radio, from Kelp Queen Press). A Book of Tongues, her first Hexslinger novel, won the 2010 DarkScribe Magazine Black Quill Award for Small Press Chill, in both the Editors' and Readers' Choice categories. The two final Hexslinger novels, A Rope of Thorns and A Tree of Bones were published by ChiZine Publications in 2011 and 2012. We Will All Go Down Together followed in 2014, and the Shirley Jackson and Sunburst Award-winning Experimental Film came out in 2015.

We Will All Go Down Together by Gemma Files

EVERY FAMILY HAS ITS MONSTERS . . . AND SOME ARE NOTHING BUT.

Devize, Glouwer, Rusk, Druir, Roke—these are the clans who make up the notorious Five-Family Coven. This alliance of witches, changelings, and sorcerers once sought to recreate the Earth in their own image, thwarted at the last only by treachery that sent half of them to be burned alive. Now, four hundred years later, the Coven's last descendants—psychics, ex-possessees, defrocked changeling priests, shamans for hire, body-stealing witches, and monster-slaying nuns—the bastard children of a thousand evil angels—are assembling for a final confrontation.

"Badness me!" as Madam Mumblechook of Endor College was wont to say (in Mary Stewart's The Little Broomstick)—and which seems like the perfect tag line to Gemma's interconnected stories of bad fairies, witches and odd . . . things . . . that inhabit her neck of the woods. These are the tales of the Five-Family Coven—emigrees from the Old World now residing Under the Hill in the New World. And still causing mayhem of course. Shirley Jackson Award-winner Gemma doesn't lull you into a 100-year sleep—she knocks you flat out with the power of her words. And yes. There really are monster-killing nuns. I promise. – Sandra Kasturi

The Five: A Warning to the Curious

Every story is made of stories, and all of those collected here trace back to one begun long before, in another country, another century. It tells of how five people, each of whom represented part of the same cursed lineage—the bastard seed of a thousand evil angels, thrown down on rocky soil and left to grow unchecked, breeding a secret poisoned treasure of supernatural power in its unlucky inheritors—met for fell purposes, swearing together to carry out a great and secret work which would rock the very world to its core. Branded as monsters and persecuted by those who considered them impure, damned,

contaminating, they allied together only to split each from each along lines carved by privilege, for two of them were noble, three not. And so the fated break ensued, inevitably: when betrayal struck, the rich and moneyed escaped "justice," or King and Church's notion of it, while the poor and low suffered its full extent.

Yet no one who tells this first tale debates whether or not all its protagonists deserved equally to die for what they did, or planned to do, in their way . . . all are considered equally guilty, even by the

surviving descendants of these fabled five, carriers of their bad blood and worse history alike. And so it remains a legend strange things tell each other, a bedtime fable recited by monsters, to monsters; its long shadow falls over all subsequent stories, staining them in shades of pitch-black smoke and hellish flame, lending them a stench of blown ash and bone-grit. While always those who begin it do so with these same words, unfailingly—

Listen now, my darling; lean closer still, and I will speak in hushed voice of the Five-Family Coven, who dared all only to lose all, whose infamous names will surely live forever. They of the line of Glouwer, of Devize, of Rusk, witches and witch-children, of whom none are spared. They who bear

either the name Druir or that of Sidderstane, who dwell forever trapped in Dourvale's twilight, outcast from two worlds and citizens of none. They who once held the title of Roke, wizards and warlocks of high renown, who bent the elements to their will and learned the names of every creature more

awful than themselves, if only so that they might bend them to their will.

Here is where things start, always—the bone beneath the stone, the great tap-root. The hole which goes down and down. That old, cold shadow, always waxing, never waning. That taste, so bitter in the back of your mouth, which almost seems to echo the tang of your own blood. Perhaps you recognize their names, now—catch in their descriptions just the faintest possible echo of someone you suspect, someone you yearn towards without knowing why, someone you love yet fear, or fear

to love. Of yourself, even. And perhaps this resonance, like some tiny bell's distant toll, makes you suddenly wish to know more. Well, then: you are in luck, of a kind, for here you hold a book which

can answer all relevant questions if only asked properly, just waiting for your touch upon its covers. Do so, therefore; open it to you, yourself to it. Breathe deep the dust of its pages, scrape some ink, take samples of its pulp. Or simply plunge in unprepared, risking nothing but your own ignorance . . . a hazard surely easy enough to gamble without much caution, even without knowing what else might really be at stake . . .