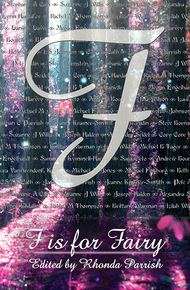 Rhonda is the editor of several anthologies including, most recently, Fire: Demons, Dragons and Djinn and Tesseracts: Nevertheless.

In addition, Rhonda is a writer whose work has been in publications such as Tesseracts 17: Speculating Canada from Coast to Coast and Imaginarium: The Best Canadian Speculative Writing (2012 & 2015). Most recently she co-authored a paranormal non-fiction book, Haunted Hospitals, with Mark Leslie and her YA Thriller, Hollow, is forthcoming from Tyche Books.

F is for Fairy edited by Rhonda Parrish

"Anyone who believes that faeries are wee, golden-haired creatures with dragon-fly wings and sweet intentions has never met a real faerie." –Suzanne Willis, "A Silver Thread Between Worlds"

Retellings of familiar favourites from new perspectives, and brand new stories share the pages of this fairy-themed collection. Within these offerings you'll find fairy music and food, contracts (making and breaking them), changelings, circles and curses–these stories deliver all the things you already love about fairies and a few new tricks as well.

A dusting of dragons, shapeshifters and ogres accompany these tales which include feminist fairies overcoming trauma, Norse fairies breaking the rules to interfere in human affairs, intergalactic fairies hitching a ride to a new home, political satire featuring an idiot king and talking animals, a new Robin Archer story, fairy run nightclubs and so, so much more.

I like Rhonda's own writing and her sensibilities, so when I asked her if she had any books about bad fairies and she said, "Actually . . . I just edited a book which is pretty much exactly that," it really did seem like a serendipitous bit of real-world magic. There's something in this collection for everyone—twenty-six brand new tales (one for each letter of the alphabet): curses, spells, dragons, ogres, talking animals, changelings, you name it. – Sandra Kasturi

From "H" by Suzanne J. Willis:

Anyone who believes that faeries are wee, golden-haired creatures with dragon-fly wings and sweet intentions has never met a real faerie. Never crossed the borders, or pushed through the back of the cupboard, or crawled through a strange, crooked doorway in the base of an old tree, into the realm where the fae live. If they had, they would know what real faeries are; the hags and the dragon tamers, the goblin-children and wind riders. The Heart Keeper.

Of course, you don't have to cross anywhere to find the Heart Keeper. She and her ilk are still criss-crossing from their lands into ours. Human hearts are far too tempting for them to stay put and wait for the brave, the silly, the lucky and the believers to seek them out. Oh, not the organ of muscle and ventricles and electric impulses that keep our fragile bodies going. No, it's much more gruesome than that. Their taste runs to real hearts, where we keep our desires and fears and love. Strange things they are, too, and each one a different shape and size depending upon its owner.

Whatever their measure, they all beat in the same manner. Like burning wood, alight from within, red and white heat moving through them in shifting light. Sparks find their way out, here and there; flames shoot out from the scars of old wounds, licking at the cold air.

These were things that I knew, knowledge that had reached for me across the borders, long before I found myself before the hearth of the Heart Keeper, looking for my own heart that she had stolen from me years before.

Marrying Oberon was not, perhaps, my best idea, but it certainly was not my worst.

With his rings on my fingers, I am undisputed Queen. Of course, I was a queen before we wed. Twelve ladies attended me, washing my feet and face in dew with a trace of honey each morning and night. They dressed me in wisteria petals threaded with cobwebs and crowned me with dandelions and honeysuckle vines. My lands teemed with deer and hare, black bears and white mice, and every morning tasted like spring and the evenings, like autumn.

In this idyllic kingdom, I was proud and happy and could do as I pleased. I could walk the woods when I wanted, eat nectar at noon and roasted chestnuts at midnight. I could bed whomever I wished to have and who wished to have me. But I was beleaguered. To the east, dark-eyed sídhe, emboldened by their youth and beauty, stalked the borders of my woods, preying on my mortals with songs and screams. To the west, oceanids pushed their salty tides against my trees, urging their sea to swallow my forest whole. Sometimes, rebellions boiled up through the dirt under my feet, and I'd spend interminable days and nights searing the earth to free it of goblins. Of course, I was always the victor: my blood runs at the same speed at the rivers, the wind in the sunflowers mimics the cadence of my breath. But still, such petty exertions do become exhausting.

In this way, I met Oberon.

It is not a romantic story. When people ask him, he tells them he found me in the ruins of my own castle, that he kissed me into waking after one hundred years of ensorcelled dreams. Or he might say that he rescued me from a dragon, or a snake. Once, I heard him tell that I was the snake, and that when he cut off my head, the curse was broken and I threw myself, whole and unyielding, into his arms.

I let him tell what tales he will, for I have my own.

From "W" by Laura VanArendonk Baugh:

I grabbed a to-go box from the nearby stash for the remains of my tenderloin and headed for the back door.

There was a man at the last table, reclining in the booth seat like Jeff Goldblum in a centerfold for PlayDino. I automatically avoided his eyes and then instinct jerked my attention back to him. I stopped mid-stride and stared, without any shred of his cool collection.

"Hello, Robin," he drawled, smiling like a cat with three fish at the bottom of a very shallow barrel.

He would eat my discomfort like candy, so I shut my mouth, took a breath, and tried to articulate a coherent sentence. "Puck."

His smile flickered—that wasn't his preferred name these days—and he straightened in the booth. "I've been waiting for you."

"Back in a minute," I said, and I started forward again as if I'd been heading for the restrooms.

He snorted. "Which one do you use?"

It could have been a simple question, but from him it wasn't, and from him it stung more. I didn't answer and kept going, eyes on the first door, hitting it hard. It was locked, and my palms thumped hollowly. A male voice inside growled, "In a minute!"

I went on to the next and pushed the unlocked door open. I went immediately in, but not fast enough to escape his, "Well, I guess that's an advantage, anyway."

I locked the door and leaned against it, ignoring the aged toilet.

What was he even doing here? No, that didn't matter, not first. First was checking escape routes. But there was just one door to the toilet, and opening a portal would only leave me exhausted in the Twilight Lands, where he could just step across and find me helpless.

Using the back door would take me right past him, and then he could follow me into the back lot where we would be mostly unobserved. Better to face him in the human Steer and Beer, where he had to play it low key.