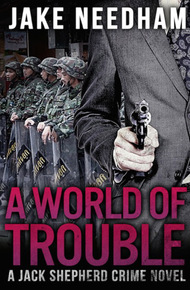 Jake Needham is an American screen and television writer who began writing crime and spy thrillers when he realized he didn't really like movies and television very much.

Mr. Needham has lived and worked in Hong Kong, Singapore, and Thailand for nearly twenty-five years. He is a lawyer by education and has held a number of significant positions in both the public and private sectors where he took part in a lengthy list of international operations he has absolutely no intention of telling you anything about.

He, his wife, and their two sons now divide their time between homes in Bangkok, New York, and Virginia.

A World of Trouble by Jake Needham

Jack Shepherd was sick of Washington politics, sick of corporate law, and even a little sick of himself. So he hit the road looking for a new start, made a couple of wrong turns, and somehow wound up in Hong Kong. Now he needs a job, and being General Chalerm Kitnarock’s lawyer is a job, so he takes it.

Shepherd could certainly have done a lot worse for himself. Charlie Kitnarok is the world’s ninety-eighth richest man. He rules an international corporate empire and controls billions in personal assets. But he’s also a former prime minister of Thailand now living in exile in Dubai. When he’s not making money, he’s plotting his return to political power.

For Shepherd, that could be a real problem. Thailand already has a prime minister, and she's a woman with whom Shepherd once had a brief relationship. It will get particularly messy if, as Shepherd suspects, Charlie is smuggling arms to his supporters and intends to use the Thai army to seize control of the country. Can Shepherd keep his two friends from destroying each other and prevent Thailand from sliding into chaos?

Thailand is hurtling closer and closer to a bloody civil war. And as unlikely as it may sound, Jack Shepherd is just about the only person on earth who can stop it.

First and foremost, Jake Needham posses the best bio pic and second name in the history of writers. But more than that, he’s a writer I have admired for a long time. His novel, A World of Trouble was perfect for this bundle. Full of international intrigue with a razor sharp lead. – Paul O'Brien

That's what they told me.

Of course, I figure it's mostly crap. If I don't start talking pretty soon, telling them what they want to hear, they'll haul me out to a little room somewhere in the back and beat the shit out of me.

So let's get one thing straight right now. Before they come back.

I am not who they say I am. I am not a criminal, not a spy, certainly not an assassin. I am not any of those things.

There is a pathetic air to that claim. I understand that. And it is something that embarrasses me. But nevertheless it is the truth, so I say it whenever they ask why I did what I did. At least, I think it is the truth. I am not absolutely certain I know what the truth actually is anymore.

Five years ago I was a high-flying lawyer in Washington, D.C., well enough connected to the masters of the universe to occasionally lunch at the White House mess. Three years ago, for reasons I will skip over now, I left the United States to become a professor of international business at Bangkok's Chulalongkorn University. It was not long before I had a beautiful Italian-born girlfriend, a woman who would later become my wife, and together Anita and I moved into one of Bangkok's toniest apartment buildings.

That was when I really hit my stride. Half the companies in Asia seemed to want an American academic on their board of directors. Particularly one with connections in Washington who had been publicly hailed as an expert in international finance and money laundering. There was money and there was prestige. There were private jets and there were suites at famous hotels. There was, let's face it, ego stroking on an international scale. It was like a blow job that never stopped. It was a great time. The best.

Today, on the other hand, is not a great time. Not the best.

I am no longer a professor of anything. I am no longer on anyone's board of directors or taking meetings with those good corporate citizens who were lined up outside my office door just a few months ago. I was a reluctant player in a little drama with an international fugitive just slightly less notorious than O.J. Simpson, one who thought I was his ticket to a White House pardon, and I attracted a lot of attention. All of it bad.

And that, as they say, was that.

I earn my living these days practicing law again. Or at least that is what I say when someone asks me what I am doing since I have no better answer. I work by myself in a one-room office in Hong Kong that is above a noodle shop. I live alone in a borrowed apartment. And I have absolutely no idea where, or with who, Anita may be anymore. There's a pattern there, but it's one I try not to dwell on.

In order to convince myself I was really a lawyer again, I had to have at least one client, of course. I had known Charlie for a while and he offered to become my first client and I took him on gratefully, without a second thought. It was just that simple. It never once occurred to me back then that having Charlie for a client would lead me straight to where I am today, sitting here in this chair, waiting for the FBI goons to come back and say what is to become of me.

The problem is where to start. This is a story with a lot of beginnings. Sadly, it still has only one ending. All the same, I must begin somewhere, so I will do so here.

On a gloomy day in January in, of all places, Dubai, a tiny city-state in the United Arab Emirates perched on the edge of the Persian Gulf.

Just before dawn that morning a brief but furious storm had rolled in from the desert and left the whole city smelling like a roll of aluminum foil.

My name is Jack Shepherd.

And that may be the last thing I tell you of which I am completely and absolutely certain.