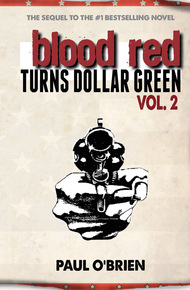 1972 and DANNO GARLAND stands atop the wrestling business. After years of planning, backstabbing and shady handshakes, he controls the World Heavyweight Champion and most of the territories where he can wrestle. In Danno’s business, the man who controls the Champion controls the money and the power that goes with that honor.

Battle after battle and DANNO'S finally made it to the top of his closely guarded, cash business.

And it means absolutely nothing.

Not now. Not anymore. Not since he was informed of what happened in that small hotel room in Texas.

LENNY LONG has just skipped out on DANNO'S territory for a different life with his family. After spending too long on the road he wants to re-introduce himself to his young children. But before he can truly settle out west, he needs to make things right in New York.

And he’s going to do it by returning a bag full of money to its rightful owner. A move that lands LENNY in the middle of a bloody clash to protect the secrecy, and the continued survival of the longest con in American history.

Problem is, they’re now trying to protect it from DANNO GARLAND.

The next day. Four days after the murder.

The NYPD was down, riddled with systematic corruption and continually fending off accusations of crooked behavior. For many years the dysfunction was a private, dirty little secret, but now it was so well known that even Hollywood had begun to make movies about it.

It was an organization that was rotten from the top down. It was like an old boy's club that made false arrests, fabricated evidence, engaged in racketeering, beatings, bribery and even attempted murder.

The NYPD was a festering wound down the middle of a dying city.

Nestor Chapman tapped lightly on the one door in the world he hated entering. Even before the new guy showed up, Nestor hated that door.

"Come in," called the voice from inside.

Nestor turned the handle and walked sheepishly into the captain's office.

"Have a seat," Captain Miller said.

The captain reminded Nestor more of a doctor than a captain. He was near retirement, long and lean, and had a perfectly shiny bald head.

Nestor sat and tried to assess the situation. He had been in Miller's company a few times since Miller arrived from Brooklyn, but never on his own. He very much liked it that way.

"Did anyone ever tell Cooper that he types like a fucking retard?" the captain asked as he tried to make sense of a report on his desk.

Nestor smiled and nodded in league with his boss. The captain closed over his folder and focused solely on Nestor.

"Tell me what you know about Danno Garland," the captain said frankly.

Somewhere in his head, Nestor had been waiting for that question but when it came it still disarmed him a little.

"Well," he started. "Not much. He's a promoter here in the city. Across the north-east here.

Wrestling. Or professional wrestling. Seems to have made some real money over the last few years judging by his... the way he lives now. I ... I ... he's ... low to the ground. Doesn't cause trouble. I don't know."

Miller watched Nestor's face very carefully. He leaned back in his creaky chair and thought for a second before following up.

"You've been following Troy Bartlett for a number of months," said the captain, making his words both a question and a statement.

Nestor nodded. He too leaned back and tried to make himself look less guilty of something.

"And this man, Troy Bartlett, is Danno Garland's lawyer?" the captain asked.

Nestor shrugged his shoulders and adjusted his body some more.

"And Danno's name never comes up when you're digging on this other guy?" Captain Miller asked.

"He does something for Garland but there's never been anything we could move in on. I'm interested in Bartlett for different matters. Missing monies. Shady practices. That kind of thing."

The captain again disconnected from the conversation to think. Nestor had heard how shrewd Miller was and how he played a tight game in terms of strategy. Such talents around this particular topic made Nestor anxious.

"Is there something?..." Nestor let his sentence trail off. He wanted to know what this was about but didn't want to ask directly. He knew that a high rank wasn't fishing around for nothing.

Captain Miller leaned into his desk and looked Nestor straight in the face. "I've got a US Senator who was stabbed in both legs a few blocks from here. I'm sure you've heard by now. It's everywhere. My goddamn wife has called me 10 times today to tell me it's on the radio and the TV."

"Yeah, I heard. Hell of a thing," Nestor answered, trying to sound sympathetic.

"Yeah well, the senator says he doesn't know what happened. He gets a lot of crazies, he says. Could have been anyone. He's calling for more money from the federal government for policing."

Nestor nodded accordingly. "This city is ... everyone who goes out there is on their own," Nestor replied, sounding totally unaware of his responsibility.

"Well, we might have something to do with that. Don't you think?" the captain asked.

Nestor realized how stupid his answer was. He wanted to get the conversation back on track. "What makes you think Garland had anything to do with it?"

The captain stood up and walked to the mesh-covered window. "When the news broke, I personally got a call from the head of the Athletic Commission. He comes down here to our boxing club. Maybe you've seen him around. Melvin Pritchard? Anyways, he says that the Senator, just before he was attacked, was scheduled to bring Garland before a committee on match fixing or some such nonsense."

Miller turned back from the window slowly and rested his hand against the wall.

"I didn't know that," Nestor lied.

"US Senators don't get stabbed on the street in the United States of America. Not even in this fucking city. I just need to know whether I should chase this wrestling guy or discount him and move on. ‘Cause someone is gonna notice ... "

The captain stopped himself.

And there it was, Nestor thought. The money shot. The reason he was called in at all. A high ranking politician with a national profile gets knifed on the street and someone is either getting squashed for mishandling it or highly rewarded for fixing it. There had been talk around the department of the First and Fourth precincts being amalgamated under one roof. No police house in the whole of New York had two captains.

Nestor thought that Miller was fixing to move up the chain.

"This police force can't afford another high profile fuck up," the captain said. "If they're going to make another movie about us ... it's gotta be ... we've ... we're the good fucking guys you understand?"

Nestor nodded in agreement. Captain Miller looked at his detective and couldn't decide on him one way or the other.

"I've ordered some officers to go out and shake a few bushes. Make a few inquires into this Garland person."

"Just so you know," the captain said.

"Okay," Nestor answered, not quite knowing what he should say.

"I've asked every cop in this building to bring me what they know about Danno Garland." The captain sat back down and lifted his pen, ready. "So you have nothing to tell me in this regard at this time?"

Nestor shook his head. "Not at this time," he said.

Nestor sat easy even though he felt like bursting out the door and running to his car. He knew he needed to stay ahead of what was coming.

Luckily he had already started.