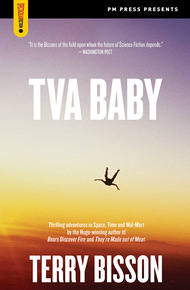 Terry Bisson, who was for many years a Kentuckian living in New York City, is now a New Yorker living in California. In addition to his Hugo and Nebula award winning science fiction, he has written biographies of Mumia Abu-Jamal and Nat Turner. He is also the host of a popular San Francisco reading series (SFinSF) and the Editor of PM's new Outspoken Authors pocketbook series. He lives in Oakland and rides a KLR650.

Beginning with a harrowing, high-speed ride through the Upper South (a TVA baby is a good ol' boy with a Yankee father and a 12-gauge) and ending in a desperate search through New Orleans graveyards for Darwin's doomsday machine ("Charlie's Angels"), Terry Bisson's newest collection of short stories covers all the territory between—from his droll faux-FAQ's done for Britain's Science magazine, to the most seductive of his Playboy fantasies ("Private Eye"), to an eerie dreamlike evocation of the 9/11 that might have been ("A Perfect Day"). On the way we meet up with Somali Pirates, a perfect-crime appliance (via Paypal) and a visitor from Atlantis who just wants a burger with fries, please.

Readers who like cigarettes, lost continents, cars, lingerie, or the Future will be delighted. For those who don't, there's always Reality TV.

Terry Bisson is one of science fiction great satirists. In TVA Baby, Bisson, who is a TVA baby, will help you build your own boyfriend, introduce you to a very non-super team of superheroes, and even rewrite the infamous morning of September 11, 2001. – Nick Mamatas

I'm a TVA baby. My father was a Yankee, from Michigan I think, one of those educated engineers who came down here to dam up the rivers and bring electric lights and indoor plumbing to the bedarkened South: FDR's potlatch. Then they all went off to the War and some returned and others didn't. It's Destiny that decides such things.

I fly a lot. I slept through the takeoff from Nashville and woke up just in time to hear the man in the seat next to me say, "There's the Mississippi, Ned."

"Ned," the Ned he was talking to, was a boy of about eight in the window seat. I was in the aisle seat. I looked over them both, out the little oval window, and saw a long lake laid out like a coonskin, running north and south, with skinny legs of muddy water extending east and west.

"That's Kentucky Lake," I said. "Or Barkley, not the Mississippi."

"Kentucky Lake is the Tennessee River," I said, "dammed up by TVA. Barkley Lake is the Cumberland. Both run into the Ohio here, only twenty miles apart. We're still a hundred miles east of the Mississippi."

"Some nosy A-hole," said the man. He was about forty with a flattop and an Opryland T-shirt.

"I was just trying to be helpful," I said. "You got it wrong. It's against the law to mislead children!" It should be, anyway.

"Can I help?" asked the stewardess. "Please don't shout."

"Sorry," I said. I almost never shout. "I'm a TVA baby. This ignoramus in the middle seat is so ignorant that he thinks Kentucky Lake is the Mississippi River!"

"I am a Lieutenant Commander in the US Navy," he said. "On vacation, and I do believe I know a lake from a river."

"I can see how one could make that mistake," I said. Though I couldn't help adding: "Though I am dismayed to learn that a U.S. naval officer could be so ignorant as to the geographic layout of the country he is supposedly supposed to defend."

I hear that a lot. I wanted to kill him. I usually carry a gun for just such occasions, but they are no longer allowed on commercial flights, so I rammed the heel of my hand upward, into his nose and drove the bone into his brain, such as it was.

Well, then, all hell broke loose. So to speak. First of all, there was the blood; you hardly ever see blood on a commercial flight. And then he was making this honking noise, trying to breathe and spraying blood all over the magazines in the seat pocket, and the back of the seat as well. Then he jerked once and died, but it was too late. All the other passengers were standing up, trying to get out of their seats, which are all jammed together, economy class wise, so it was like a little mini-riot. And here was the stewardess, excuse me, flight attendant, back again.

"Sir, sir," she was saying, meaning, of course, me. One only gets called "sir" by cops and such, so I got alarmed. Sureenough, there was a big guy behind me, trying to grab my arms and waving plastic handcuffs.

You can imagine the chaos. I figured it was time to split. The big guy wasn't so big with a fork in his carotid; even a plastic fork will do if you know how to wield it. I jammed him face down between the seats to bleed out and grabbed the gun out his ankle holster, and there's nothing like a gun, even a little one, to cool things out. It's like waving a magic wand. Everybody got real quiet.

Even the kid was quiet. The "Ned." He was watching me like a hawk or maybe an owl, all owl-eyed.

The gun was a big help. I used it to direct the attendant to the back of the plane. The aisle was clear. Everybody was sitting down again, watching me. I stopped on the way to get my carry-on out of the overhead.

"Open it," I said, pointing with the gun at the Emergency Exit door. They're good for pointing.

"Not not not allowed," she said with a combination of words and almost illegible (is that the word?) gestures, but I wasn't about to take no for an answer. Only authorized personnel are allowed to operate Emergency Exits, so I made her pull the big handle Out, then Up (as instructed by the decal).

It opened with a big "whoosh" that ripped the door right off, no surprise: it's windy out there at 500+ mph. She was still holding on, so she went with it, spinning like a top. Anybody could see everything up that short dress. Meanwhile, the kid had left his seat and was holding onto my leg as if he were trying to tackle me, for dear life, so he went with me when I dove out after her.

He was wearing an Opryland T-shirt like his "dad" and trying to bite me, so I shook him off. He could have stayed in his seat, and should have, but he didn't. We fell side by side for a minute or so (or so it seemed; it was probably less) with him reaching out for something to grab, while I unzipped my carry-on, and then he was gone.