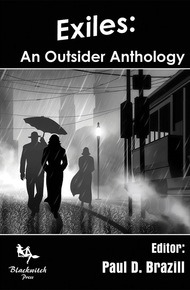 Paul D. Brazill is the author of A Case Of Noir, Guns Of Brixton and Roman Dalton - Werewolf PI. He was born in England and lives in Poland. His writing has been translated into Italian and Slovene and published in various magazines and anthologies, including The Mammoth Books of Best British Crime 8, 10 and 11. He has curated a few anthologies, including the best-selling True Brit Grit – with Luca Veste. His blog is here.

Paul is the hardest working man in crime. He’s also one of the most talented. Here he presents his, and the work of many other talents in Exiles. A brief flick through the contributors and you’ll see just want an ‘A Team’ Paul has amassed together. This one is for those days when you want to dip in and out of your noir. – Paul O'Brien

Pacific Coast Highway by James A. Newman (based on a story by Kevin S. Cummings.)

I was hitching outside Frisco in '78 with nothing except time and the road to consider when a '64 Dart pulls up with a huge bear of a man drinking suds with his window rolled down. Reaches out a hand and taps his door.

"You getting in or not?"

He was wearing a Hillbilly blanket coat, plaid shirt and a week's worth of beard. He looked unstable but I'd taken risks before and I'd take them again.

I get in and he drives without words, just the sound of the traffic and radio fuzz and that lump of a man sucking back his beer.

He played with the radio tuner, found some Willie Nelson. Grinned apelike.

"Which way you heading, boy?" He asked.

"It doesn't matter," I said. It didn't. Cities were much the same. You needed them to find work and sometimes find a woman. A small room with a forty-watt bed lamp and a landlady with more rules than the bars and the pool halls. Had a notion of rekindling a high school flame in Frisco but nothing solid. Anyplace would do.

We pull up in one of those scenic spots looking over the city, night had fallen, sunken, twinkling lights from the city below blinked like drunken stars, sounds of birds roosting above in skeletal trees.

He looks over at me says:

"All over," I told him. "been hitching long as I remember."

"So there ain't nobody that knows your whereabouts right about now?"

"Just you and myself."

He opened the window and spat.

Tossed out the beer can.

His face tensed. "See that there seat you're sitting on? The last hitcher and I made it right there on that seat at this here very spot. I say right on the seat, but he was kinda hunched over, one hand on the back of this here head rest the other on the dashboard. You won't wanna go struggle like that 'un did. Because," he held my chin in his tobacco stained fingers and brought my face closer to his "I prefer it when they struggle, see."

I managed a smile and thought of the girl from high-school, the blinking electrical lights and the cool lump of .22 Mexican junk that I kept in a concealed holster for occasions such as these.