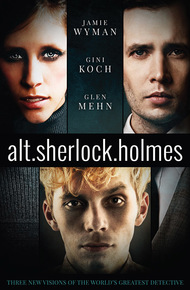 After a misspent adulthood pursuing a Music Education degree, Jamie Wyman (www.jamiewyman.com) fostered several interests before discovering that being an author means never having to get out of pajamas. She has an unhealthy addiction to chai, a passion for circus history, and a questionable hobby that involves putting a flaming torch into her mouth. When she's not traipsing about with her imaginary friends, she lives in Phoenix with two hobbits and two cats. Jamie is proud to say she has a deeply disturbed following at her blog. Jamie's novels Wild Card and Unveiled (Entangled Edge) are available wherever ebooks are sold. You can also find her short story 'The Clever One' in the anthology When The Hero Comes Home 2 (Dragon Moon Press).

Although she's best known for science fiction, paranormal, horror, and fantasy, Gini Koch's (ginikoch.com) first literary love is mystery and suspense, and her first literary crush, at the tender age of 7, was on Sherlock Holmes. Gini writes the fast, fresh and funny Alien/Katherine "Kitty" Katt series for DAW Books, the Necropolis Enforcement Files series, and the Martian Alliance Chronicles series for Musa Publishing, and as G. J. Koch she writes the Alexander Outland series. Gini's made the most of multiple personality disorder by writing under a variety of other pen names as well, including Anita Ensal, Jemma Chase, A. E. Stanton, and J. C. Koch. Her dark secret is that pretty much everything she writes has a mystery in it—because mysteries are the spice of literary life. She can be found on Twitter @GiniKoch.

Glen Mehn (glen.mehn.net) was born and raised in New Orleans, and has since lived in San Francisco, North Carolina, Oxford, Uganda, Zambia, and now lives in London. He's previously been published by Random House Struik and Jurassic London, and is currently working on his first hopefully publishable novel. When not writing, Glen designs innovation programmes that use technology for social good for the Social Innovation Camp and is head of programme at Bethnal Green Ventures. Glen holds a BA in English Literature and Sociology from the University of New Orleans and an MBA from the University of Oxford. Glen has been a bookseller, line cook, lighting and set designer, house painter, IT director, carbon finance consultant, soldier, dishwasher, and innovation programme designer. One day, he might be a writer. He lives in Brixton, which is where you live if you move from New Orleans to London. He moved country five times in two years once, and is happy to stick around for a while. He can be found on Twitter @gmehn.

Brilliant, distracted, sarcastic, abrasive, superior, fiercely loyal and—above all—ferociously principled, Sherlock Holmes is a hero for all times. Every era has its thieves and monsters, its exploiters and abusers, and in every era the detective of Baker Street will piece together the clues and bring the guilty to book.

In alt.sherlock.holmes, the creators of Two Hundred and Twenty-One Baker Streets have invited three talented writers to bring startling visions of the Great Detective and the redoubtable Doctor Watson to the page: as a carnival owner and fortune teller in the 'thirties American Dust Bowl, as a drugged-up, tuned-out weirdnik in 'sixties New York City, and as the most irregular consultant in present-day Hollywood.

The game's afoot! Whether hunting a vandal, a killer, or a shadowy conspiracy, in Indiana, California or New York, Holmes and Watson are on the case.

"Agent Trenet, who is this?" I asked.

Before she could answer, the gypsy spun to face me and thrust his hand across the table. "Vagabond. Performer. Owner and proprietor of Soggiorno Brothers Traveling Wonder Show. I am Crash."

"He's a thief and a liar," Trenet spat. She tossed a lock of blonde hair out of her eyes and put some distance between her and Sanford Haus.

Rather than bristle at the accusations, Haus smiled. He lifted one shoulder in a dismissive shrug and regarded me with interest. "And you, soldier boy? Have you a name?"

I winced as I got to my feet. Shook his hand as I replied, "Jim Walker."

"That I am a—was"—I corrected myself quickly—"a soldier? All that stuff about South Carolina? Alabama? Did she tell you?"

Trenet plopped into the chair I'd just vacated and crossed her arms over her chest. "Here we go."

"You walk with a stiff leg," said Haus as he began to divest himself of Madame Yvonde's ample hips. "The footprint of your right is significantly deeper than that of your left. You've had an injury of some sort that has led to amputation. While that might be more common for a farmer, you dress too well for someone working the fields. You're of an age to have served in the Great War, so I can presume soldier."

Haus shimmied out of the costume while he explained. Beneath all those rags and scarves was a stained undershirt, brown trousers and suspenders. Sanford's arms were ropy sinew and milk-white marble. He threw off the bald cap and tousled his red curls.

"Now, there are very few regiments that are accepting of negroes. It's clear by your accent that you are a northerner. There was one regiment from the North that saw enough fire that might account for your leg, and that was the 369th out of New York. They mustered in South Carolina. I made a very educated guess that you had been part of Harlem's Hellfighters. You confirmed this suspicion when I needled you about Hellfire."

But he went on, enjoying the sound of his own voice. "After you returned from the war, you spent some time at Tuskegee in Alabama. I can tell that by the ring on your right hand, with the school's seal."

"Now we get to the fun part. When you fished out your money, you made the mistake of flashing your badge. I am more than familiar with Pinkerton Agents," he said with a nod to Trenet. "Considering our previous associations, I could only assume that Adele was with you. I stacked the cards and played to that knowledge by giving you The Empress."

Sanford Haus bowed. "I am what I am."