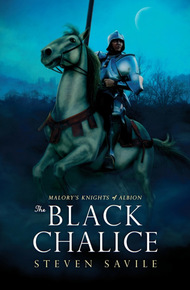 The Black Chalice by Steven Savile

Son of a knight and aspirant to the Round Table, Alymere yearns to take his place in the world, and for a quest to prove his worth. He comes across the foul Devil's Bible - said to have been written in one night by an insane hermit - which leads and drives him, by turns, to seek the unholy Black Chalice. On his quest he will face, and overcome, dire obstacles and cunning enemies, becoming a knight of renown; but the ultimate threat is to his very soul.

But, as Arthur stood before him, it was the king who found himself lost for words. He looked as though he had come face-to-face with a ghost. All colour drained from his face, leaving his complexion waxen where moments before the sting of the wind had made it ruddy. "Can it be? Truly? After all this time?" The king asked, caught between reaching out to touch Alymere's face - as though to confirm he actually stood there - and flinching away from the apparition stood before him. He shook his head as though he couldn't quite bring himself to believe the truth of his own eyes.

"I believe so, my liege," Bors said. For the first time there was nothing jocular about his tone. Alymere didn't understand what it meant. "Roth's blood runs strong in him."

Why were they talking about his father?

"It's uncanny is what it is," Arthur said, not taking his eyes off Alymere for a moment. "It's like he's found his way back through the veil to come before us again in the flesh. I understand why you called the boy a puzzle."

Arthur snapped out of his reverie. "Well, Alymere, son of the forgotten knight, whatever are we to do with you?" There was unexpected gravity to the question. Arthur, unlike Bors, was not merely filling the air with words.

Alymere had practised this moment many a time on the road. He knew exactly what he intended to say, and how he hoped to say it: like a true knight, with humility and honour, underpinned by courage. He assayed a deep bow and spoke to the stone floor. "I have come to serve in any way that I might, sire."

"How do you suppose I might put you to work?" Again, it was a serious question. Already, in these few moments, Alymere believed he had seen the true nature of the king. There was nothing in his demeanour that spoke of folly or frippery. There was no smile as he asked, "Do you have any skills to speak of?" The question mirrored Bors' earlier one, but Arthur did not seek to answer himself.

"I am strong and hardworking. And I learn quickly."

"I am sure you do, lad. But the sad truth is I have stablehands and kitchen boys aplenty. Is there someone in Camelot who would speak for you? Someone who might offer you a bed, or employment so those idle hands don't make the work of the Devil?"

Alymere did his best to hide the crushing disappointment that came with the answer, and what it most likely meant for his aspirations. "No, sire. I do not know any who live within the castle."

Arthur did not answer for a moment, instead he gently adjusted the falcon's tethers. The bird ruffled its wings, seeming about to take flight, but then settled comfortably again on the king's wrist. "You know no-one here and yet you chose to serve in Camelot rather than on your uncle's estates? A curious choice."

"Not so curious, sire. My uncle would rather I were dead with the rest of my kin and I would rather not die quite so young."

"Hold your tongue, boy," the King of Albion admonished him, the sting of his words twice as hard as any blow might have been. He lowered his head. It had not been like this in his imaginings.

"Sorry, sire, but denying the truth helps no-one. In the months since my protectors have entered heaven I have come to understand precisely what my life means to my uncle."

Again there was silence between them, Arthur Pendragon weighing his next few words very carefully. Finally he asked: "And what does it mean? I should very much like to understand."

Alymere met the king's ice-blue eyes and held his gaze. "It is simple, sire. While I live I am a threat to the estates and holdings he calls his own. I have a prior claim to the title. I am the rightful heir to all that he has stolen, not least the title he usurped from my father. And now I have come of age. I am no longer the boy to be watched, I am the man to be dealt with. I have come to serve and swear fealty to the crown and honour to Albion now so that when I return to claim my birthright you will know who I am and will take my pledge that I have acted only in the name of what is just and right."

"Be that as it may," Arthur brushed aside Bors' declaration, "your uncle is one of my knights and I cannot hear words of treachery spoken within these walls. This is Camelot. Do you take my meaning, boy?"

He didn't know what he had expected the king to say, but every time he had acted this meeting out in his mind, the king had never sided with the bastard, Lowick.

"Good. Time will bring what time will bring, and fate is a fickle mistress, so who knows, perhaps one day I will take your pledge, or then again maybe I never will. That is not for us to reason. You are here now and we need to work out what to do with you."