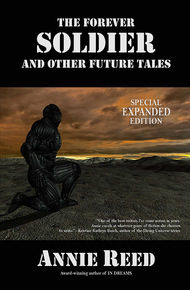 The Forever Soldier and Other Future Tales by Annie Reed

Nine visions of the years to come from award-winning writer Annie Reed.

From the Nevada desert to the far reaches of the galaxy, from the flatlands of the Midwestern United States to a tavern on a distant planet, dive into the exciting—and sometimes terrifying—visions of the future in this special expanded edition of THE FOREVER SOLDIER.

Meet a journalist searching for that one big story, a time-traveling pioneer facing forced retirement, and an old motel owner trying to maintain a sense of normalcy as civilization falls apart around him. Go on a mission with an infantry soldier who can't stop fighting no matter how many times she dies. Take an unexpected trip with a man of legend. And cheer along as an unrepentant liar gets exactly what he deserves.

These stories and more fill the pages of the expanded edition of THE FOREVER SOLDIER and Other Future Tales, exclusively available now only for a short time through StoryBundle.

"I decided what I want on my tombstone," Roger Three said.

Roger Two looked down at Three's inert body. "What, 'death by stupidity'?"

Three laughed, a hollow, empty sound intended to cover the sick pit of the stomach feeling she always got whenever she had to look down at her own body, dead and discarded on the battlefield like so much forgotten trash. "I was thinking more along the lines of 'death by clumsy.'"

Two didn't laugh. Three didn't think she'd ever seen him even smile. Then again, facing the reality of your own dead body wasn't a laughing matter for most Rogers. Three just had a highly evolved sense of gallows humor born of long experience and a desire to stay sane.

A rocket arced overhead, one of the big numbers, the kind that blew out entire buildings without breaking a sweat. The rocket's trajectory pegged it as one of theirs. With any luck it would punch a hole through enemy lines, giving soldiers like Three a chance to fight their way through without getting blown to bits. Unless, of course, they'd blown themselves up from their own damn clumsiness.

The rocket's passing lit up the night sky long enough to give Three a good look at the place where she'd died, not that there was much to see. Nobody lived here, not anymore. Shells of buildings, anything flammable long since burned away, clogged the landscape, the skeletal remains of fire-blackened concrete and grey brick and mortared rock providing a million hiding places for enemy snipers. Asphalt streets had been bombed back to pulverized dirt. Nothing—no books, no transports, no piece of pottery or scrap of paper or childhood photographs—had been left behind by the enemy to mark the passing of whatever race had occupied this world.

Or so the Rogers had been told. Command would tell them anything to make them fight. And die. And fight again, until they were all used up and there was nothing left.

Three's corpse stared up at her with empty eyes. One of her arms and most of a leg were gone. That's what happened when you dropped a live grenade because your fingers were too numb to feel the damn thing. The next thing you knew, you were raiding your own corpse for weapons and gear so you could keep on fighting a war that had gone on so long Three couldn't even remember what planet she was on, much less what they were fighting for.

The ground rumbled beneath Three's feet as the rocket hit its mark. Impact was less than a half mile away by the volume of the explosion, but it was hard to know for sure. Sound echoed and bounced off the walls, was muffled by the debris in the streets.

"We're advancing," Two said. "Move it, or I'll leave you behind." He didn't want to get caught in the crossfire when the enemy retaliated with a rocket of their own. Neither did Three.

She crouched down and removed her helmet from her dead self. Her head lolled sickeningly, bonelessly, on her neck with all the weight of a person but none of the living elasticity of muscle and tendons. Three didn't look at her face. Better to think of the small details—unfasten the chin strap, lift up the head, wipe off the blood—than to think about the reality of what she was doing.

She unstrapped the body armor, well-practiced at this by now, and went about searching her body for any weapons she had left. A rifle and ammo, a few grenades that hadn't gone off when she'd dropped the live one and blown her last self up, a wicked black-bladed knife with a serrated edge and barbed hooks good for ripping out the enemy's guts. Whatever this enemy happened to be. Three hadn't actually seen their faces, only the protective gear they wore. They were bipeds and they bled, that's all Command thought the Rogers needed to know.