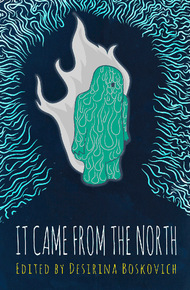 Desirina Boskovich received her bachelor’s in Creative Writing from Emory University in 2005 and attended the Clarion Science Fiction & Fantasy Writers’ Workshop in 2007. Her short fiction has appeared in Clarkesworld Magazine, Realms of Fantasy, Fantasy Magazine, Lightspeed, and Nightmare.

This anthology of Finnish fantasy edited by Desirina Boskovich features fiction from Carita Forsgren, Mari Saario, Johanna Sinisalo, Hannu Rajaniemi, Anne Leinonen, Marko Hautala, Maarit Verronen, Olli Jalonen, Leena Likitalo, Tuomas Kilpi, Tiina Raevaara, Jyrki Vainonen, Sari Peltoniemi, Leena Krohn, and Pasi Ilmari Jääskeläinen—author of the critically acclaimed The Rabbit Back Literature Society. What will you find within these pages? A photographer stumbles on a wounded troll, and attempts to nurse it back to health. A lonely girl discovers the flames in the family smithy are tied to an ancient portal between worlds. A modern woman excavates something sickening from the shower drain…and falls in love. A peculiar swamp holds restorative powers, for its avian and human inhabitants alike. It Came From the North offers a diverse selection of fifteen fantastical tales from some of Finland's most respected writers, alongside up-and-coming talents who are redefining the rules of contemporary literature. Are you ready for a journey into the uncanny? Then come discover the strangeness lurking in the land of a thousand lakes.

Mari Saario is an author, environmental consultant, and mother of three, who devotes her (admittedly limited) spare time to Finnish science fiction fandom. Winner of the Atorox Award in 2009, she has published around twenty short stories in Finnish fanzines and anthologies. For a few years she also served as the main editor of Spin, the oldest fanzine in Finland. In "The Horseshoe Nail," a young girl encounters desperate travelers from another world, and is marked forever ...

They looked down the enormous hole—it was really a huge round pit. Daylight showed in the roof at one place.

Dad wants to know who the hell has lost his keys again, and why isn't the meal ready and waiting on the table.

The rope hung down from the little opening high above their heads. Julian looked round at Anne. "Can you manage to climb up the rope, Anne?" he said, doubtfully.

Mum makes a mistake and says she hasn't seen any keys. Dad says it's not his fault the broad is blind. Besides being ugly.

George went up like a monkey, hand over hand, her legs twisted round the rope. She grinned down when she got to the top.

Once again, Mum doesn't understand and tries to explain that Dad must have laid down his keys himself somewhere last night. The first slap is more like just a push.

Everyone was up in the air, at long last, hot and perspiring. Julian had the precious bag safely under his arm. Timmy the dog sat down panting. Then he suddenly stopped panting and pricked up his ears. "Woof," he said warningly, and stood up. They heard voices coming near.

The second push is harder. Mum trips at the table. A beer bottle starts rolling towards the edge and stops for a moment. Then it falls to pieces on the floor. A smell of fresh beer fills the room. Mum starts to holler. That's the phase when you'd better leave, ‘cause next Dad's going to start the real beating.

Alice tries to get up slowly and move towards the front door. Dad notices her, however, and yells: where's the gadabout thinking of going this time. Just outside, to read. The interruption is enough for Mum who rushes to clean the beer off the floor with a rag. This time it seems to be enough for Dad, too; he goes to the fridge to get a new beer. Alice takes a quick look at the time. Just half an hour to go, then the sports program will start on the TV and it'll all be quiet again.

Outside, on the swing, Alice opens The Five again; after this one's over there'll be only two more left. That's a problem, ‘cause the library doesn't open till Monday, and she'll have read the books long before. Sure, the shelves at home are full of Granny's old books, but most of those are boring or too long. Best to save The Five, she needs something to read for the evening. This one is getting to a real thrilling spot, though of course everything will turn out well in the end. It always does. The librarian has recommended the SOS -series, but Alice finds those too babyish. She is almost nine now and has known how to read since she was five years old.

Perhaps some of the old Super Detectives from the shed, then. Mum says they are silly and dangerous. Silly, yes, but exciting, real killings and such. Through the open window she can hear Dad's voice rising again. No use going inside. She'd have to make do with the Super Detectives.

Dad's cupboard in the shed is full of empty liquor bottles, old murder mysteries, and rusty car parts. Alice reaches for a couple of the magazines, careful not to knock the bottles. The clinking is just as disgusting as the smell caught in the Super Detectives. Underneath the pile there are some she hasn't read yet. Alice grabs three and wonders where to go so as not to hear the voices from the house. The worst is to almost hear: then you imagine hearing even when you don't want to. She doesn't have her boots on, however, so the woods are out, and there'd be mosquitoes by the quay. But the smithy would be fine.

The path towards the smithy has become overgrown with grass, but the fresh grass rebounds immediately after her steps. Nobody would notice anyone's gone to the smithy. Besides, it's too far to serve as a junk shed or Dad's booze hide. From inside, the grey hut seems almost like Alice imagines it had been in the old times. Two unbroken windows give light; in the forge the last coals are still left and rusted tongs hang from the wall hooks. No one except Alice ever goes to the smithy, and she always tries to leave it exactly the same. The discarded tools feel sad, but as long as they stay in place, there's something left of Granddad Frank.

Here, in the smithy, the Granddad of the stories feels real, the master-smith whom the old people of the village remember, when Alice has asked questions. Granddad had been a go-getter, the first person to get a car and to put up electricity in several houses without any other learning than his own cleverness. He knew the old skills, too, and could hammer a cartwheel or a horseshoe as well as his own father, the former master-smith. He'd been an intelligent and kind man.

Carefully Alice opens the squeaking door of the smithy. Actually, she sometimes misses Granddad more than any other grownup. Granddad had been in the war and got bomb slivers in his stomach, and then some kind of cancer had grown by the slivers and he had died when Dad was just a kid. And no one has touched the forge and tools since then. Now the smithy is the only quiet place for Alice to come and read Super Detectives. She shuts the door behind her and bolts it; Dad need not have access here. Alice sits on the extra anvil block under the window and opens the adventure comics. Perhaps she'll have time for two magazines; then it will get too dark. But by then it'll be quiet at home, too.