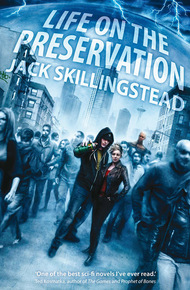 Jack Skillingstead grew up in a working class neighbourhood south of Seattle. He dropped out of college to work in a cannery in Alaska, later travelling to Maine and then returning to the Pacific northwest. Skillingstead won a writing competition sponsored by Stephen King in 2000, and was a finalist for the Sturgeon award in 2004. He has published more than forty short stories in publications including Asimov's, F&SF and Realms of Fantasy. His work has also appeared in various Year's Best volumes and Solaris Rising.

Life on the Preservation by Jack Skillingstead

Inside the Seattle Preservation Dome, it's always the Fifth of October, the city caught in an endless time loop. Outside, the world lies in apocalyptic ruin. "Reformed" graffiti artist Ian Palmer is the only one who knows the truth, and he is desperate to wake up the rest of the city before the alien Curator of the living museum erases Ian's identity forever.

Small-town teenager Kylie is one of the few survivors to escape both the initial shock wave and the poison rains that followed. Now she must make her way across the blasted lands, pursued by a mad priest and menaced by skin-and-bone things that might once have been human. Her destination is the Preservation, and her mission is to destroy it. But once inside, she meets Ian, and together they discover that the Preservation's reality is even stranger than it appears.

A YEAR AFTER the world ended, Kylie sat on the floor at her boyfriend's house, picking through stacks of DVDs. The living room was small and over-crowded with deep bookcases, bulky leather chairs and a matching sofa big as a Buick. The carpet held dust like a dry sponge. It hadn't been vacuumed since Judgment Day. Once a week a power strip drew electricity for the TV setup plus one pole lamp. A thick extension cord snaked out of the living room and through the kitchen window to a noisy generator on the back porch. Most of the time Kylie was used to the lack of animating electricity. But when movie night ended and Billy switched the gennie off, the house always felt dead to her again. She wouldn't give up the movies, though. Not for anything.

Kylie was eighteen and hungry for things she couldn't have. "This one?" she said, holding up a movie.

Billy slumped in a corner of the sofa with a warm can of Mountain Dew in his lap. He looked up. His shaggy beard and patchy hair made him look older than he really was – though he was already pretty old for Kylie. At thirty-five Billy was played out, overweight, and impotent. Well, all the men in Oakdale were impotent, not just Billy; the poison rain saw to that. It also accounted for the patchy hair. At least Billy hadn't scabbed up yet. His eyes were mostly clear, his finger and toe nails hadn't fallen off, his breath was mostly okay. It was all coming, though; everybody got it bad, eventually. Everybody except Kylie.

Usually Billy drank beer or wine, especially on movie night. The Mountain Dew didn't make him as happy. Not that he was ever exactly 'happy'. But when he was drunk, at least, he tended to be less gloomy. Billy wasn't drunk now. His shirt was untucked and missing a couple of buttons. Billy's navel squinted in a wiry tangle of black hair. He nodded at Kylie's movie choice. "Again? Sure, yeah."

The cover of the DVD case depicted a man and a woman: John Cusack and Ione Skye – Lloyd and Diane in the movie; two people no doubt annihilated by The Judgment (as Father Jim called it) but miraculously existent in Kylie's hand, their endlessly repeating lives waiting to be unlocked by laser light. Kylie pried the case open. She tilted the silver disk under the lamp, watching colors bend over its surface. Then she fed it into the machine and sat next to Billy on the sofa. He slung his arm around her, pointed the clicker and pushed PLAY. The empty blue screen filled with images of a lost world and the things Kylie couldn't have.

Two hours later she said, "They were meant for each other."

She snuggled against his body. He was big and warm. Well, he was bound to be big, with all the crap he ate. Kylie rested her head on his chest, which rose and subsided heavily with each breath. Her nose twitched at the sour smell of his sweat. But she didn't mind that. He took care of her, protected her. She thought: I love him. Like telling herself something and hoping she believed it. I love Billy. But maybe not like Diane loved Lloyd.

Billy came from outside the town. This was almost unheard of. Wanderers did occasionally straggle into Oakdale but they tended to straggle right back out again. Unless they were skin-and-bone people, SABs, in which case townies drove them back out. Billy had grown up in Oakdale, but had been gone almost as long as Kylie had been alive, and so his arrival in the aftermath of disaster was simply a return home.

"Do you want to watch a sex one now?" she asked. Kylie didn't really get the sex movies, the pornos. But sometimes watching a little of one got Billy in the mood, even if his poisoned body could no longer perform the way men in those movies did. Kylie was more turned on by love scenes. In a love scene you saw people who cared about each other kissing and caressing. Maybe once in a while there was a bare breast or exposed behind, but it was the love that mattered. Kylie was the youngest survivor in town and the only one not sick. That's probably why she still cared about love scenes.

He patted her shoulder. "I don't really like them anymore," he said. "They're depressing."

"Oh. What about one of your gangster movies or Westerns?"

They were quiet a while.

Billy grunted. He turned off the TV and the DVD player then got up to kill the generator. He carried his extra weight awkwardly. Billy ate a lot of crap food. He hoarded it in the spare bedroom, cases of Doritos, potato chips, candy bars and soda pop. "Might as well eat what I want," he liked to say. "All bets are off."

Kylie lit a candle that smelled like strawberries. A minute later the generator cut out. In the absence of its muted racket the profound silence of the world returned. It was God listening to the souls of the survivors. That's what Father Jim said, and the hundred or so dying, rag-tail remnant souls of Oakdale believed in Father Jim. Kylie used to believe in him, too. In fact, she used to be hooked up with him – definitely not like Diane and Lloyd; but all that was before.

To Kylie the silence was like a bottomless well into which everything she knew had been discarded – every comfort and familiar joy and expectation, every hope. Even Kylie's father was in the well, she supposed, though he had been gone anyway for many years. Her mother, who said her rosary every day, maintained her own silence on the subject of Kylie's father. He was dead by now, anyway. The Judgment had killed almost everybody outright. Those few who survived were dying by slow inches.