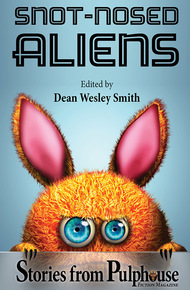 When you ask a bunch of professional writers to send in stories to a Pulphouse Fiction Magazine anthology called Snot-Nosed Aliens, you get a bunch of really, really strange stories. Perfect.

When you ask a bunch of professional writers to send in stories to a Pulphouse Fiction Magazine anthology called "Snot-Nosed Aliens," you get a bunch of really, really strange stories, which is exactly what I had been hoping to get.

And I already had four stories that I loved and wanted in this book. And the publisher of WMG Publishing had given me a strict word limit of how large this book could be.

So in come the stories. Forty-six strange and wonderful stories to be exact. Depending on length, I could buy eight or so more stories out of those forty-six. Yikes!

And all the writers were professional, so all the stories were good.

Luckily, I also had regular issues of Pulphouse Fiction Magazine I could buy stories for as well, and that helped ease the pressure some. But still, I had a lot of aliens. Way, way too many great alien stories, fun alien stories, weird alien stories.

In other words, I was a very lucky editor and I knew it. The writers had made my job difficult by sending me far too many great stories. But after a bunch of time shuffling and swearing and laughing, I managed to get this crazy project down to thirteen alien stories.

They are all original to this volume and a final reward for everyone who supported the Pulphouse Fiction Magazine Kickstarter campaign that helped us get the magazine going almost two years ago. So thank you for your support.

Pulphouse Fiction Magazine is going strong and I am having a wonderful time finding great stories for both the magazine and for fun books like this one.

I sure hope you enjoy these original stories. I sure did.