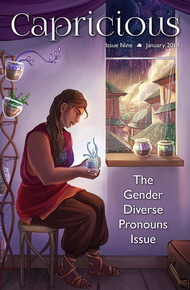 Andi C. Buchanan is a writer and editor based near Wellington, Aotearoa New Zealand. Their recent novella, From A Shadow Grave uses a historical murder as a launching point into narratives of multiple possible futures, deploying urban fantasy, historical fiction, time travel and more. Andi's short fiction is published in Fireside, Apex, Kaleidotrope, Glittership, and more. You can find them on Twitter @andicbuchanan or at https://andicbuchanan.org.

"It was odd, being friends with one of the fae. Pronoun sets were the least of it, of course; Jeb even had human friends who rotated theirs, though not with the seasons, not as spring bloomed into summer mellowed into autumn crept slowly into winter's sleep. This thing, the plants Jeb grew having odd properties and growing too fast, that had never happened before ey met Nederene. No one else seemed able to find the garden, either."

These ten stories (all of which use gender diverse pronouns) are stories of love, fear, transformation, and the journeys we must sometimes take. Stories of those whose gender changes, whose gender is undecided, whose gender does not exist, or whose gender is pivotal to their self. Stories set in our own world, in far-away galaxies, or in worlds of fairy tale and myth, and stories which introduce us to ghosts, merfolk, dragons, and aliens, to strangers, to communities, and to ourselves.

Andi and I met through the Outer Alliance, an online organization for LGBTQ and allied science fiction and fantasy writers first, then in person at the 2016 Au Contraire Con in New Zealand. At that point, Andi had just begun working on editing and publishing Capricious SF, a new magazine of literary and experimental speculative fiction and criticism. The Gender Diverse Pronoun issue is #9 and it includes stories by Nino Cipri, Bogi Takács and eight writers creating fiction that takes the reader outside the notion of binary gender. Lots of great stories in this one! – Catherine Lundoff

From "Sandals Full of Rainwater" by A.E. Prevost

Piscrandiol Deigadis clutched the battered suitcase close, jars rattling inside as the train whined and staggered to a halt. Piscrandiol waited, eyes shut tight, feet and elbows pressing in all around them as passengers rushed for the exit. Over the din of disembarking, the rain made itself insistently known on the steel roof of the car.

The rain had started sixteen miles back, well beyond the border that separated Piscrandiol's native Salphaneyin from Orpanthyre. It had begun as a mist and crested to a deluge, and it had cracked Piscrandiol's life wide open like a miracle. Piscrandiol pressed their palm against the cool glass, heart pounding. Every trickle of water on the other side ghosted a kiss across their skin.

It had not rained in Salphaneyin for so long.

Orpanthyre was a city of rain, a city where no one went thirsty and anyone could find work. The storm battered against the tarred roof of the train station like a thousand shouted promises as Piscrandiol waited for the exodus to subside. Finally, Piscrandiol took a breath, adjusted their skirts, and stepped out onto the platform.

The street outside the station was a noisy jumble: handcarts and chickens and babies, sunken-eyed miners, families struggling not to lose sight of each other in the heaving human tide. Copper roofs covered the downtown sidewalks, patina battered by seasons of rain, which traced elegant green arcs against a backdrop of stone and wood. Piscrandiol let the flow of the crowd lead them away from the station.

Despite the roofs, there was water everywhere: splashed up by carriage wheels and the jostling steps of strangers, pouring out of the rumbling and broken-open sky, rushing down cast iron eavestroughs and churning white in the grate-covered gutters by Piscrandiol's feet. It was an excess, an exuberance of water, enough to fill every well in Salphaneyin. It sloshed through Piscrandiol's sandals and weighed down the hem of their skirts like it had nowhere better to be.

Piscrandiol braced themselves against a stone wall at a crossroads where the crowd thinned out, and forced down a breath, eyes closing for a fluttering moment of reprieve. In just a short while, they'd reunite with their cousin Geluol, who'd left for the city three years ago. There would be a meal, a roof, a bed. All Piscrandiol had to do was keep their feet moving towards Seven Ingot Three Homeshare, and then the ordeal of traveling would be over.

"If it's an umbrella you need, you've certainly come to the right place."

Piscrandiol's knuckles turned white on the handle of their bag. They turned to the source of the voice – tall and ruddy-tan, with elaborate clothes, standing beside a narrow cart hung with dozens of colourful umbrellas.

The stranger graced Piscrandiol with a businesslike smile. "New to the city?"

Piscrandiol nodded, years of Orpan language classes tumbling together and screeching to a halt in their mouth.

"You'll need one of these – get you started right. Salphaney, aren't you? Lots of you coming 'round these days."

Piscrandiol nodded again. They could feel the blush seeping into their cheeks, volunteering all the information their words couldn't provide.

The umbrella-seller smirked. "Look, I've got a nice blue one that matches yunna skirt. Fifteen lam."

Piscrandiol's mind stumbled over the pronoun – first gender, if they remembered right, but was it Piscrandiol they saw that way, or themselves? Piscrandiol had encountered the concept of gender at school, of course, when they'd studied the Orpan language with everyone else, but having it thrown at them in conversation shattered six semesters' worth of confidence.

Piscrandiol shook their head. "I'm sorry," they managed, handing over a few coins before the umbrella seller could say anything else. "I'm sorry." They grabbed the umbrella and hurried back into the crowd.