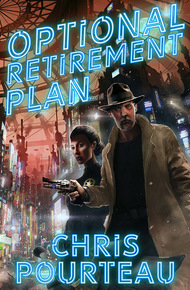 Chris Pourteau is the bestselling author of the sci-fi thriller novels of the SynCorp Saga (co-authored with David Bruns), the post-apocalyptic Serenity Strain novels, and the military sci-fi collection Tales of B-Company. His first novel, Shadows Burned In, earned the 2015 eLit Book Awards Gold Medal for Literary Fiction. The Lazarus Protocol, the first novel in the SynCorp Saga, placed in the Top Ten in Read Freely's 2018 50 Best Indie Book of the Year contest; it was the highest-rated Sci-Fi novel in the contest.

He's also edited and curated bestselling short story collections including the two animal-centric collections Tails of the Apocalypse and Tails of Dystopia (with Samuel Peralta), as well as Bridge Across the Stars, a collection of Sci-Fi stories from indie and traditionally published authors published by Sci-Fi Bridge, which Chris co-founded. His dayjob is editor-in-chief for the Texas A&M Transportation Institute, which researches cutting-edge technologies across the transportation spectrum.

When he's not writing, editing, or working the dayjob, Chris loves exercising regularly, watching shows like Star Trek and Stranger Things, and reading his favorite authors. Those include Bernard Cornwell, Stephen King, George R.R. Martin, Edgar Allan Poe, and Max Collins. He lives in Texas with his wife, son, and two dogs. (He's a HUGE dog person, by the way.)

When retiring isn't an option, it's kill or be killed.

Stacks Fischer is a killer for hire. For more than three decades, he's loyally served the Syndicate Corporation as its most-feared and respected enforcer around the solar system. He's buried the company's dirty laundry six feet deep, no matter who had to be taken out to do it.  Now, Stacks has a problem—he's losing his mind to an incurable form of dementia, and unwittingly spilling corporate secrets in public.  When SynCorp decides Fischer has outlived his usefulness, they decide it's time to permanently retire him. But Stacks isn't quite ready to go. With every one of SynCorp's Five Factions gunning for him—and his own mind slowly rebelling—Fischer leads a pack of would-be assassins in a final, deadly chase across the solar system.  The old hitman refuses to fade quietly into oblivion at the hands of his disease or the business he's dedicated his life to. He's choosing an Optional Retirement Plan.  Don't miss this pulse-pounding science fiction thriller filled with twists that will leave you on the edge of your seat. It's perfect for fans of Titanborn, The Expanse, and Minority Report.

I love books and stories in which the protagonist's grip on reality is slipping away, and what is and isn't true may not be clear. That's one reason I fell for this epic tale of one hitman's fight to survive as his own mind betrays him. Chris Porteau found a unique approach to the assassin-on-the-run theme and punched the accelerator hard to keep the excitement coming. I couldn't be happier that this stunning book by this consummate author is part of the bundle, adding more twists and thrills to a set that's already dialed all the way up to eleven. – Robert Jeschonek

So, this is how it started. I knew something was up when Tony Two-point-oh called me in. I mean, I never see him in person anymore. Haven't for years.

He left me waiting out front with his latest receptionist. You know the one. She wears her skirts high and her shirts low. She looks like an hourglass with legs. She flirts with her eyes just to give you something else to look at now and then.

She's part of a carefully orchestrated impression he likes to make on those Tony Taulke summons to see him. You've been there, right? Or maybe you haven't. No offense, but I expect you've never had a one-on-one with Tony. Just nod if you—no? Right, then.

Well, you walk off the vator onto this red marble floor imported from Mars. What does that tell you? The logo for the Syndicate Corporation is carved right into it in diamond and platinum brought up from Earth. I bet he spent more SCDs on the floor than you and I've made all our lives. And we're well paid for our services. That floor tells you all you need to know, right?

When you sit, there's the bust of Napoleon on the receptionist's desk looking down on you. Spanning the wall behind her, there's the hand-painted recreation of a Michelangelo fresco—the one where God is giving the finger of life to Adam. Sitting on the couch waiting for Tony, you can't help but stare at it. Even if you miss Nappy's condescending gaze.

Oh, yeah, and if none of that impresses you, there's the life-sized, petrified, bona fide T-Rex head. I'm not kidding. It's under glass, off in its own corner that's larger than the rest of the lobby combined. The actual skull of a Tyrannosaurus Rex.

Now, add Marakesh's seductive smile and inviting cleavage to the mix. That's the receptionist's name, by the way. Everyone calls her Kesh. Everyone but me. I'm old fashioned. I call her Mary. It helps keep my thoughts on the purer side. That's the theory, anyway.

All that adds up to feeling a little overwhelmed and a lot underready for a meeting with Tony Two-point-oh. He leaves people out there a good fifteen to twenty minutes past their appointment time, with nothing to look at but intimidation. It makes them edgy. It gives him the edge.

Tony has issues. But he knows what he's doing.

Not so long ago, I might've even been in Mary's chair. Those were the days when I was Tony's go-to guy. Long time ago. Who Tony puts at the desk depends on the visitor and the reason for the visit. When something less pretty and more deadly was needed, I'd be called in.

When someone stepped off the vator who'd never been there before, I'd enjoy seeing their reaction. Watching Tony's power register on the summonee's face.

First, the curiosity at the clashing décor and the floor that could buy most family lines a few times over. After a few minutes, that'd give way to an appreciation for the power of the man that could afford it all. Then the summonee starts to fidget and become more and more uncomfortable waiting on the couch. It's like a visit to the principal's office, if the principal is late to the meeting and likely to be armed. By the time Tony's door opens, they're glad to see him just to end the waiting and get out of that damned lobby.

It's all theater, you know. That's what half of managing people is, if you do it right. Handling them into doing what you want them to. Stage direction. The pregnant pause in the conversation. The wry smile and cold stare. As they say, it's not in the writing—it's in the directing.

That day it was me on the couch. And worse, I knew exactly what Tony was doing. I just explained it to you.

It's not the T-Rex that's getting on my nerves. It's not knowing why I'm sitting there. I have no idea why Tony's called me in. All I got was the command performance notification from Mary. But it's not my birthday, I can tell you that.

I check the chrono on the wall. I've been sitting there exactly sixteen minutes. We're in the sweet spot. Or the sweat spot, as Tony used to call it. As I wait, I wonder if he still calls it that. How would I know? I haven't seen him in years.

"Any idea what this is about?"

Mary makes a show of being busy, as she has since I stepped off the vator. She'd greeted me, but a little coldly, now that I think about it. She pulls up something onscreen and looks closely at it, completing some task before glancing my way. Then those eyes flutter at me and even seem happy they're doing it.

"No idea, Mr. Fischer. He just told me to have you come in." She smiles. Like having me there has made the burden of walking on Martian red marble somehow more bearable.

Wait … Mr. Fischer? Since when are we on a last-name basis?

"If it's about the Qinlao job, I already reported to the CIO. Done, untraceable. The change in operatives—"

Flutter-flutter. Smile, with less enjoyment as an ingredient this time. Cold. I'm busy. Please wait till your number's called.

Mary startles, as if she's just received an electric shock. She taps the skin just behind her right ear. That's where she opted to have her SCI installed, I guess. Saved by the tingle.

"SynCorp, Mr. Taulke's office." She pauses, her eyes roaming the wall behind me, scanning everywhere but my face. Interesting. Hadn't noticed that before. When she thinks, Mary doesn't actually look you in the eye. Noted.

That's when I realize I've slipped into tactical mode. Been that way since before I sat down in front of God and Napoleon and King T. I've been making mental notes of my surroundings, Mary's behavior, and paths of escape. But I know if Tony Two-point-oh wants me dead, there is no escape. Then again, if he wanted me dead, I'd already be cooling to room temperature somewhere else. Somewhere without imported marble floors.

Knowing I'm hyperaware makes me antsy. I focus on God touching the tip of Adam's finger. The Lord looks slightly amused to me. Realizing I hadn't been aware before of being hyperaware spooks me. I used to be more self-aware than that. Now I'm really nervous.

I never get nervous. Nervous isn't in my job description.

"Sure, send him in," Mary says, flitting a knowing look my way.

The vator opens and out steps Richard Strunk, Tony's current right-hand man. There's no love lost there for me. As I got older, Tony decided he wanted a younger, faster, more-energetic enforcer watching his ass for him. That's when I learned that bodyguards are like women—as they get older and less confident, men always want a younger one. So I was packed off to contract work. Not that I'm complaining. I eat regular.

Strunk throws me a look as he passes. It's sort of an inversion of Mary's expression. Where hers was sweet and distant, his is wry and intimate. Like he can't wait to tell me the punchline to a joke I've already heard the set-up for. But it's a joke I'm not in on, at least not yet. I swear—he makes an effort not to wink.

Mary presses a button and Tony's door disappears into the wall. Strunk passes through. A hiss and Tony's hermetically sealed in again, safe from the common folk. What's happening here?

I swing back to Mary, looking for an ally.